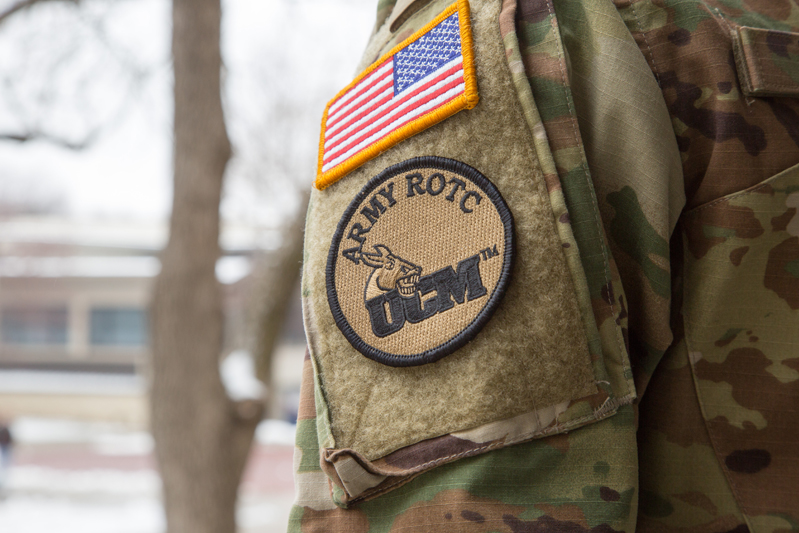 Army ROTC is one of the best leadership courses in the country and is part of your college curriculum.  The skills and competencies you gain in ROTC will make you exceptionally attractive to both military and civilian employers.

The Bataan Memorial Death March is a challenging 26.2 mile marathon through the high desert terrain of the White Sands Missile Range in New Mexico. This memorial march is conducted in honor of the heroic service members who defended the Philippine Islands during WWII, sacrificing their freedom, health, and in many cases, their lives. Sponsored by the White Sands Missile Range, the New Mexico National Guard, and the New Mexico State University Army ROTC Department.

You will gain necessary skills in leadership and adaptability while participating in field training (both locally and at Fort Riley, KS), as well as learning battlefield tactics and decision making.

Serve as a member of the color guard and learn the proper procedures for presenting the colors.  Once trained, you will get the opportunity to represent the ROTC program in public at sporting events, Central Missouri Police Academy graduation, and other events.

Join the Fighting Mules Battalion and get involved at UCM by leading the cannon crew and push up crew during Mules football games.

Show Your Fighting Mules Battalion Pride! Check out our selection of merchandise at the UCM Bookstore.

The Mission of the Fighting Mules Battalion is select, train, retain, develop, and commission high quality future leaders for the United States Army and the nation.   ROTC offers you the opportunity to earn a high-quality college degree while becoming a commissioned officer - for individuals with no prior army experience, active duty, or reserve.  Our program has been consistently recognized locally and nationally as a top ROTC battalion.

A Career - not just a degree

The Military Science & Leadership Minor pairs well with any career field and provides a seamless transition into the U.S. Army.  Recent graduates received bachelor's degrees in aviation, criminal justice, nursing, and marketing that paved the way for their duty assignment.

Your courses will build a firm foundation of military knowledge and skills. As you take upper-level courses you will learn to be an articulate leader through theory and practical application. You’ll gain experience propelling off a building and leading small units in simulated tactical missions.

UCM is a Military Friendly School

The Military and Veterans Success Center connects you with fellow military and veteran students, study groups, a computer lab, and support from dedicated staff members.

Electives (3 - 8 hours from the choices below):

MS 1110 Introduction to the Army and Critical Thinking

MS 1120 Introduction to the Profession of Arms

Speak with your Success Advisor about creating your completion plan to ensure you meet all ROTC and all major requirements.

You can make an appointment with your Advisor online!  https://ucmo.campus.eab.com/student/appointments/new

An exclusive opportunity to arrive on campus early, meet the cadre and  staff, as well as your fellow cadets, and settle in to life at UCM.  This week-long orientation includes social events as well as practical information and training such as learning your new routine, preparing a MRE (Meals-Ready-to-Eat), and  hearing from distinguished speakers.

Cadets are chosen for a one-month deployment that allows them to practice their leadership skills while gaining exposure to other cultures, languages and different views from around the world.

This competition is conducted over two days on a non-tactical course. The mission is to challenge Cadets' mental and physical toughness and to develop leadership while fostering teamwork and esprit-de-corps. Teams participate in nine graded events.

The Bataan Memorial Death March is a challenging 26.2 mile marathon through the high desert terrain of the White Sands Missile Range in New Mexico. This memorial march is conducted in honor of the heroic service members who defended the Philippine Islands during WWII, sacrificing their freedom, health, and in many cases, their lives. Sponsored by the White Sands Missile Range, the New Mexico National Guard, and the New Mexico State University Army ROTC Department.

Serve as a member of the color guard and learn the proper procedures for presenting the colors.  Once trained, you will get the opportunity to represent the ROTC program in public at sporting events, Central Missouri Police Academy graduation, and other events.

Join the Fighting Mules Battalion and get involved at UCM by leading the cannon crew and push up crew during Mules football games.

Army ROTC Scholarship Programs provide financial assistance for the education and training of motivated young men and women who desire to serve as Army officers after graduation from college.

Manage your scholarship through GoArmyEd.

The UCM Office of Military and Veterans Services is a good resource for connecting with military services.

The SMP is a volunteer officer training program that allows Army National Guard and Army Reserve enlisted members to participate in the Advance ROTC Program. Upon completion of Basic Training, a reserve component soldier that is an academic sophomore can join ROTC and earn a commission as an officer in the United States Army upon graduation.

In addition, contracted non-scholarship ROTC cadets and Reserve Forces Duty (RFD) scholarship cadets can join a reserve component unit and the SMP. The intent of the SMP is to increase officer accessions into the Reserve Components by increasing ROTC enrollment from enlisted National Guard and Reserve members who are attending college.

What is SMP to me?

What do I need to do to enroll in SMP?

If you are currently on active duty as an enlisted soldier Army ROTC can help you continue to grow and learn.  The Army Green to Gold program provides options for soldiers interested in pursuing a baccalaureate or graduate degree and earning a commission as an Army Officer.

and will have completed two years of active duty service before school starts and are accepted by a college or university as either a freshman, sophomore, or junior, you can compete for a Green to Gold four-, three-or two-year scholarship. The deadline for applying is 1 April. Selection deadline is 20 May.

The Reserve Officer Training Corps (ROTC) provides an opportunity for college nursing students to receive practical, hands-on leadership experience directly applicable to nursing practice. As a Registered Nurse, you are looked at as a leader in providing nursing care. But how can a person become a leader if they have never been given the skills to walk in that role? The Army ROTC Nurse Program is one avenue to acquire these skills. The Army ROTC Nurse Program provides nursing students the opportunity to develop management, communication and decision-making skills in a non-threatening environment. There are many advantages to becoming an Army Nurse.

An article by Michael Maddox on the US Army website highlights Cadet Tuttle and her career path.  A mother of two, she achieved the rank of Staff Sergeant and chose to transition to ROTC through the Green to Gold program.

Check out these links to get more information about: As the Commanding General of the 99th RSC, Major General Kok is responsible for administrative, logistics, and facilities support to more than 44,000 Army Reserve Soldiers across a region spanning thirteen Northeastern states. He also serves as the Senior Commander of JB MDL and US Army Base Fort Devens Training Facilities and Training Support.

He began his military career when he enlisted in the Army Reserve in 1982. He received his commission through the Reserve Officers Training Corps (ROTC) at Central Missouri State University as a Quartermaster Officer in 1984, and graduated with a Bachelor of Science degree in Aviation Maintenance Technology in 1986. He received his Master of Science degree in Aviation Safety two years later, and as a First Lieutenant, he transferred to the Aviation branch while serving with the 219th Transportation Company at Scott Air Force Base (AFB), Illinois. Over his 34 year career, and over 26 years on Active Guard Reserve duty, Major General Kok had the opportunity to serve at over 10 duty locations including three separate Battalion commands.

Major General Kok was deployed in January 2003 with the 377th Theater Sustainment Command in support of Operation Iraqi Freedom (OIF), serving as the Theater Transportation Officer in the Distribution Management Center. Major General Kok returned to Kuwait in January 2004 and served as Planning Officer for the Deployment / Redeployment Operations Center OIF I and II rotations. After completing his second tour, Major General Kok was selected to command the Bison Battalion, ROTC unit at Bucknell University, Pennsylvania, from 2005 to 2006, where he served as the Professor of Military Science. From 2006 to 2008, he commanded the 229th Aviation Regiment at Fort Knox, Kentucky, and a year later was assigned to serve as the Command Recruiting Officer of the 11th Aviation Command.

Major General Kok returned to Scott AFB from 2009 to 2011, where he served as the Deputy Director-Reserve Affairs and Deputy Commander-Joint Transportation Reserve at the United States Transportation Command. He was subsequently assigned to United States Army Civil Affairs and Psychological Operations Command (Airborne) at Fort Bragg, North Carolina, as Assistant Chief of Staff, G4, and Special Assistant to the CG. In 2012, Major General Kok was selected to command the 11th Theater Aviation Command at Fort Knox, Kentucky, and served as the Commander for Army Reserve Aviation leading to his previous assignment with USAREC as the DCG-S.

His awards include the Defense Superior Service Medal, Legion of Merit (with Oak Leaf Cluster), the Bronze Star Medal (with Oak Leaf Cluster), the Senior Army Aviation Badge, the Parachutist Badge, and the Pathfinder Badge. He has attended numerous Army schools, including the Aviation Officer Basic and Advanced Courses, the Combined Arms and Services Staff School, the Army War College, and the Joint and Combined Warfighting School.

Major General Kok resides in Kentucky with his wife and children. Arnold N. Gordon-Bray completed 30+ years of service in the United States Army where he demonstrated professional leadership skills in strategic communications, combat operations, foreign affairs and effective modernization in support of the Department of Defense and National Interests. He currently consults on Strategy, Operations, and humanitarian issues.

Gordon-Bray has extensive experience in commanding various levels of military forces from a platoon of 40 military service members to spearheading military operations in Iraq with a Brigade Combat Team consisting of over 4,500 men and women with the 2nd Brigade of the 82nd Airborne Division.  He has transitioned his global Strategic views on issues of leadership, diversity, veteran’s needs and education across America.

He has also held staff positions at virtually every level including: a Division Chief in the Joint Special Operations command at Fort Bragg, North Carolina, The Directorate in The installation Management Command (IMCOM), headquartered in San Antonio, Texas, for all Army bases World-wide and culminated his career in a 4-Star Headquarters (AFRICOM) as Deputy Director for Operations. Throughout his career he has demonstrated exceptional leadership in the toughest environments. General Gordon-Bray was a direct contributor to the War in Iraq where he fought and provided unique insights about transitioning. During the surge of 2007, as Principal Advisor to the Iraqi Ground Forces Commander, he aided in transforming 35,000 Iraqis into a force of 300,000 with 6 Divisions capable of functioning independently. Gordon-Bray had direct responsibility for training and mentoring Lieutenant General Ali, who later became the longest tenured military leader in the new Iraqi Army. In addition to conventional concepts of warfighting, General Gordon-Bray was vital in providing initial thoughts on AFRICOM operations and end-state for Odyssey Dawn—the first large-scale regional operation for AFRICOM. A broad thinker, his strategic input and leadership skills were routinely employed in establishing US relationships with African Leaders and US State Department personnel, often operating at the behest of other Directorates or the Combatant Commander.

General Gordon-Bray is also an effective leader with extensive skills in modernization and experimentation. As a Colonel, he developed and led the Army’s Experimentation Community of Practice, a diverse team of over 1000 operators, experimenters and innovative developers. He also led, managed, resourced and synchronized over 100 Joint and Army experiments involving thousands of participants that ultimately developed and refined the modular Army and its current successor.