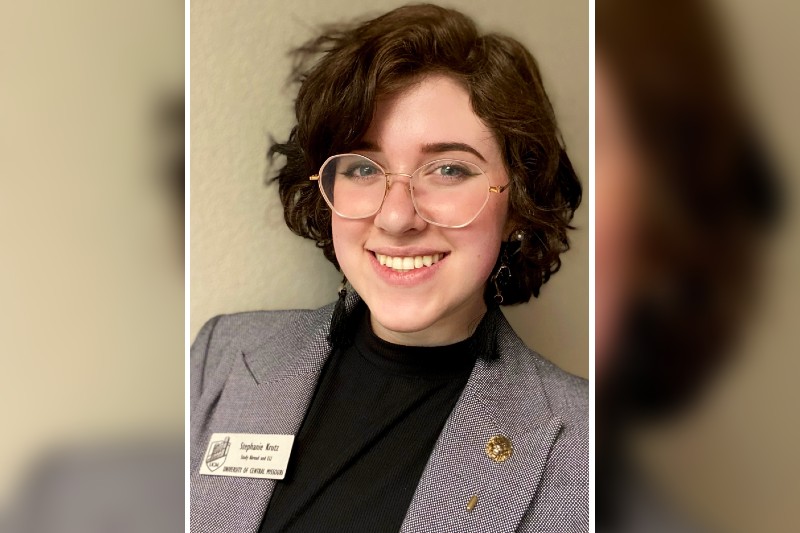 A University of Central Missouri graduate student with a passion for study abroad, Stephanie Krutz has the opportunity of a lifetime through her selection as a Finalist in the Fulbright Program.

WARRENSBURG, MO – Persistence and a never-give-up attitude have prevailed for University of Central Missouri graduate student from Kansas City, Stephanie Krutz. She has been named a Finalist in the prestigious Fulbright Program, making possible her dream to pursue an international study opportunity created through this federally funded initiative.

Krutz was one of four UCM students who were initially named Semi-Finalists in the program, which was a record for the university.  Twelve UCM students applied for this opportunity during the fall 2021 semester, which was also a record. Krutz, however, is the only one of the group to reach Finalist status.

The Fulbright Program is the United States’ flagship international exchange program designed to increase mutual understanding between students in the U.S. and people in more than 160 other nations that are part of this program. Fulbright is made possible through an annual appropriation of funding by Congress to the U.S. Department of State, Bureau of Educational and Cultural Affairs, and also benefits from direct and indirect support from participating governments, host institutions, corporations, and foundations in the U.S. and abroad. Students who receive Fulbright grants are selected on the basis of academic or professional achievement. They also must demonstrate leadership potential within their chosen fields.

“I just want to give a big thank you to all of the people who supported me through this entire process,” Krutz said.

Krutz, who received a Bachelor of Arts in Modern Languages – Spanish, with minors in International Studies and Leadership Studies in spring 2021, plans to graduate in May 2023  from UCM with a Master of Science in Education (MSE) in English Language Learners ((ELL) Teaching English as a Second Language (TESL), a joint program of the College of Education and the School of English and Philosophy in the College of  Arts, Humanities, and Social Sciences. As a Fulbright recipient she will travel to Uruguay, where she will spend March through November 2023 serving as an English Teaching Assistant. Her selection celebrates two attempts she has made since 2020 to be accepted into the Fulbright Program.

“I applied in 2020 for Fulbright before I graduated from UCM as an undergraduate. Unfortunately, I wasn’t selected as a Semi-Finalist then, so I decided to reapply as I was starting my master’s program, and as I  started teaching and solidified where I saw myself and my goals,” Krutz said.

Krutz has divided her time at UCM by working in the English Language Institute and the Study Abroad office. There, she has found a group of supportive colleagues who have mentored and supported her efforts to pursue her passion for studying abroad, which has flourished at UCM.

"It has been a pleasure working with Stephanie in the MSE in ELL TESL program.  She is a bright and diligent student that genuinely wants to make her students' lives better and is invested in learning from them as much as she is in teaching them," said Christina Kitson, Ph.D., associate professor and TESL coordinator in UCM's Department of English and Philosophy. "I have had the wonderful experience of watching Stephanie apply concepts to real-life situations and make realizations that helped her understand her own learning in the past.  Stephanie has a lot of goals and ambition and is looking forward to her Fulbright experience and working on her Capstone project while in her Fulbright placement.  This will be a wonderful opportunity for her to put her TESL coursework into immediate and practical application."

She said she was drawn to the university as a student at Barstow High School in Kansas City when she attended a foreign language film festival on campus at the same time she was learning to speak Spanish. Considering what her initial career plans were, attending UCM proved to be a life-changing choice.

“Later, when I was doing college tours as a senior, I originally planned to enroll in the Professional Pilot program starting here at UCM. Then, about two weeks before the start of my freshman year in the fall, I had a huge eureka moment. I realized I want to travel, and if I do this, I won’t have much time to do so. In order to study abroad, I switched to an International Studies major,"  she said.

While her high school and university experiences have already made it possible for Krutz to travel to places such as Japan, Israel, Jordan, and Spain,  she plans to spend her summer participating in the “Divided Cities Tour” led by Michael Makara, Ph.D., an associate professor of political science and chair of the eight-member Fulbright Committee. This will take her from Kansas City to Germany to visit Berlin, then to Israel to visit Jerusalem.

Krutz spoke about the challenges that are entailed in applying for acceptance into the Fulbright Program. She said that in addition to completing an application, she also submitted a one-page Statement of Grant Purpose, and a Personal Statement.  Realizing the tough competition she faced, and taking to heart the experience she gained from her first application process, she worked from May to October 2021 developing these statements, taking advantage of faculty members’ willingness to help her perfect these written materials.

“It was definitely an exercise in dedication and motivation,” she said in describing the process that landed her a Fulbright award, which will make travel abroad possible without a huge financial sacrifice.

According to Makara, the program covers “pretty much everything you need to live abroad for a year. That includes airfaire to get to your country, start-up money to get you going, and a monthly stipend to help with living experiences.”

Krutz said she is still waiting to learn where she will be placed once she arrives in Uruguay – whether she will be working with school children, at a university level, or a program with adult learners to help them with their English language skills. Part of her stay will include developing a curriculum project to help facilitate cultural understanding of the United States. While doing so, she is excited about her host country, which she described as a “hidden gem” not well known by many people outside that area of the world.

”It’s a small country, and a very beautiful country, and I like the values the people hold – just  the attitude toward the immigrant populations particularly are something near and dear to my heart,” said Krutz, whose father immigrated to the United States from Saint Petersburg, Russia.

Krutz said she still has a lot of questions that she hopes to answer before traveling abroad. While she waites, she is happily soaking in the recent news about her selection.

“It still really hasn’t hit me yet - the experience of being a Fulbrighter and what it is going to do for my life, and exactly what it will bring to my professional and personal experience,” she said.

As a former Fulbright Award recipient, Makara said the program is life-altering for those who get to experience it. Individuals who want to learn more are encouraged to contact him at makara@ucmo.edu. They are also welcome to contact other Fulbright Committee members: Kristy Boney, Modern Languages: Darlene Budd, International Studies; Matt Chiesi, Center for Global Education: Nicole Freeman, Communication: Tom Goldstein, History; Melissa Petkovsek, Criminal Justice; and Julie Stephens-DeJonge, Modern Languages; or check out the Fulbright Program website at us.fulbrightonline.org.