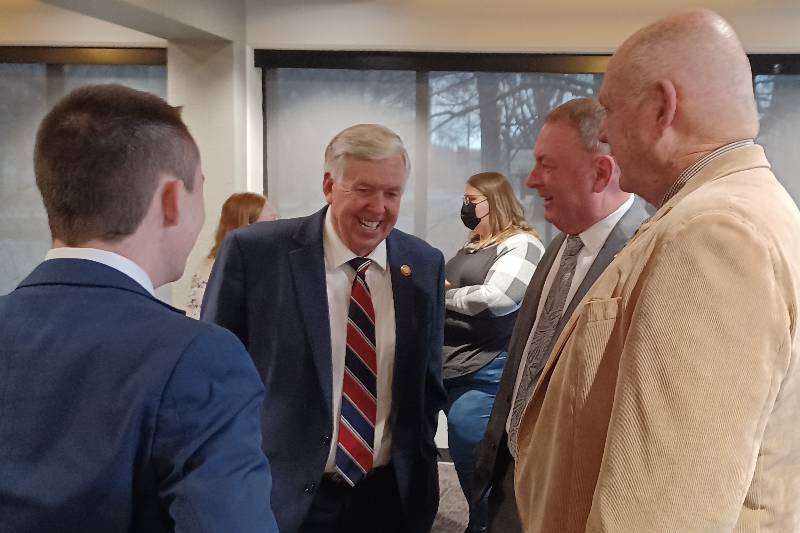 Missouri Gov. Mike Parson, second from left, chats with members of the University of Central Missouri's Board of Governors, from left, Zac Racy (former student board member), Ken Weymuth and Dr. Gus Wetzel II during a previous stop at the university.

WARRENSBURG, MO – In his State of the State address presented from the Missouri House Chamber in Jefferson City today, Gov. Mike Parson announced his proposal for a balanced fiscal year 2024 budget that includes a 7 percent increase in core funding for the state’s public colleges and universities.

The proposed FY 2024 budget, which has a heavy emphasis on the state’s infrastructure, must now travel through the legislative process for consideration by the House and Senate. The governor’s plan for higher education represents a $4.1 million increase in core funding over FY 2023. It also includes $38 million in additional funding for MoExcels projects, and  $275 million in support for capital projects at Missouri’s colleges and universities. This includes funding that benefits the University of Central Missouri’s renovation of the Humphreys Building.

“We are exceptionally grateful for Governor Parson's long-standing support for higher education and the University of Central Missouri,” said UCM President Roger Best. “His proposed core and capital appropriations are vital in the current inflationary environment and for our continued efforts to modernize our facilities.”

He added, “The governor's fiscal year 2024 budget recommendations are an important first step in the legislative process, and we appreciate his desire to ensure UCM and all of Missouri's public higher education institutions continue to lead from a position of strength.”

Gov. Parson met with higher education leaders in mid-December to discuss his proposed plan to increase core funding. If approved, this would be the largest state appropriation for public higher education during Parson’s tenure as Missouri’s 57th governor. He has served the office since 2018, after previous service in the Senate.

“From the time Mike Parson served in the state Senate, he has supported higher education in Missouri,” said David Pearce, a former Missouri legislator who serves as UCM’s executive director for governmental relations. “His proposed higher education budget is a big win for Missouri students and their families. We look forward to working with the legislature as the budget works through the legislative process.”

The Missouri legislature has until May 5 to adopt the final budget. It becomes effective July 1.