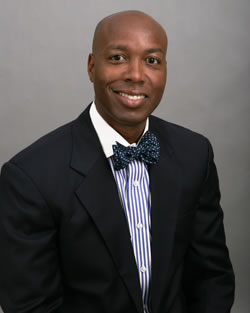 WARRENSBURG, MO – An education leader with vast experience in student engagement and success, Kevin Rome, president of Lincoln University, will be the keynote speaker for the first faculty and staff Learning Day at the University of Central Missouri Friday, Jan. 8. More than 640 people are registered for the luncheon and keynote address, which will take place from 11:45 a.m. to 1 p.m. in the Multipurpose Building.

Learning Day is a professional development program for all faculty and staff members, which will cover a wide variety of different topics that relate to how each employee can contribute to student success, including their role in providing a safe and inclusive university community. During the luncheon, which is part of the day-long, program Rome will share insights about working for a historically African American university in Jefferson City, Mo., and apply his knowledge to assist UCM with its university-wide commitment to a campus community that values diversity, service and safety among all faculty, staff and students.

Rome became the 19th president of Lincoln University in 2013, part of a journey into higher education that began at Georgia Southwestern College in Americus, Ga., as an Upward Bound Residence Hall supervisor in the summer of 1989. While he was pursuing a master’s degree in education, he served from 1989-1991 as a residence director, Greek advisor and financial aid counselor at the University of Georgia Athens. He then joined California Polytechnic State University in San Luis Obispo in 1991 as coordinator of student development, and in 1992 was promoted to the position of academic development specialist, where he was responsible for developing and supervising the First-Year Experience, Multicultural, Living Learning, Returning/Transfer and Faculty Fellows programs. In 1994, he was promoted to the position of education and training specialist at Cal Poly, and served at that post for two years.

Rome’s multi-faceted career in higher education also includes serving as assistant dean of students in the area of new student services at the University of Texas at Austin, beginning in 1996, followed by a promotion in 1999 to assistant dean of students in the area of campus and community involvement at UT. While also earning his doctorate at UT, Rome’s many professional responsibilities during his tenure included supervising a welcome program for African American, Mexican American and Hispanic students and special programs and services for nontraditional/adult students, and supervising the Student Organization Center and Student Organization Bank.

After leaving UT, he served for three years as assistant vice chancellor at Indiana University-Purdue University Indianapolis in Indianapolis, Ind., where he was responsible for the university’s diversity and retention initiatives, and was on the development team for a $50 million new campus center. He became vice president of campus life at Clayton State University in Morrow, Ga., in 2004, and in 2005 returned to Morehouse College in Atlanta, Ga., where he previously earned a bachelor’s degree, to become vice president for student services. In 2008, he became vice chancellor for student affairs and enrollment management at North Carolina Central University, Durham, N.C.

Rome’s vast service beyond his role as a university president includes membership on Board of Directors for the Jefferson City Chamber of Commerce, United Way of Central Missouri, Capital Region Medical Center, Central Bank, and the Jefferson City Area YMCA, and board member for the Missouri Campus Compact. He has held leadership roles in other organizations dedicated to access, diversity and excellence in education.

All individuals planning to attend Learning Day activities are required to have pre-registered. To view the schedule of events and all locations, visit ucmo.edu/calendar.