Long Reappointed to Governing Board for One Year 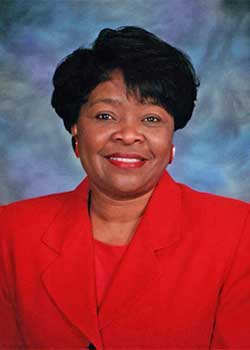 WARRENSBURG, MO – The Office of Missouri Gov. Jay Nixon this week announced the reappointment of Mary Long, Kansas City, to the University of Central Missouri Board of Governors. Pending confirmation of the appointment by the Missouri Senate, Long will serve on the board through Jan. 1, 2017.

Long’s reappointment to UCM’s highest policy-making body was one of three appointments Gov. Nixon made to governing boards at public universities across the state. Other individuals were appointed to Boards of Governors at Missouri Southern State University in Joplin and at Truman State University in Kirksville.

Long was initially appointed to the UCM Board of Governors in October 2008 to complete the term of a board member from Kansas City, Michelle Wimes, who had resigned. Although Long’s term ended Jan. 1, 2011, she has continued to serve since that time.

During her tenure as a board member, she has been part of many decision processes that helped advance the university with a focus on student success. Such actions include holding tuition to an average 1.48 percent increase over a six-year period, well below the consumer price index; authorizing construction of The Crossing – South at Holden, a 325-bed retail and student residential complex which opened for the fall 2015 semester; the establishment of the Missouri Innovation Campus in Lee’s Summit, launched in summer 2012; construction of the Student Recreation and Wellness Center, which opened in 2011; and upcoming renovation of the Wilson C. Morris Science Building. While Long has served on the board, the university also experienced a five -year string of record-setting enrollments, and has implemented measures designed to help students graduate on time.

After beginning her career in education in 1968 as a teacher, coordinator and director, Long became dean of instruction and student services for the Metropolitan Community Colleges in 1983. She served at that post until 1986 when she became an assistant principal and then principal for the Kansas City Missouri School District’s Kansas City Technical Education Center. In 1997, she became a principal in the school district at Van Horn High School.

Throughout Long’s professional career, she has received recognition for her work in education and involvement in civic and public service activities. This includes the National Association of Counties Training Award, the Chancellor’s Commendation for Assessment of Business and Industry Needs, recognition from past U.S. President Jimmy Carter and Millard Fuller for Sigma Gamma Rho Sorority, Inc.’s Habitat for Humanity home build in eight states, and recognition for her participation in The Children’s Defense Fund community crusade self-help organization for children.

Long served as past board member for the YWCA, United Way, Women’s Chamber, and NAACP. Her professional affiliations include, several community organizations, which includes Societas Docta, Inc. Board of Directors, a national networking and mentoring organization for diverse women, working toward their doctoral degree.