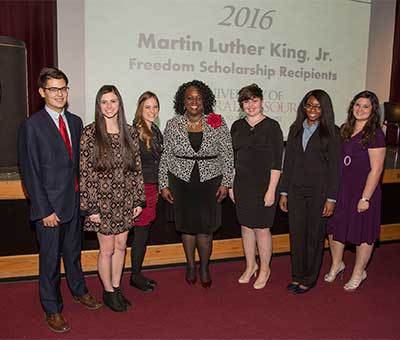 WARRENSBURG, MO – Cynthia Johnson brought her message home Tuesday evening as the keynote speaker for the annual Dr. Martin Luther King, Jr. Freedom Scholarship Dinner in the Elliott Union ballroom. The event is the highlight of the university’s annual celebration of the legacy of Dr. King.

Johnson, a Warrensburg native and UCM alumna, shared with an audience of nearly 300 the story of her own challenges as she make the transition from a minority child with a stutter to a veteran educator, administrator, consultant and lecturer with a doctoral degree. Using music, photographs and a dramatic reading, she interwove her story with the stories of Dr. King, the desegregation of the Little Rock schools, the arrest of Rosa Parks, and the social changes over the past decades.

Johnson began with a monologue presentation from the play In White America by Martin Duberman, the intense first-person account of a young black woman’s first day at the desegretated Central High School in Little Rock. Johnson then detailed how her own parents, the late Jerome and Shirley Johnson, were not allowed to attend high school in Warrensburg, but instead were bussed to the all-black Hubbard High School in Sedalia.

She detailed her own education in Warrensburg, where her severe stuttering often labeled her as unable to succeed in school. However, she noted that “equality and education mattered to my family.

“In kindergarten, I began to hear for the first time what I couldn’t do,” she said. “I was even told I’d never make it through school.” However, she credits her parents and her grandparents, the late Robert and Beatrice Collins, with teaching her that she could succeed with hard work, determination, hope and faith.

“Poverty does not mean the inability to succeed—it means a family doesn’t have money,” she said, noting that her family at one point was unable to pay for utilities. “We were poor, but my family gave me hope, and I had a dream. I wanted to go somewhere and give back to someone else.”

For Johnson, a turning point in her education was when junior high speech teacher Ken Bell handed her a monologue he had chosen for her to perform.

“I told him I couldn’t,” she said, “but he believed I could, and I did. He took a little girl who couldn’t speak so anyone could understand her, and he believed in me.” She then shared that the monologue Bell gave her to perform as a seventh grade students was the same selection she had used to open the program that evening.

Johnson graduated from Warrensburg High and received her bachelor’s and master’s degrees in education from UCM. She earned her doctoral degree from Baker University in 2003. Johnson outlined many of the highlights of her journey, including the opportunity to meet the original Little Rock Nine, the first nine black students to attend Central High School in Little Rock in 1958.

Johnson noted that her mother, a lifelong resident of Warrensburg had attended every Freedom Scholarship Dinner from the first in 1994 until her death in 2013.

“My mother always said, ‘Maybe someday they’ll ask you to come and speak at that dinner,’ “ Johnson said. “I told her that probably wouldn’t happen, but here I stand, three years to the day after her passing, speaking to you now.”

Quoting Dr. King’s dream that there would one day be a world where his children would not be judged by the color of their skin, Johnson left the audience with two principles, challenging the audience to continue their efforts to educate every child in their care, “building a bridge from despair to hope.”

“First, train a child up to the way he should go, and he will not depart from it when he is older,” she said, “and second, it is easier to build strong children than repair a broken man,” she said, quoting Fredrick Douglass. “Poverty is not an excuse to educate children ineffectively. My experiences here in Warrensburg equipped me to deal with people in every walk of life. Warrensburg, be sure that all children have opportunity.”