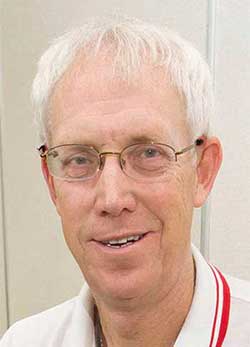 WARRENSBURG, MO – A University of Central Missouri professor who has been involved in a 20-year-long continuous research project with a global network of individuals using computer processors, has discovered the world’s largest known prime number. It was found on a computer at UCM - Lee’s Summit.

The new number, identified by researchers in the Great Internet Mersenne Prime Search (GIMPS) as 2^74207281 – 1 or M74207281, has more than 22.3 million digits, almost 5 million digits larger than the previous record Mersenne prime claimed by the same UCM research effort led by Curtis Cooper, professor of computer science, in 2013.

As GIMPS participants, Cooper and faculty member Steven Boone, professor of chemistry, announced their first record prime in 2005, followed by a second discovery in 2006. The University of California-Los Angeles announced the next discovery in 2008, but UCM has claimed the largest number twice since then, giving UCM a total of four record Mersenne prime discoveries.

A prime number is a positive integer greater than one which can only be evenly divided by itself and the number one. The Great Internet Mersenne Prime Search was formed in January 1996 by George Woltman who developed GIMPS’ Prime95 software to find new world record size Mersenne primes, a special class of prime numbers named for French monk Marin Mersenne, who studied them 350 years ago.

The new prime number - which is 74,207,281 twos multiplied together, minus 1 - is only the 49th known Mersenne prime ever identified, each one increasingly more difficult to find, according to GIMPS. This number was actually reported by a UCM computer to the GIMPS database on Sept. 17, 2015. It went unnoticed, however, until Jan. 7, 2016, after some routine data-mining by Aaron Blosser, the GIMPS system administrator. GIMPS then double-, triple-, and quadruple-checked the number on different hardware and software to verify the result before announcing the find, Cooper said.

The discovery makes UCM eligible for a $3,000 GIMPS research discovery award. As an organization, GIMPS’ major goal is to win $150,000 award administered by the Electronic Frontier Foundation to those who are the first to find a 100 million digit Mersenne prime number.

Asked about what the latest find means to Cooper, he said modestly, “I think it means I am very lucky. And, I am privileged to be a part of in the Great Internet Mersenne Prime Search and to have UCM's support that has allowed me to run the GIMPS software on computers in labs across campus.”

Although the discovery of 2^74207281 - 1 as the current largest known prime number has no known application, he noted that there are some side benefits to the search process.

“It shows that distributed computing projects, like GIMPS, can network computers and work toward a common goal. It also helps improve the architecture and hardware of modern computers since the running of the GIMPS software on a computer provides a good stress test for a computer's hardware, and the GIMPS software has recently detected a flaw in Intel's latest Skylake CPUs,” he said. “Finally, the data collected by GIMPS can be used by number theorists to better understand Mersenne primes and prime numbers in general.”

Cooper credits the support from UCM he receives for the GIMPS project for making his recent discovery possible.

“First of all, I am indebted to UCM's Office of Technology for all of their support over the years, which has greatly contributed to the discovery of this Mersenne prime and for all the other Mersenne primes we have found on campus. In particular, I am grateful to Jeff Greene for helping me set-up the server that manages the GIMPS project at UCM and for all of the technical support people, especially the ones who manage computer labs at UCM. They have put my Mersenne user as an administrator on many of the lab computers across campus, both in Warrensburg and in Lee's Summit. In fact, the computer that discovered M74207281 is prime was Computer Number 5 in Room 143 at the University of Central Missouri - Lee's Summit.”

Cooper doesn’t plan to discontinue his research into Mersenne primes anytime in the near future. As he noted, “I will continue to participate in the GIMPS project. I really enjoy the mathematics related to prime numbers and Mersenne primes and I also enjoy the use of computers to find new primes. My wife jokes, but is halfway serious, saying I can't retire from UCM because then I won't be able to use UCM's computers to search for Mersenne primes.”