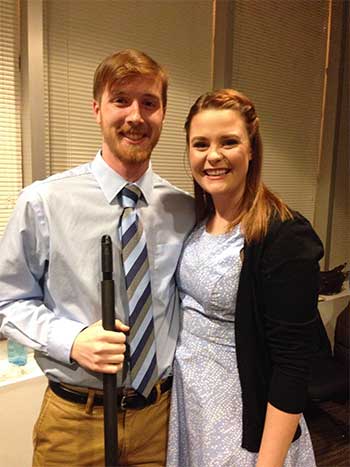 PHOTO: UCM theatre students Daniel Parman and Nellie Maple are headed for the Kennedy Center College Theatre Festival in Washington, D.C., following their success at the regional competition in Minneapolis.

Five UCM theatre faculty members and 28 theatre students were among the more than 1,500 faculty and students from 80 universities in Missouri, Kansas, Nebraska, Iowa, North Dakota, South Dakota, and Minnesota attending the festival. The festival presents performances and scenes from invited productions from the top shows in the region and hosts acting, directing, design, playwriting, stage management, dramatic criticism and dramaturgy competitions.

Nellie Maple won the Best Musical Acting Award while simultaneously winning first place overall in the final round of the Irene Ryan Scholarship Auditions. She and her partner, Daniel Parman, will receive an all-expense-paid trip to the Kennedy Center in Washington, D.C., in April for the National Festival, where they will compete against seven other regional winners for different scholarship awards and recognitions, as well as partake of several different acting workshops throughout the week.

The preliminary rounds of the Irene Ryan Scholarship Auditions included 335 students from around the region. This was pared down to 64 students. including UCM students Nellie Maple, Dane Schnake and Bryson Kenworthy, who advanced to the semi-final round. Bryson, along with his partner, Stephanie Laaker, also advanced to the final round of sixteen competitors.

Kacy Barta and Samantha Rudy had their Society of Stage Directors and Choreographers directing scenes of "On The Verge" and "Clarkston" advance to the final round. Kacy’s cast featured Nellie Maple, Brooke Myers and Kelsey Reinsfelder. Samantha’s cast included Jessica Baxter, Zachary Craft and Dane Schnake. Out of 16 competing directors from across the region, Kacy Barta and her cast placed second overall.

During the week-long festival, more than 100 students auditioned for the Musical Theatre Intensive, which showcased 20 of the region’s best voices. Among those selected to perform at the Friday morning showcase were UCM musical theatre majors Kelsey Reinsfelder and Brooke Myers.

Ty Young was the winner of the Regional Technical Projects award for his technical direction of "Vanyaand Sonia and Masha and Spike." Carter Higgs was the first runner up for his Regional Scenic Design of "Assassins."

Sarah Clifton was the second runner up for National Allied Crafts recognition for puppets she created for a one-act production of "Punch And Judy."