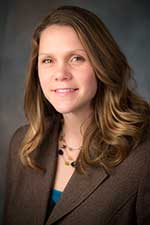 Her appointment was announced by Mike Godard, vice provost for enrollment management at UCM. Goos, who earned a Master of Science in Exercise Science: Athletic Administration degree from Central Missouri in 2001, will have responsibilities that include managing, developing, implementing and assessing a comprehensive retention action plan for the university. She will work in collaboration with university colleges and divisions to compile current UCM retention strategies, track retention activities, assess efficacy, and recommend changes, among a wide variety of other duties in the retention area, Godard said.

He noted, “We are very pleased that Dr. Goos has accepted this new position at UCM. Her enthusiasm and demonstrated ability to effect positive change regarding student success will be great assets in our work to increase the retention, completion and career readiness of our students at UCM."

The enrollment management area is among campus units that report to UCM Provost-Chief Learning Officer Deborah Curtis. She added that the university is delighted to welcome Dr. Goos to UCM to serve in this important role.

“Her experience serving in prior educational leadership positions will provide us with additional resources to advance our progress toward achieving our student success goals.  We are looking forward to the many contributions we know she will make to this united effort,” Curtis said.

A resident of Blue Springs with more than 15 years of professional experience in higher education, Goos currently serves as dean of student development and enrollment at MCC - Longview. In this capacity, she provides leadership and management in areas such as financial aid, academic advising, records, business, testing, admissions, counseling, athletics, campus life, career services, disability support services, as well as the Student Success Center, which she created.

Goos has served at her current post since 2012, and her achievements have included increasing high school enrollment rates with partnerships and mobile enrollment strategies, redesigning academic advising opportunities for first time freshmen and specific at-risk cohorts, providing leadership for the creation of a peer mentoring program and academic probationary program, and creating opportunities to increase tutoring on campus and academic engagement.

Her work at MCC also has included a special assignment July 2014-August 2015 as associate vice chancellor of student development and enrollment management, where her duties included improving key performance indicators in recruitment and retention to include completion of a robust communication plan, creation of caseload advising and early alert systems.

She has served in many other capacities at MCC campuses, including service at MCC-Blue River as associate dean of student development and enrollment management, August 2010-October 2012; registrar, May 2009-August 2010; enrollment services manager at MCC-Kansas City, April 2008-May 2009; and college relations coordinator at MCC-Maple Woods, Feb. 2005-April 2008. Before working in the Kansas City metropolitan area, Goos served as a track and field/cross country coach at the University of Tulsa in Oklahoma from August 2002-August 2004, and worked at the University of Nebraska, Kearney, as an assistant track and field coach, July 2001-August 2002, and as an adjunct instructor in that university’s Health, Physical Education, Recreation and Leisure Studies Department, August 2001-August 2002.

In addition to her UCM degree, Goos earned a Bachelor of Arts in Elementary and Middle School Education degree at Doane College, Crete, Neb., and a Doctorate in Education, Educational Leadership and Policy Analysis from the University of Missouri-Columbia.