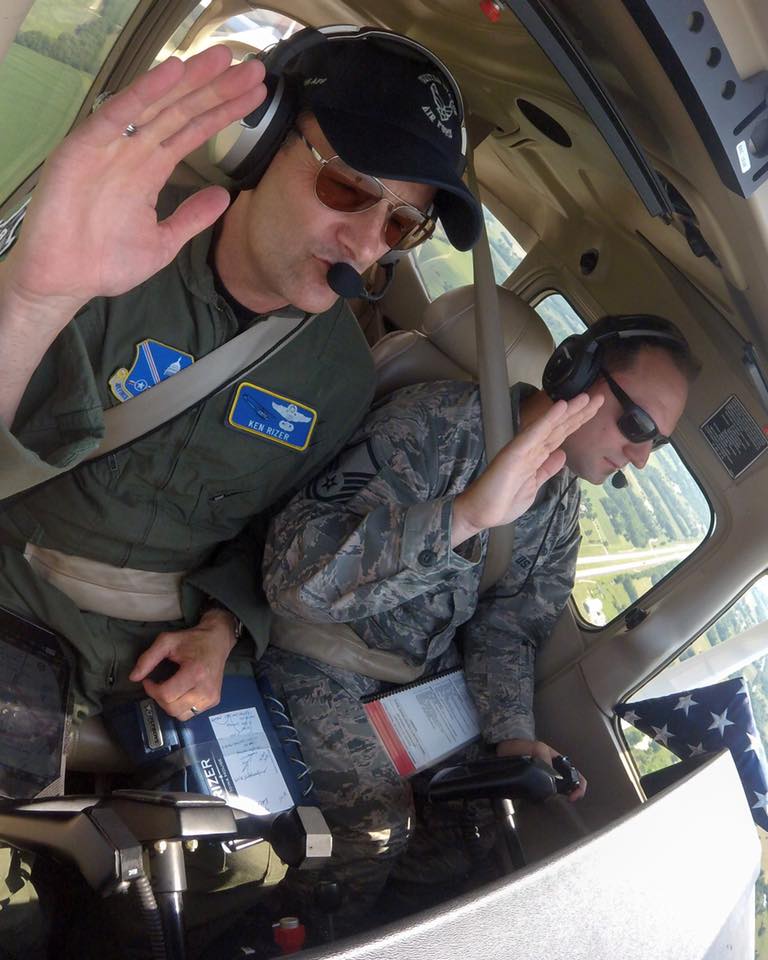 PHOTO: After taking off in a Cessna 172 from the University of Central Missouri’s Skyhaven Airport and while passing over the Whiteman Air Force Base runway, Master Sgt. Rob Martin recites the U.S. Air Force reenlistment oath as administered by longtime Air Force fighter pilot Col. (Ret.) Ken Rizer. This was the second time Martin took the oath in the reenlistment oath air in Rizer’s presence, but the first time Martin was piloting the airplane. Photo courtesy of 442nd Fighter Wing/Public Affairs.

WARRENSBURG, MO – While benefiting from the education he receives as a student in the University of Central Missouri’s professional pilot program, Master Sgt. Rob Martin recently repeated a rare experience that previously landed him recognition in U.S. Air Force Times while also honoring the longtime friendship and professional relationship he has with one of his military mentors.

Martin joined the Air Force in November 2001 as a fighter aircraft crew chief, where he served as a tactical aircraft maintainer. When he decided to reenlist in 2008, his commanding officer, Col Ken Rizer, added a special twist to the swearing in ceremony by suggesting he take his reenlistment oath in the same F-16 fighter jet that Martin had carefully maintained. With the thrust of a jet engine pushing them at great speeds, Rizer administered the Air Force reenlistment oath while piloting the aircraft near a U.S, .military base, just below the demilitarized zone in South Korea.

Now, with slightly more than 16 years of military experience, Martin decided to enlist once again, and again ceremonially in the air. This time, however, he may not have been traveling at the same speed, but was able to show Rizer he had the right stuff when it comes to flying as he took control of the single-engine university-owned Cessna 172. Shortly after the airplane took off from Skyhaven Airport, and was 900 feet above the Whiteman runway, Rizer administered the oath that Martin will follow for the next four years while serving his country - to uphold the constitution of the United States.

“It’s a great honor to be asked to reenlist Master Sgt. Martin,” said Rizer who made the nearly four-hour trek to Skyhaven from Des Moines, Iowa. “There’s a certain poetry to it because he was my dedicated crew chief when I was an operations commander in Korea and he did a phenomenal job taking care of our airplane. It was the most beautiful airplane on the line.”

Rizer is now flying jets for a private company after retiring from his career in the Air Force, which included serving as wing commander at Andrews Air Force Base, and followed with time spent in the Iowa state legislature. He said he had no doubt that Martin could succeed as a pilot, also recalling qualities such as an attention to detail, and the discipline and pride he showed as military professional.

“It’s fun for me to see how he’s gone from being a crew chief to a leader in the Air Force. Now he’s in this sort of transition period in his life and he’s wanting to be an aviator which warms my heart. As a lifelong aviator, I think that’s pretty cool,” Rizer said.

Martin hopes to complete his pilot training at UCM, and has a long-range goal to serve as a pilot for a regional airline or work as a corporate pilot after he completes his military service. In the short run, he wants to become certified to serve as a flight instructor, and pursue a master’s degree in safety, which is consistent with the work he is doing at Whiteman as part of the 442nd Fighter Wing. He praised the assistance he has received from the flight instructors at Skyhaven and the staff at UCM’s Military and Veterans Success Center, who have helped him maximize his military benefits and guided him through the higher education process on campus.

“Hopefully, one day I will be able to instruct a couple of classes out here just to pay the school back for what they have given me,” “I’m a man of gratitude. I think that if someone does something for you, you do something for them. I think that’s how we keep the younger generation inspired in general aviation – just keep teaching and putting it out there.”

Martin noted that the reenlisted experience that took place June 13 was mostly about the opportunity to re-unite with his longtime mentor and friend, with whom he has stayed in touch for the past 10-12 years.