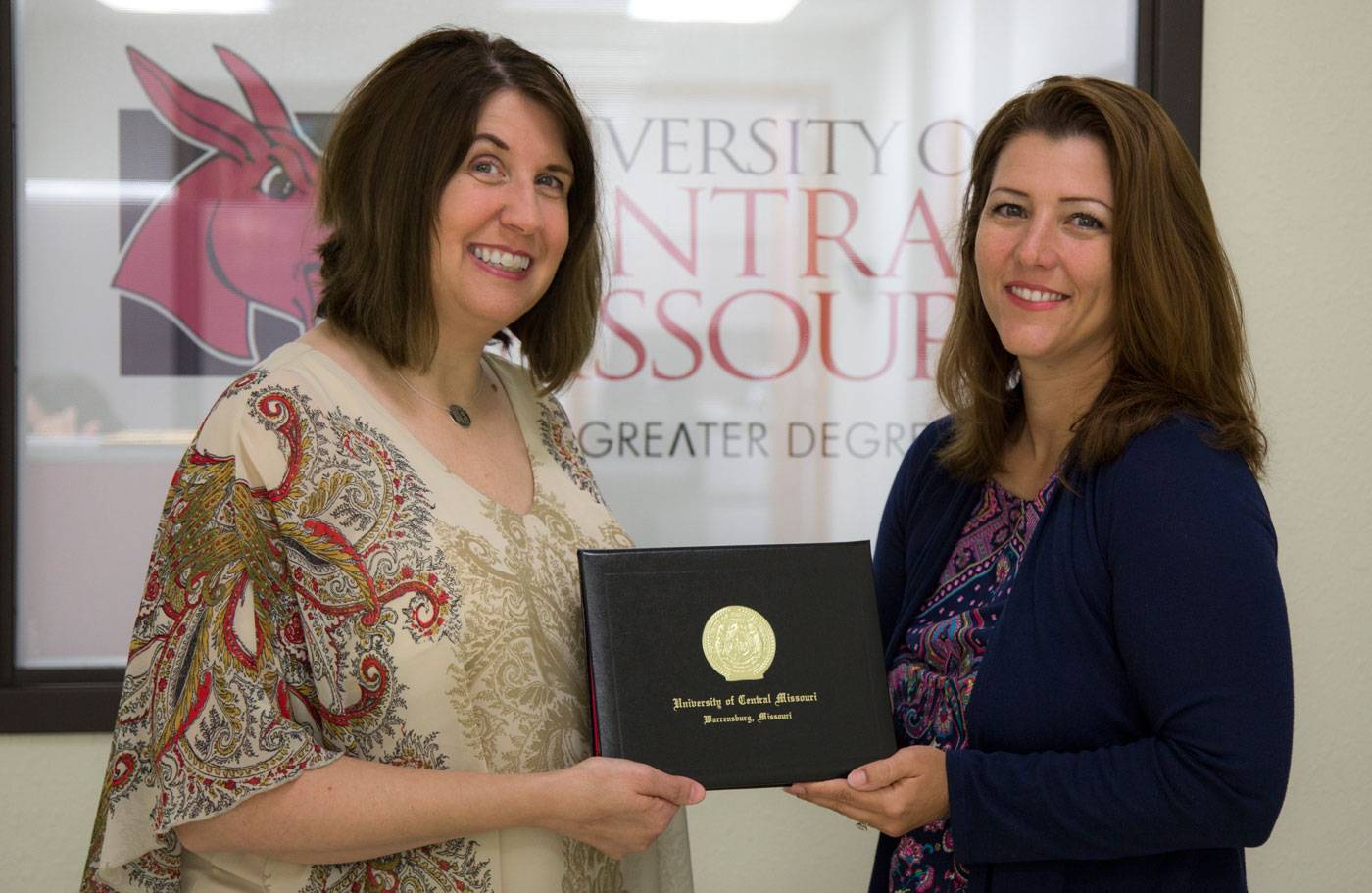 Sarah Chamberlin, left, senior designer and brand specialist in the University of Central Missouri Office of University Relations, is presented the 2018 Foster/Inglish Award for Outstanding Achievement and Service in Public Relations by Kelly Waldram Cramer, director of marketing and promotions overseeing University Relations.

WARRENSBURG, MO – Whether she is handling publication and web design or sharing  her ideas about strategic and artistic direction, Sarah Chamberlin’s contributions to the University of Central Missouri have widespread impact on the institution’s reputation and graphic identity. Her diligence and commitment to high-quality work have contributed to her selection as the 2018 recipient of the highest honor given annually to a member of the University Relations staff.

Chamberlin is the 16th person to receive the Foster/Inglish Award for Outstanding Achievement and Service in Public Relations. The Foster/Inglish Award is named for two individuals who pioneered institutional public relations at UCM. The award was established in 2000 to honor achievement and service by members of the university’s public relations staff, which today also is integrated with marketing and promotions. John Inglish, director emeritus of public relations, established an endowment for the award through the UCM Alumni Foundation the year he retired to honor his longtime friend and mentor Carl Foster, who retired as director emeritus of public relations in 1986 after 19 years of service to UCM. Inglish devoted 27 years to the university’s public relations efforts before he retired.

The award was announced recently by Kelly Waldram Cramer, who serves as director of marketing and promotions overseeing University Relations. She said Chamberlin exemplifies the type of individual for whom the Foster-Inglish Award is intended, adding that during her eight years of service, she has been a highly valued member of the University Relations staff.

“Sarah is genuine, smart, collaborative, and has a tremendous work ethic,” Waldram Cramer said. “When we have challenging situations, she always volunteers ideas and rolls up her sleeves and helps, even when it is outside of her job role.”

She also noted that as a UCM alumna, “Sarah cares deeply about the university and is aware of her ability to change the UCM experience one deed at a time. She truly exemplifies service to UCM, University Relations and students.”

Chamberlin has more than 20 years experience in the marketing communications industry, having worked for clients in private and public sectors at the local, regional and national levels while employed with nationally known advertising and marketing agencies in the Kansas City area. She came to UCM in 2010 and currently serves as senior designer and brand specialist in University Relations in which she designs print and web collateral for a variety of areas on campus. Her work in print and online is highly visible by university stakeholders that include students and their parents, faculty and staff, alumni, legislators and more.

“I am greatly appreciative of receiving the Foster-Inglish Award. I cannot imagine working or partaking in a better community than that of the University of Central Missouri. I consider my job to be a privilege – one that allows me and others alike the opportunity to provide service through leadership and good stewardship,” Chamberlin said. She added that working at the university gives her an opportunity to be among those who are “setting an example for each generation that commences forth into this world.”

Waldram Cramer commended Chamberlin for her contributions in helping the university to launch a new website that will better serve the needs of campus constituents. She has aided in many presidential-level projects, overseen projects related to major branding efforts, and has been instrumental in key admissions pieces needed in the recruitment of students.
Chamberlin has a passion for working with national and regional not-for-profit organizations. Throughout her tenure at UCM, she has stayed current in her profession by getting involved in organizations such as the Professional American Association of University Women and the University and College Designers Association.

Chamberlin has a Master of Arts in Communication degree and a Graduate Certificate in Women's and Gender Studies from UCM. She also received a Bachelor of Fine Arts in Studio Art degree from UCM (then known as Central Missouri State University) in 1997.