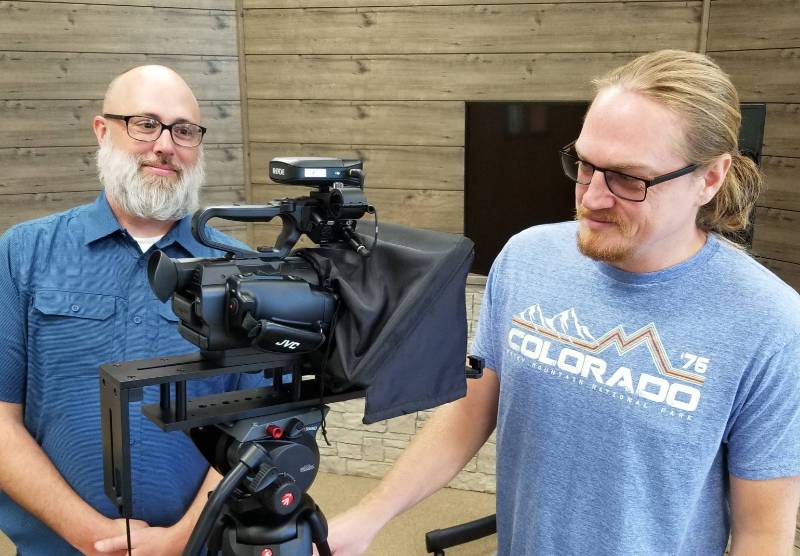 Matt Bird-Meyer, left, faculty advisor and assistant professor of digital medial production, and Chris Holmberg, managing editor of the Muleskinner student newspaper, check out a new digital video camera with teleprompter that is part of the new newsroom studio made possible by a University of Central Missouri Foundation Opportunity Grant.

WARRENSBURG, MO – University of Central Missouri students have a unique opportunity to work in a fully modernized newsroom following the installation of a new broadcast studio, a return to print editions of the Muleskinner student newspaper beginning Aug. 16, and a custom-built website that converges the Digital Media Production program’s three media channels in news, streaming radio and television programming.

Matt Bird-Meyer, faculty advisor and assistant professor of digital media production, said these initiatives are part of an ongoing plan to build a robust media presence at UCM in order to support opportunities for students to develop skills they will need in the professional world of media. This is not only consistent with the university’s goal to create a campus atmosphere that focuses on learning to a greater degree, but also fulfills a valuable communication need for the UCM community and beyond.

Prior to the fall 2017 semester, a decision was made at the academic department level to create a future- focused strategy that integrates media-related curriculum and lab experiences for students that are needed at a time of tremendous transition and change in the field of print journalism. While the print version of the Muleskinner was temporarily put on hold during the 2017-2018 academic year, students and faculty in the Digital Media Production program used digital technology to develop a stronger online communication experience.

“We redesigned the whole website over the previous summer and that rolled out in September during Get the Red Out,” Bird-Meyer said. He added that this site gives individuals access to Central TV (CTV) for student- produced television programs and UCM Radio – the Beat for online streaming radio content. The site also provides a link to the Muleskinner’s digitally published flip-type newspaper.

“What we did was to incorporate CTV, The Beat and the Muleskinner into a single landing page at digitalburg.com. Each one of these has its own extension. So if you go to CTV, you get their YouTube page; if you go to The Beat you go to the radio station, and if you click on the ‘M’ or any of the headlines it takes you to the Muleskinner,” Bird-Meyer said.

“We really wanted to improve the collaborative spirit of Digital Media Production by putting everybody into a single portal. We didn’t have the print newspaper, but we had a bi-weekly online issue of the Muleskinner,” he said.

Under the new plan created in cooperation with a steering committee of UCM faculty, students and media professionals, the Muleskinner will continue to publish online bi-weekly issues, but a print edition will come out three times per semester during the 2018-2019 academic year. With the start of the spring semester only days away, new Muleskinner Managing Editor Chris Homberg said students have a daunting task ahead of them to produce the first publication of the year by Aug. 16.

“It will be a little bit of a baptism by fire for us, but I think it is pretty exciting,” Holmberg said. “We have a lot of people (students) who are in new positions, and I am one of them. So it will be a test right out of the gate, but that will set the tone for this semester and the academic year.”

Adding to student learning experiences is the creation of a new broadcast studio in The Muleskinner office, located on the third floor of the Wood Building. Two faculty members in the Digital Broadcast Production program, Darin Plummer and Scott Hofsommer, built and installed a studio backdrop in the newsroom. Plummer also researched and acquired a digital camera with teleprompter, LED lighting, microphones and a high-definition video monitor that can interface with office computers. All of this was made possible by a $4,999 UCM Alumni Foundation Opportunity Grant, which was written by faculty members Carol Atkinson, Joe Moore, Bird-Meyer, and Plummer.

By adding the studio, student journalists now have an opportunity to produce videos and conduct interviews that will enrich the digital version of the Muleskinner. New programs and segments also could be incorporated into or help promote CTV and The Beat programming. The digital monitor also can double as a learning tool for making presentations to students, including displaying Google analytics to measure how their stories and online content is performing. This has become very important in the professional media world, and is critical in making key business decisions.

Both Holmberg and Bird-Meyer look to traditional newspapers for examples of what they are doing to adapt to the needs of today’s media consumers. They believe they and their students can learn from their experiences. “A lot our energy is going to be put into producing something the campus can be proud of but at the end of the day, willing to fund,” Holmberg said. “In any budget, no matter the landscape and circumstances, you have to be able to justify spending money. At the end of the year, I want to be able to give them something we’ve been doing and say this is vital, and worth every penny.”

The next step in the evolution of this student-led media effort will be the creation of a smart phone app that allows individuals to access student-run media. Bird-Meyer said he hopes to engage students in the computer information systems program in assisting with this effort during this academic year.