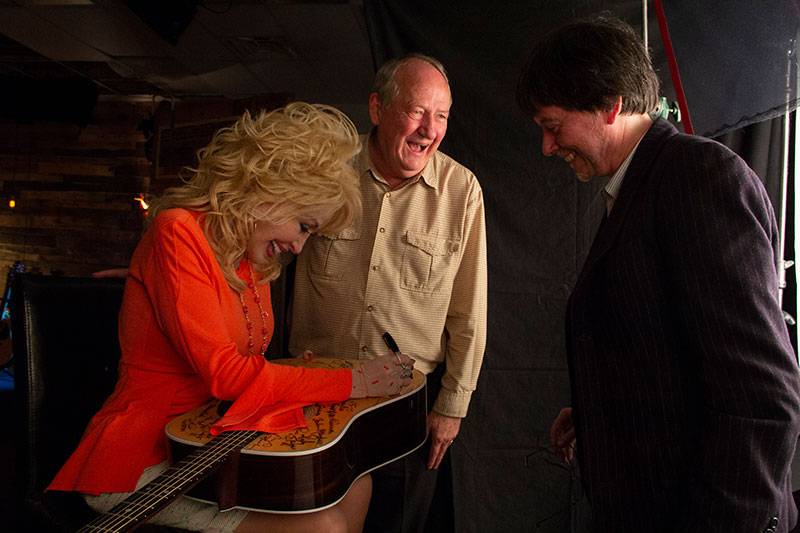 Dolly Parton is one of the many artists interviewed for the series who signed this Martin D-28 guitar. Credit: Katy Haa

This film, featuring never-before-seen footage and photographs and interviews with more than 80 country music artists, explores the history of the uniquely American art form, country music. From its deep and tangled roots in ballads, blues and hymns performed in small settings, to its worldwide popularity, learn how country music evolved over the course of the 20th century to become America’s music. The 16-hour film will air on KMOS over the course of eight nights (Sept. 15-18 and Sept. 22-25,) and be available to stream on KMOS Passport.

At the film’s heart are the stories of unforgettable songs and the artists who created them: their emergence from humble beginnings, their musical influences and their breakthrough moments. The film explores the extraordinary connection between country music artists and fans and notes the enduring influence of particular songs and musicians across generations. The narrative ends in the mid-1990s as a young Garth Brooks emerges from a small venue in Nashville to achieve phenomenal success, brings country music to an entirely new level of popularity, and yet shows up to sign autographs for more than 20 hours at the Country Music Association’s Fan Fair.

“Country Music” is a production of Florentine Films and WETA, Washington, DC. It is directed by Ken Burns, written by Dayton Duncan, and produced by Duncan, Julie Dunfey and Burns.

Funding for the series was provided by Bank of America, the Annenberg Foundation, the Arthur Vining Davis Foundations, Belmont University, Tennessee Department of Tourist Development, the Metropolitan Government of Nashville and Davidson County, Rosalind P. Walter and by members of ‘The Better Angels Society,’ as well as the Corporation for Public Broadcasting and PBS.

KMOS serves the citizens of central Missouri with high-quality educational content and experiences online, over-the-air, and in our communities. It cultivates the professional development of students at the University of Central Missouri and encourages creative exploration through a multi-disciplinary learning lab that supports the classroom environment.