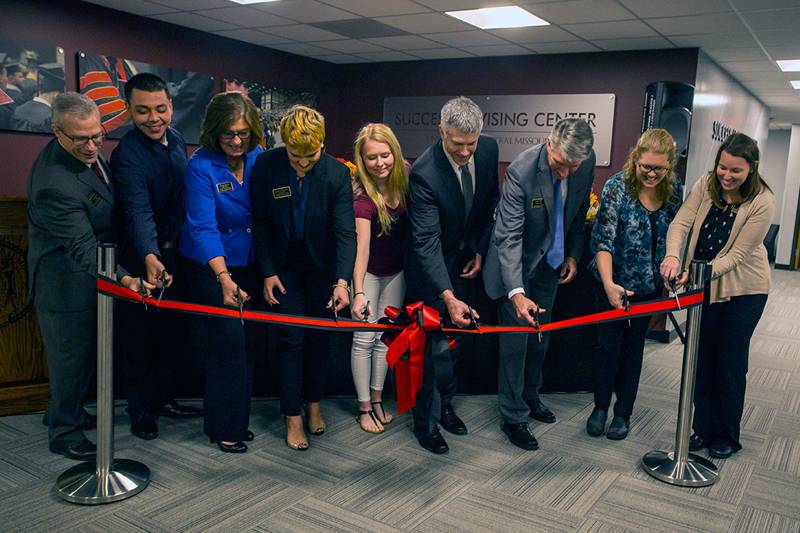 WARRENSBURG, MO – The grand opening of the Success Advising Center (SAC), representing the physical embodiment of the University of Central Missouri’s commitment to students, was celebrated Oct. 10 on the lower level of the Elliott Student Union.

Among those speaking at the event was Roger Best, UCM’s interim president. He said the SAC is UCM’s “conduit” to ensuring that students who enter the university leave with a diploma.

“We know it’s not enough to invite them into programs. It’s our commitment that they leave with a degree to be successful in whatever career path or educational path they choose, once they finish their education here,” Best said.

Following approval by the Board of Governors, the SAC was created during the summer of 2018 and opened this fall in space formerly occupied by the University Store. It offers a one-stop, holistic approach in making it easier for students to navigate through the education process by having a dedicated team of professionals who are available to answer a wide range of questions.

This initiative has included the transfer of all academic success advisors from various college offices throughout campus to this highly visible central location. These individuals are not only well informed about curriculum and paths students can take to earn a degree, but each also has undergone professional development training to expand the breadth of their knowledge in a wide variety of areas that enable them to better serve students. Also working within the facility are students who serve as success coaches, mentoring and assisting other students whose education paths are similar to their own. Three of them spoke at the grand opening along with Best and other UCM administrators who have been central to the planning and development of this new facility, which according to Ken Schueller, director of Success Advising, is currently serving about 200 students per day.

The SAC is playing a vital role in helping UCM to achieve its retention goals, which mean increasing the number of full-time freshman who stay in school from 70 percent to 80 percent. That will have a significant impact on the university’s ability to graduate more students.

Best commended the work of Burns & McDonnell, Kansas City, and Reasbeck Construction, Inc., Warrensburg, firms which handled initial space identification and construction planning to completion at the center. Although the concept was considered much earlier, Best estimated that it was less than nine months from the initial planning to completion. He also praised Mike Godard, interim provost-chief learning officer, and Chuck Ambrose, former UCM president, for their vision in making this facility a reality.

Godard followed Best on the dais. He spoke about conversations he had two years ago with Karen Goos, interim vice provost for enrollment management, in which they considered what it would take to change the trajectory of approximately two-thirds of UCM students who are first-generation, Pell eligible, or racially ethnic minorities who face unique challenges completing a college degree.

“We started to look to where we are and where do we want to be in terms of making sure each one of our students are successful, and we saw an achievement gap,” Godard said. He noted, however, that, UCM faces many of the same challenges as other schools nationwide which have a large population of students who are at risk of not graduating.

“We said, what if we took more of an equity approach? What if we could ensure that we put together the tools and resources, take down as many barriers as we could, and allow for each and every one of our students to be met exactly where they are every day,” Godard said.  “Every one of our students is different. Their backgrounds are different, what they may have already experienced is different, so we want to treat each student as an individual. That’s what this new success continuum is all about at UCM.”

He updated the gathering of about 100 people on the university’s success in obtaining a $2.7 million U.S. Department of Education Strengthening Institutions (SIP) Grant, made possible under the Title III program.

Godard said this is a five-year award, which gives UCM the ability to “be able to do what we are doing right now in terms of this new student success continuum, but kind of puts it on steroids.”

The grant has two primary objectives. The first is strengthening academic advising and educational support services to help students achieve their educational goals. The second is to create a more robust first-year experience. This will include hiring a new director to oversee the first-year experience program; developing a pilot-first year curriculum; redesigning the first-year curriculum; and developing a Summer Bridge program which will enable students to gain early experience in college.

“This is going to be a collaborative effort across campus, faculty, staff, and students, to ensure that the first-year experience is as robust as it possibly can be – again, taking that equity approach for each and every one of our students to make sure they are successful.”

Schueller introduced the three student success coaches, noting that collectively they have experience in TRIO, Open Option, and Advantage programs.

Sergio Del Toro, a junior from Kansas City, Kan., who is majoring in electrical engineering technology, spoke about the benefits of being part of the TRIO program, which led to a grant that gave him a financial boost with his education. He also talked about what it means to have received an Alumni Foundation Scholarship, which greatly aided his ability to stay on track to timely graduation.

“If it were not for the help of TRIO and an anonymous donator last semester, I would not be enrolled this semester,” he told the gathering, adding that he appreciates the opportunity to be in a position to help other students.

Now a junior, Tiera Walkenbach, Hermann, said that after her high school graduation, she felt lost about which direction to take toward a professional career, what degree to pursue and where to attend college.

“Then I found out about the Open Option program, and quite honestly that was what drove me to this program here. I thought I’d try it out and see if it works, and where I go from there,” she said. “The program literally changed my life. It gave me a path and that was something I didn’t have before. I found a major, public relations. I didn’t even know what that was until I came here.”

Also a public relations major, Elizabeth Wrisinger, Lee’s Summit, came to UCM as a student in the Advantage Program.

“My ACT score was extremely low in high school and I did not do well in school. When I came into the Advantage program, they made it so much easier on me in college. The advisors gave me resources to do my best here…I thank my advisors for helping me,” she said.

All three of these students have stories to tell that are typical of many students attending UCM. As student success coaches at the SAC, they now have an opportunity to pay it forward with other students much like themselves, sharing what they learned from UCM faculty, staff and alumni who cared about their success.