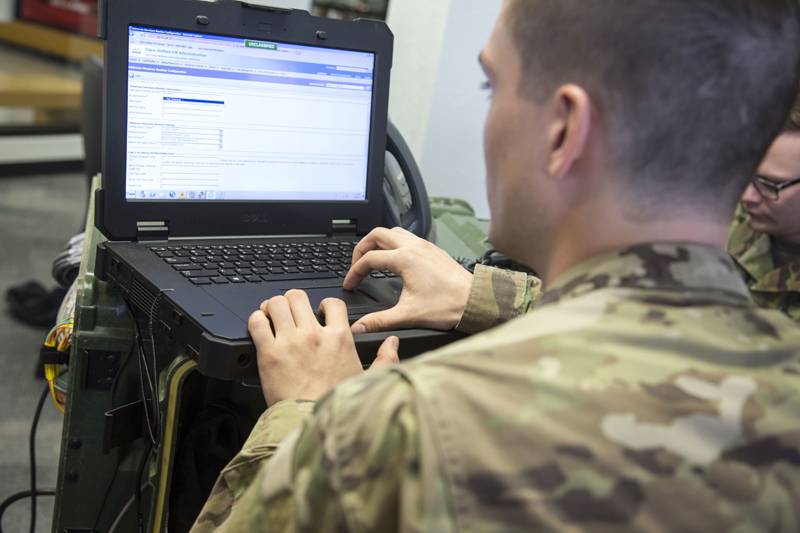 WARRENSBURG, MO – Building upon its cybersecurity training partnership with the Missouri National Guard (MONG), the University of Central Missouri participated in a joint exercise with the Guard Saturday, Oct. 13 to help enhance the practical learning environment in the area of cyber defense education.

The joint cyber exercise was open to cybersecurity students at UCM, and took place within an eight-hour period in a classroom and two computer labs in the Wilson C. Morris Science Building. In addition to training exercises in cybersecurity in a competitive setting, it included a luncheon and networking opportunities for the military professionals and students.

The MONG was represented by Lt. Col. J.R Roark and Lt.  Col. Shawn King, who provided leadership for a team which included four other cybersecurity professionals. The six-member student group was led by Hyungbae Park, Ph.D., coordinator of UCM’s academic cybersecurity program in the College of Health, Science, and Technology.

“The Missouri National Guard continues its efforts to foster and strengthen its partnership with UCM, remaining committed to the common mission to explore and implement innovative training and job opportunities for soldiers and students,” Roark said. “This weekend's training exercise was just another example of our successful collaboration aimed at achieving our common goals and accomplishing our mission.”

Park said during the exercise, two teams were formed, a Red team and a Blue team.  The Red team represented cyber attackers, which attempted to hack the Blue team’s computer systems and network in an effort to compromise them and steal sensitive information. The Blue team represented a cyber defense workforce and their goal was to protect their data from adversaries while maintaining normal network services. This included, for example, maintaining web service, cloud service, and remote access service, while also protecting sensitive information.

He said the exercise was a valuable learning opportunity for students. It also strengthened the relationship between UCM and MONG through invaluable field experiences that enabled Guard members to interact with university students.

“We had advanced students and very beginning students, as well,” Park said. “By having them together, we were able to give our beginner students an opportunity to learn what to expect from the cybersecurity competition.”

When the exercise concluded, the students and the cyber professionals gathered to discuss each team’s attacking tactics and defense strategies.  Feedback also was provided through a survey after the event.

“Through this continuous improvement process, we will improve our future exercise and expand this event to reach out to regional high schools. Eventually, it will create an opportunity to raise cybersecurity awareness across the region and to recruit more students to our cybersecurity program,” Park said.

Working with the military to address a need for well-trained technology professionals and citizen soldiers, UCM and the Missouri National Guard in October 2017 signed a joint agreement that includes collaboration on cybersecurity curriculum, officer education, and development of future cyber technicians. The joint cyber training exercise between UCM and the MONG was consistent with the goals of the memorandum of understanding that was signed in cooperation with Major General Stephen L. Danner, the adjutant general of MONG, and Chuck Ambrose, UCM’s former president. That ceremony took place at The Missouri Innovation Campus in Lee’s Summit, where the university and Guard hope to create a future cyber hub.

Laurel Hogue, Ed.D., vice provost for Extended Studies, affirmed the value of the ongoing relationship that exists between UCM and MONG, also noting opportunities that have resulted.

“We are thankful to the Guard for their ongoing commitment to student engagement,” she said. ”The Guard brings collective experiences, both from private and public sectors, that make the experience more valuable for students. Since the signing of our MOU, we've engaged in shared opportunities for students through the cybersecurity expo, joint recruiting efforts, and credit articulation for Army cyber defense training.”