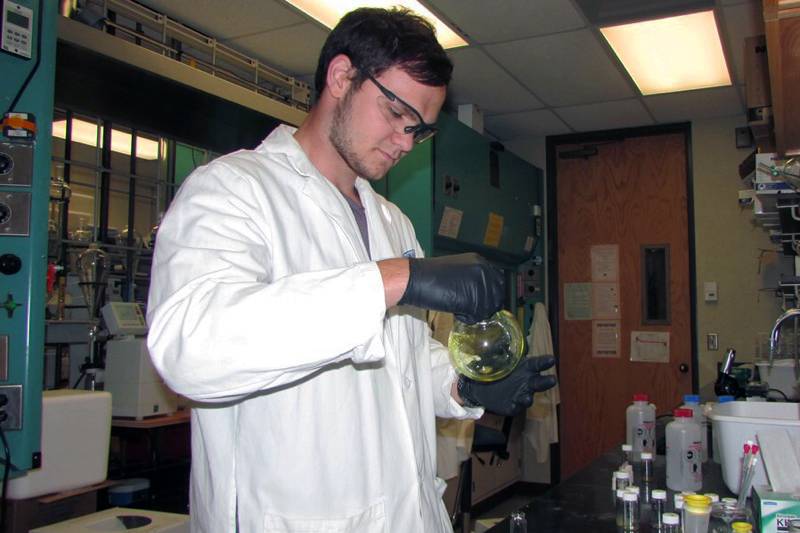 Before graduating from the University of Central Missouri with a bachelor’s degree in chemistry in 2015, Anthony Fatino led hands-on research work as an undergraduate on a project that has implications for medical diagnosis, while also contributing to an article co-published with two of his professors in the scientific journal, “Materials Letters.” The former Independence resident is now working on a Ph.D. in organic chemistry at Kansas State University.

WARRENSBURG, MO – As a first-generation student from Independence, Anthony Fatino whetted his appetite for scientific research early in his undergraduate studies working collaboratively with chemistry faculty members at the University of Central Missouri. As he continues to fulfill this passion five years later, he is watching the fruit of his early college experiences pay off with a research article published in the scientific journal, “Materials Letters.” This is happening as his UCM co-authors and mentors continue to press on furthering study of a new way to detect metal ions in aqueous solution.

Fatino grew up in Independence, and is currently studying organic chemistry at Kansas State University, Manhattan, where he began to pursue a doctorate in chemistry in fall 2016. He graduated from UCM in fall 2015 with a Bachelor of Science in Biochemistry degree, having served as an undergraduate research assistant alongside chemistry faculty members Dr. Chen Zhou, associate professor, and Dr. Jay Steinkruger, associate professor. The three of them have combined their scientific studies into the article, “Luminescent gold nanoparticles as dual-modality sensors for selective copper (II) ion detection.”

While Steinkruger and Zhou are experienced in the publication of scientific research, they stressed that Fatino’s contributions to this recent article add to its significance. Steinkruger noted that traditionally, scientific papers published in “Materials Letters” often come from graduate students who are conducting full-time graduate research under faculty mentors. That’s why it is noteworthy that the first author contributed as an undergraduate student. Not only does it demonstrate UCM’s commitment to helping students gain valuable undergraduate experiences, but it demonstrates Fatino’s ability to balance all of the research he provided for this project with a full load of college courses and additional employment.

“It’s always very exciting to be published,” Fatino said. “Having a paper accepted is almost a surreal experience because you know that you have left your footprint on the scientific community. I was happy to see that my hard work paid off, and that I could help UCM become more recognized for their research.”

Not long after coming to UCM in 2013, Zhou initiated the research project with help from an Opportunity Grant he received that fall from UCM’s Alumni Foundation. As research progressed, this also led to an external grant dedicated to support undergraduate research experience in analytical chemistry in May 2015. It was awarded to Zhou through a highly competitive process by the Undergraduate Analytical Research Program (UARP) Commission of the Society for Analytical Chemists of Pittsburgh (SACP).

Zhou talked about the project, noting, “From a scientific perspective, we are trying to develop nano-based luminescent sensors and utilize them for heavy metal ion detections.”

This published work focuses specifically on quantitative detection of copper ions in a physiologically-relevant environment. The synthesized luminescent gold nanoparticles can serve as a probe to quantify copper ion concentrations over a wide concentration range (nM to mM) so that researchers can find out if the level is harmful or not in a particular environment.

Zhou and Steinkruger said their research team with several additional undergraduate students are looking at ways to use their research for creating tools that contribute to a much simpler and faster way to detect metal ion concentrations. “Heavy metal ions possess a negative impact on the environment and pose medical threats to human health”, Zhou noted. “It is common to quantify heavy metal ion concentrations in body fluid samples to check for potential disease, but that often involves using sophisticated apparatus such as atomic absorption/emission spectroscopy and ICP mass spectrometry.”

“These require tedious preparation and generally the results need a couple of days to return to the patient,” Zhou said. “The purpose of our work long term, from a proposal perspective, is to develop a library of highly selective and sensitive gold nanoparticle-based fluorescent diagnostic tools. These sensors can perform direct and rapid analysis on body fluid samples to quantify different heavy metal ion concentrations, which can potentially advance the medical approach for diagnosis purposes.”

Fatino said he valued the experience taking the lead role for hands-on research work on the project. He also described his specific duties which describes how the luminescent sensors were developed.

“I was responsible for synthesizing and characterizing all of the luminescent gold nanoparticles,” Fatino said. “The synthesis was completed by mixing chloroauric acid with organic ligands and left to react. Once the gold nanoparticles form and start to become fluorescently active, I was able to perform various analytical techniques to analyze their fluorescent properties in various copper solutions of different concentrations, and determine changes of particle size in these copper solutions.”

What may have seemed like long and tedious hours at the time proved to be a valuable learning experience.  It also contributed to Fatino’s decision to further his knowledge of chemistry with a Ph.D., which he hopes to complete in spring 2021.

“Undergraduate research was very instrumental in my decision to continue researching and attend graduate school,” Fatino said. “I was fascinated by learning new skills in the laboratory setting, and having the time to work personally with great advisors like these two (Zhou and Steinkruger). When I got to KSU, I felt I was prepared for many different challenges because of my education and experience.”