UCM Students Recognized for Success at University of Iowa Hackathon 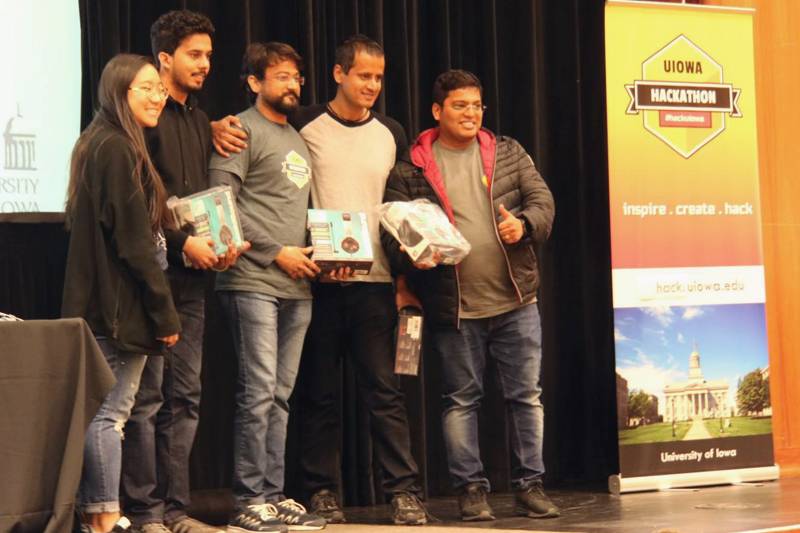 WARRENSBURG, MO – Four University of Central Missouri graduate students were recently recognized by faculty members in the Computer Information Systems and Analytics Division for their category win at an annual two-day Hackathon at the University of Iowa, Oct. 6-7.

Students won the “Best Use of Authorize.Net by MLH” award at HACKUIOWA, an event that took place in Iowa City. The competition was open to all university students who are passionate about creating things with technology.

They joined nearly 400 students from across the country who participated in the competition, sponsored by Major League Hacking. MLH is an official hacking league that features more than 200 weekend-long invention competitions that “inspire innovation, cultivate communities and teach computer science skills to more than 65,000 students worldwide,” according to the MLH website.

During the competition, teams were formed to work or “hack” on projects in an open format, which could involve applications using hardware, desktop, web or mobile devices.

According to Dharga and Sengar, the UCM team developed a project called “Need Volunteer” using application program interfaces (API), which are a set of protocols and tools for building software applications that specify how software components should interact. The team worked with DomainName, Google Maps, Google Cloud, Authorize.Net and more to create an application, and the team captured the top award for its use of Authorize.Net.

Dharga said “Need Volunteer” is a way for individuals or orgranizations who need volunteer support to find it by posting their need on the website developed by the UCM team.

“If something happened, like we are going into a disaster relief camp and we need more volunteers to join our team, a person can make a post and invite other members. Or, if someone wants to donate for that disaster relief then can donate from our application,” Dharga noted.

He also added that the application is helpful for individuals who are relocating to a new location and don’t known anyone. They can use it to help find volunteers to help them move in.

Dharga said he and other team members enjoyed the hackathon experience, noting, “This type of competition is very useful for students. They can create new things with technology, come with great ideas, make new friends from other universities, and meet great leaders and managers from IT companies.”

Plaques were presented to two of the team members, Dharga and Rajora, at the conclusion of the first presentation in a new “big data and analytics series” that was launched Oct. 19 with guest speaker Paul Boal, vice president of Ameritech Solutions, St. Louis. This series presentation in the Ward Edwards Building was coordinated by Dr. Prasad Rudramuniyaiah, who also assisted Dr. Jose Mercado-Mendez, chair of the Division of Business Analytics in the Harmon College of Business and Professional Studies, with announcing the hackathon team’s success and honoring team members. This included plaques for those who could not attend.