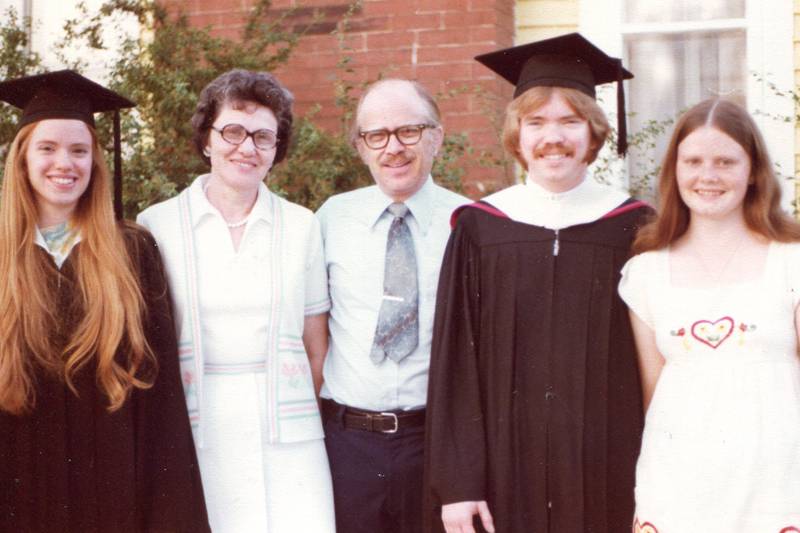 You may have heard the term “legacy family,” but what does it really mean? At the most basic definition, legacy families are students and alumni whose families, including parents, grandparents and/or siblings, attended or currently attend UCM. It’s through these families that the heritage of UCM passes from generation to generation.

I come from a long line of Central alumni—four generations to be exact. My great-grandmother graduated from what was then the Normal School No. 2, in 1913. My grandfather followed, graduating from a newly renamed Central Missouri State College in 1946.

Next came my father and mother, who graduated in 1975 and 1976, respectively, from—you guessed it—the newly renamed Central Missouri State University. Finally, there’s me. I graduated from UCM in 2011, and my brother is currently taking classes toward his degree as well. In between our four generations, there have been 13 additional family members who have walked the halls of Central.

It’s crazy to think about, really. My great-grandmother was here when she heard the news that the Titanic sank! My grandfather was here during World War II. My parents were here near the end of the Vietnam War, and I was here when Osama bin Laden was found.

Your next question might be, “why?” Why have so many of us chosen the same school instead of venturing off elsewhere? For my great-grandmother, it was a school close to home where she could get her two-year teaching degree before continuing on to Bible college. For my grandfather, it had an affordable industrial arts degree program.

My mother became a Central student because her sister was here and it was a nice sized college. My father came to the Warrensburg campus after attending an extension center of Central Missouri State College in his hometown of Independence, Missouri, his first year. For me, choosing UCM was easy. Aside from the invaluable scholarships and other financial aid I received, I had seen the success my family had with their degrees. I knew that I would be getting the quality education I needed to reach the goals I had for myself.

There’s something so special about sharing an Alma mater with my relatives. I’m able to feel a kindred closeness to a generation of my family that I never got to meet in person. Knowing that I’ve walked the same sidewalks and looked up at the same trees and the same stone buildings that my great-grandmother did more than 100 years ago is a connection that I wouldn’t have without UCM.

Being part of a legacy family means being part of a shared history. It’s being able to tell stories, to reminisce and to relate. It’s the feeling of nostalgia that we all get when we hear the Marching Mules practice each fall, or the cannon go off when the Mules score a touchdown. It’s how every Homecoming turns into a family reunion. It’s how every new job opportunity feels like an exciting win for us all. It’s singing every word to UCM’s Alma mater song at commencement, and it’s how each new family member to walk across the stage fills us with a little more UCM pride.

Most of all, it’s knowing that no matter what happens in life, we have the foundation of a meaningful and valuable education. Now, I would never intentionally pressure my future children into following our footsteps…but, here’s hoping for generation #5.