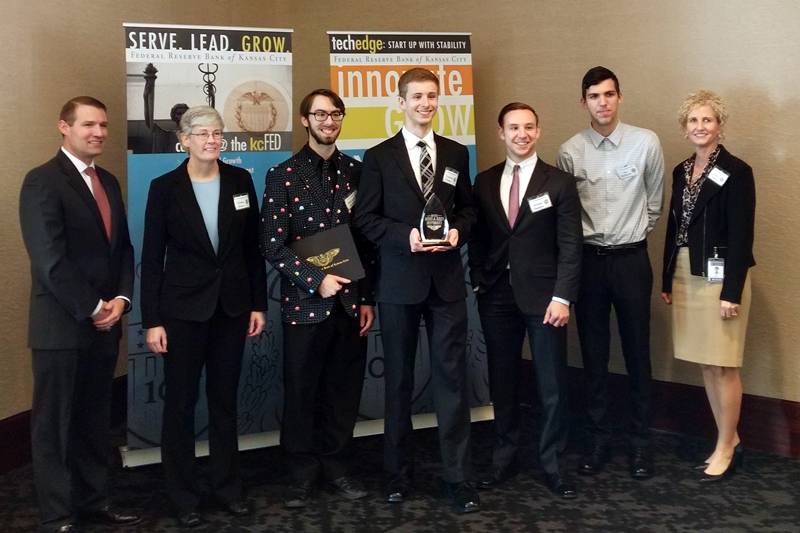 WARRENSBURG, MO – For the second consecutive year, two student teams from the University of Central Missouri have finished in the top three positions at the annual Federal Reserve Bank of Kansas City Code-A-Thon. With top entries announced Thursday, Nov. 1, UCM captured first- and third-place honors among nine universities from six different states that participated in this highly competitive event.

According to Belinda Copus, an assistant professor of computer science who is also one of the faculty members working with UCM teams, the theme for this year’s event was “Don’t Make Me Think,” which was unveiled the evening of Friday, Oct. 19.

Copus said that on opening night, the three teams immediately went to work by brainstorming about a real-world problem to be solved, focused on the theme. This later led to designing a software solution, followed by extensive work on their projects over the duration of the weekend.

“Team members divided the required tasks and got to work,” Copus said. “For the next 48 hours the participants coded, hit brick walls, found ways around issues, and learned new software tools and technologies on the fly to produce three very high-quality solutions.”

Mules 1 tackled the problem, “What’s for dinner?,” in which the group designed and implemented a web-application that automatically generated a menu of meals and recipes based on the users’ dietary restrictions, needs and palate.

“Their application was able to dynamically replace a chosen meal with a clever ‘reroll’ feature. This application is planned to be extended to interface with grocery stores for purchase and delivery of ingredients, and also to manage home pantry inventory,” Copus said.

The Mules 2 project benefits UCM’s Skyhaven Airport. Whereas, tasks such as flight scheduling, instructor and student scheduling, and flight zone management, are currently handled by a dispatcher using manual methods, the team developed a web-based application that allows for all of these tasks to be streamlined and automatically updated. This frees the dispatcher to concentrate on other important tasks. The team’s application, “Virtual Dispatcher,” was created with much attention given to user interaction and ease of user experience. The team is currently working with staff at Skyhaven Airport to make the application a reality.

Copus said Mules 3 developed an application designed to help individuals plan a day of activity. “Their web-based application used technology that generates activities going on around you and then suggests what to do for the day,” she said. “Their application also included restaurants near these activities for a well-rounded experience.”

Once the teams had working applications, each produced their own video of the app. Teams spent more than 40 hours working together over the competition weekend, and submitted their entries on midnight, Sunday, Oct. 21. Competition judges from the Federal Reserve Bank of Kansas City judged 17 submissions created by teams with a combined total of 73 participants. Mules 1 and Mules 2 were two of the three teams selected to advance to the final round on Thursday, Nov. 1. Each team made a presentation at the Federal Reserve Bank of Kansas City campus, where top teams were named.

Copus praised UCM computer science faculty and department leadership, as well as members of the Office of Technology and operations staff who helped make this program work smoothly. She also commended the cooperative spirit and determination of UCM’s student team members.

“I am continually amazed how five students, forming one team, which have not previously worked together, are able to agree on a problem to solve, and then self-organize to create a high-quality solution. Often the team members must step outside of their comfort zone and learn a new technology in order to solve their problem,” she said. Copus added that considering the pressure of time constraints, all teams demonstrated “true grit” and a single-minded focus on accomplishing their goal.

“While an exhausting event, every one of our 15 participants is ready to do it again next year, and agree that no classroom experience could replace their real-world experience gained in this mere 48 hours,” Copus said.