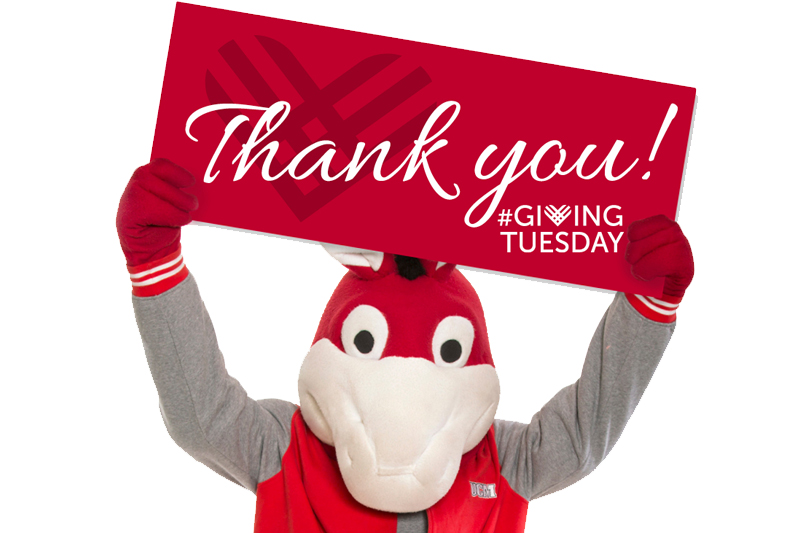 WARRENSBURG, MO – With the help of a generous donation from Hutchinson, Kan., resident Dan Power, class of 1973 and 1974, the University of Central Missouri raised more than $43,000 to help fund student scholarships during a Giving Tuesday event conducted Nov. 27 by the university’s Alumni Foundation.

Giving Tuesday is part of an international movement that was established to provide individuals an opportunity to support their favorite charitable organizations. For the past seven years, it has coincided with the first Tuesday after Thanksgiving, and is dedicated to promoting philanthropic contributions to organizations across the globe.

University President Roger Best said he was grateful for alumni who are willing to give back to the institution. In an email to help kick off the event, he noted that the generosity of alumni “has had and continues to have a significant impact on our students, including those for whom a college education would not be possible without financial assistance.”

Best also told alumni, “I know I am not alone in being grateful for your generous contributions. Last month, during the ribbon-cutting ceremony for our new Success Advising Center, many students spoke about their personal success stories and shared how your philanthropic support has helped make it possible for them to study at UCM.”

All gifts provided during Giving Tuesday support the Gift of Success initiative, providing financial contributions directly to the UCM Fund for Student Success through the Alumni Foundation. This fund is specifically dedicated to scholarships for students who face financial barriers. The goal is to positively impact students’ ability to earn meaningful degrees.

During Giving Tuesday, $18,177 was raised, in addition to a $25,000 contribution from Power to help encourage others to give toward the Fund for Student Success.

The university has estimated that an average of $672 is often all that stands in the way between students and their ability to financially continue their education at UCM.

“I like to think about the Fund for Student Success in terms of the $672 gap our students face. In those terms, our Giving Tuesday efforts can assist 64 students in persisting to graduation,” said Jackie Jackson, director of annual giving at UCM.

Power was pleased to be part of the effort to help high-performing students obtain the support they need to cross the degree finish line. A former UCM wrestler, Power taught and coached high school wrestling in the Odessa School District after earning his degrees from the university. He went on to work as a real estate agent, then opened a branch for financial investments and advising firm Edward Jones® Investments in Hutchison, Kan. Power later became a regional leader in the financial advisement field in western Kansas. He was named Distinguished Alumni for Service by UCM in 2016 and served on the Alumni Foundation Board of Directors.

Individuals who want to learn more about how they can make a difference in the lives of UCM students through their generosity can do so at ucmfoundation.org/give.

About the University of Central Missouri: With its main campus situated in Warrensburg, Mo., in addition to a facility in Lee’s Summit, Mo., the University of Central Missouri is a comprehensive state university that has four academic colleges and serves nearly 12,000 students. Providing undergraduate and graduate education, the university is committed to offering students an opportunity to experience learning to a greater degree through engaged learning, future-focused academics and activities that allow them to gain a worldly perspective and experience a culture of service.