WARRENSBURG, MO – Jessica Carnnahan, a senior at Lee’s Summit North High School, today got an unexpected boost to putting herself on a more affordable road to a college degree. She was surprised by representatives of the University of Central Missouri who paid a visit to her classroom to let her know she was the winner of a free tuition giveaway.

Shortly after she entered her 11:30 a.m. class, Carnnahan was presented a large check signifying that she was receiving free tuition for up to 30 credit hours at UCM, effective for the fall 2019 semester. She was randomly selected for the tuition giveaway based on a contest that was open to all freshmen and transfer students who applied for admission to UCM prior to Jan. 1, 2019. Carnnahan was the only student selected among 4,677 applicants.

The surprise announcement came with much fanfare, including a classroom visit by UCM’s costumed mascot, Mo the Mule,  who also was joined by presenters Mike Godard, interim provost – chief learning officer, and Drew Griffin, assistant vice provost for admissions and financial aid. In addition to free tuition that essentially covers one year of courses, Carnnahan also received UCM memorabilia and cookie cake to help celebrate with her classmates.  The presentation was made during the International Baccalaureate Psychology and English class taught by Andrea Hood-Johnson.

“This is the first time we have ever done this at the University of Central Missouri. This was completely random and nothing that anyone had to apply for other than turning in their application, Godard said. “We’ve heard great things about you Jessica. I know that you’re going to be a great student on our campus.”

“I was just sitting in class expecting it to be a normal day, and then it wasn’t,” Carnnahan said with a huge smile as she spoke to media shortly after learning that she received financial boost toward her higher education.

Planning to graduate this spring, she said she chose UCM because of its reputation for an excellent  psychology program, which is her intended major. She met previously with UCM’s psychology faculty and was excited to learn about opportunities such as internships that will contribute to her education. She hopes to use her future degree at UCM as a stepping stone to eventually become a psychiatrist.

In addition to an academic program of interest, Carnnahan said she is pleased to be attending the same school her mother claims as her alma mater. Both of her parents, Lester and Becky Carnnahan, attended the presentation. The family has resided in Lee’s Summit about 25 years.

“It is great to know that she is going to be close, and will be helped out with the financial burden of college,” her mother said. Her remarks were also echoed by her father. He added, however, that Jessica worked very hard throughout high school, which makes getting financial assistance more rewarding.

Griffin said he appreciated the cooperation of the Lee’s Summit R-7 School District and Lee’s Summit North High School for helping the university to make this event a success. While this is the first time UCM has offered a free tuition giveaway, it may pave the way for similar events in the future.  Griffin said he plans to meet with the provost and enrollment management leaders to explore the possibilities. 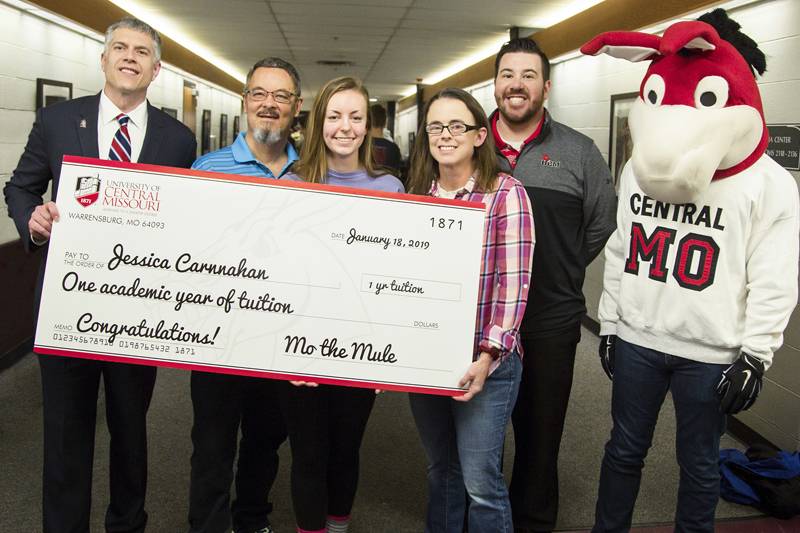