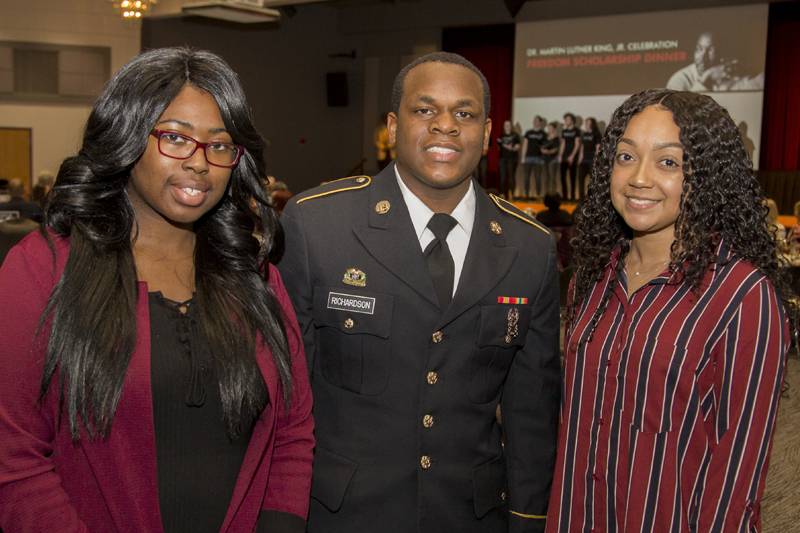 WARRENSBURG, MO – In a ceremony titled “One Dream, One Nation: Moving Forward Together” a crowd of about 260 people learned about Martin Luther King Jr.’s impact as a civil rights leader while also celebrating three students who will realize their dreams for a college education as recipients of University of Central Missouri scholarships in King’s name.

The annual dinner is a fundraiser to help finance scholarships through the UCM Alumni Foundation. Freedom Scholarships were established at UCM in 1994 by the Association of African American Faculty and Staff. The purpose is to provide an opportunity for students from populations historically under-represented in higher education to obtain their undergraduate degree. Part of the selection process involves students writing a 500-word essay on the topic, “Keeping the Dream Alive.”

During the event, comments about what the scholarship means to each student were shared with the audience.

“Receiving the MLK Scholarship has helped to reduce my college debt and allowed me to continue my last year at UCM,” Brown said. She pointed out that with the Freedom Scholarship and other financial awards that she received as a student she is able to graduate this May with only $2,000 in student loans.

Woodson, who hopes to one day work at a children’s hospital, noted, “This scholarship means a lot because it identifies who I am, and I am the first generation (college student) in my family. It helped give me an opportunity to go to school and accomplish my goals.”

Richardson has set a goal to become an officer in the U.S. Army Reserve, also hoping to pursue a professional career as a U.S. marshal.

“I want to keep his (King’s) dream alive and one day, hopefully, I can make a difference somewhere,” he stated.

In his speech, Page, a university alumnus who currently works for the National Association of Student Affairs Professionals in Washington, D.C., described what it was like growing up as the son of a bi-racial couple. His father, an African American, was in the military when he met his mother in Japan. While Page’s father once questioned his son about what he knew about “responsibility,” he said his mother showed him what it means to be responsible by her actions.

“My mother knew about responsibility. Fighting for the dream was simple because it was all about her children,” Page said.

“Junior,” Page recalled his mother telling him, “get your degree and you’ll be the first one in our family who has one.”

“That is a dream I kept,” Page said. He added that his mother passed away two weeks after completing his bachelor’s degree at UCM, then known as Central Missouri State University. He went on to further his education and continues to have a career in the same field that spans approximately three decades.

Page outlined four ways students, faculty, staff and others in the audience can honor the memory of King while keeping dreams alive. This includes creating a legacy of service to others, looking for ways to help empower others to achieve their education goals, having an attitude toward success that inspires others, and devotion to opportunities to make a difference in other people’s lives.