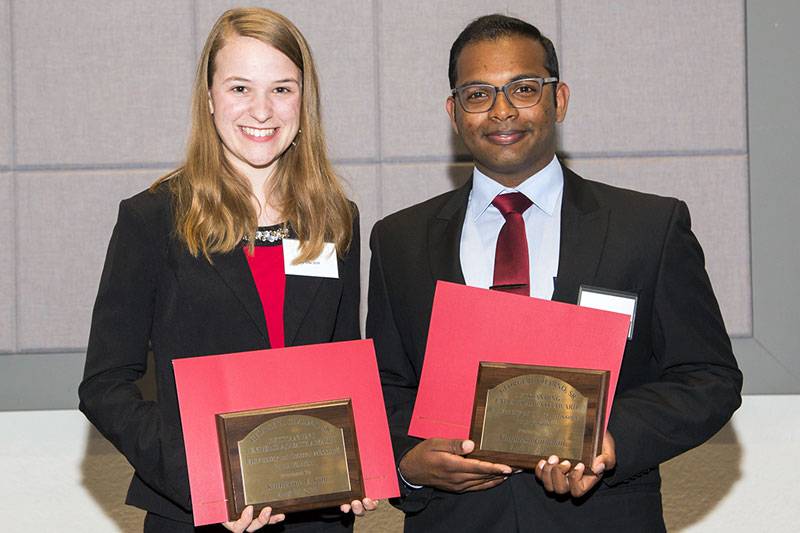 WARRENSBURG, MO – The Charno Award, an honor presented annually to a top male and female member of the graduating class at the University of Central Missouri, was awarded  April 11 to Yuganesh Gunalan, a senior aviation management student from Puchong, Selangor, Malaysia, and Katherine Kim, senior international studies major from Oak Grove, Missouri.

The awards were presented in a ceremony that took place in the Elliott Student Union. Shari Bax, vice provost for Student Experience and Engagement, introduced the Charno recipients, Roger J. Best, UCM president, made the award presentations.

The Charno Award is named after George Charno, Sr., a Kansas City attorney who established the award in 1940.  Each year, recipients are chosen among students who are named to Who’s Who at UCM. Eighteen students were honored prior to the presentation of the Charno Awards.  Who’s Who recognizes students who are well-rounded and who have contributed to campus in a variety of ways. Selection is based on a combination of criteria, which include: leadership, scholarship, character, involvement in campus organizations and extracurricular activities, service to the university, and involvement in one’s academic department. The two Charno Award recipients also will be recognized during the May 10-11 spring commencement exercises.

Bax noted that the committee of faculty and staff members who made the Charno Award selection named four finalists for the award out of those students selected for Who’s Who.  The other male and female finalists for  the Charno Award were Tara Hansen, a Platte City, Missouri, resident who graduated in December 2018 with a  bachelor’s degree in marketing, and Wesley Turner,  a senior biology pre-medicine major from Racine, Wisconsin. All four of these individuals were selected among a potential pool of 2,000 students who met degree requirements in time for consideration for this award.

Students selected for the Charno Award exemplify the type of individuals for whom the honor is intended.  Both have excelled academically and have been active in many different types of activities that have allowed them to enhance their leadership skills while also serving others.

Kim is the daughter of Bill and Jennifer Kim, Oak Grove. Outside the classroom, she has served on the Dean’s Student Advisory Council, First-Year Experience Panel, and Planning Day Study Abroad Panel. She also is a member of organizations that include the UCM Honors College, UCM Navigators, Conversation Partners Program, the Japanese Student Organization and UCM Rotaract, for which she has served as president.

She has studied abroad in Japan and the Middle East, received the Global Vision Scholarship for Service Learning in Tanzania and worked as a conversational English teacher for the Belarus Summer English Academy.  While her major is International Studies, she enjoys music and is a percussionist in the UCM Symphonic Wind Ensemble.

Always looking for ways to help others, Kim is the founder of From My World to Yours. This is a program that seeks and collects donations of household goods for international students who come to UCM to study and don’t have the basic items needed to set up a household.

In addition to his work in the classroom, Gunalan has been involved in many groups and organizations in which he has held the highest leadership position or has been actively involved as a member and officer. This includes service as president of the International Student Organization, Missouri Airport Management Association and American Association of Airport Executives. He has served as vice president of alumni relations for Delta Sigma Pi business fraternity, and was secretary of the UCM International Affairs Committee.

Gunalan also participated in the International Food Show, International Student Organization cultural night and the UCM Homecoming parades. He has worked as a Community Advisor for the UCM Housing System for the past two years, as a phone-a-thon caller for the UCM Alumni Foundation and currently works at the UCM Max B. Swisher Skyhaven Airport. He also has participated in Boy Scouts of America.