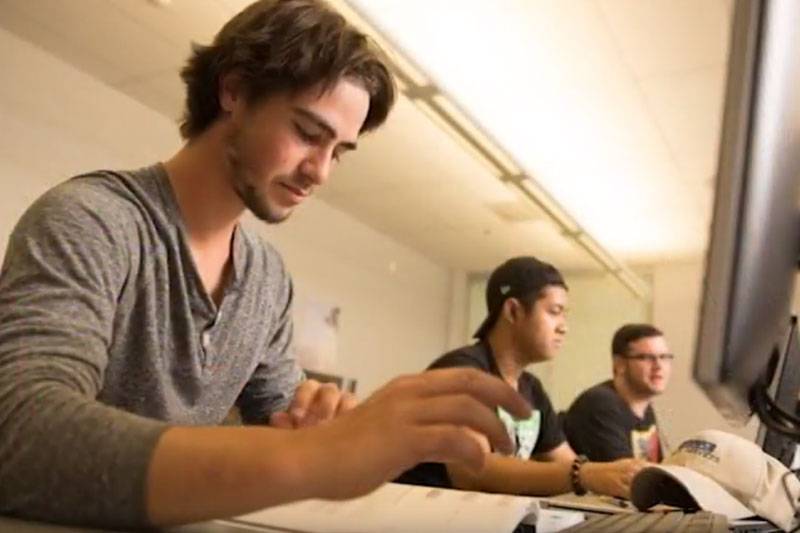 Belinda Copus, program coordinator for computer science and software engineering, was one of four UCM faculty members who joined students at the event. She said the contest consisted of eight questions that were presented at the beginning of the competition. Challenges faced by students required a higher level of thinking than problems typically presented in the classroom. Students were required to solve each problem by creating a computer program, an undertaking that followed considerable time spent designing a solution on paper.

“The team of up to three persons has one computer to share. They must work as a team to complete each program,” Copus said. “Several programming languages are allowed to be used. The time it takes to create the solution is also tracked and the teams are judged on how many correct solutions they submit and the time it took to complete the solutions.”

“Teams will approach problems in a class fashion, but it is often the unusual, or out-of-the-box solution that allows the team to arrive quickly with a working solution,” she said.

Team C captured first place by solving two problems in 88 minutes. Each of the other UCM teams submitted solutions, but the time it took to create a solution was not strong enough to place.

“The problems this year were more challenging than usual,” Copus said. “All of our teams put forth their best effort and stretched their minds and skills to new heights. Skills in problem decomposition, algorithms, mathematics and programming had to be applied to the problems in addition to team work. John, Ryan and Mikhail demonstrated an incredible ability to contribute their individual strengths and come together to tackle this very challenging problem set.”

Congratulating all 15 UCM students who participated, Copus said she is continuously amazed by the fearless approach her students take in this voluntary competition, particularly knowing the challenges they face.

“We have very talented and industrious students on our teams. When competition is presented, our teams have a singular focus to reach the target and at the finish have given everything they have – skills, thinking, and team work,” she added.

With the 2019 win, this marked the second consecutive year a UCM team finished first in the CCSC-CP competition.

Four other participating UCM teams and their members included:

“We are very proud to have such dedicated students and are already preparing for next year,” Copus said.

UCM faculty members from the School of Computer Science and Mathematics who joined students for the competitive event were Dabin Ding, Jason James, and Mahmoud Yousef.