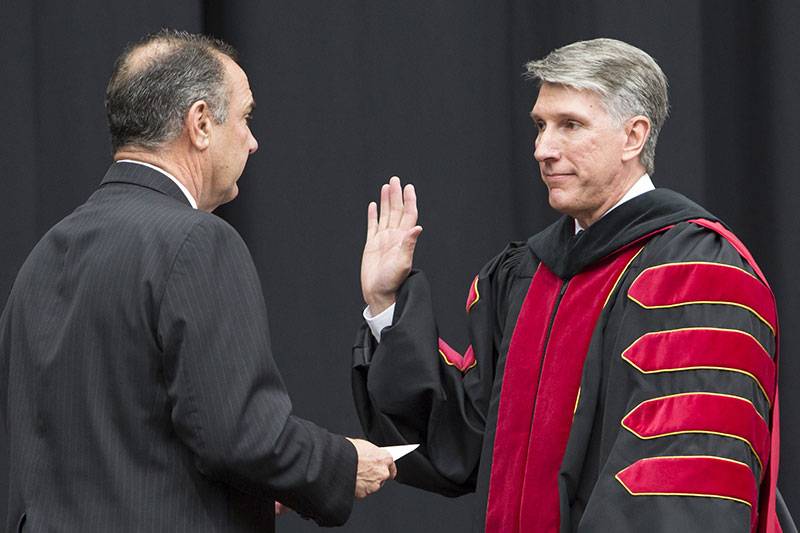 WARRENSBURG, MO – With the theme “Milestones,” reflecting on the University of Central Missouri’s rich tradition of educating students, Roger Best, Ph.D., was installed as the university’s 16th president during the inauguration ceremony that took place in the Multipurpose Building arena.

Best, who was named to the post on Nov. 2, 2018, by the Board of Governors, delivered the inaugural address after hearing comments from two special guests. Joining the platform party were Missouri Lt. Gov. Mike Kehoe and Commissioner of Higher Education Zora Mulligan.

“This is a good day. It’s also a good day to remember that being a college president is not for the faint of heart. The hours are long, the stakes are high, and the stage is very, very public,” Mulligan told the audience. “Students, faculty and staff, I ask that you consider President Best’s decisions with empathy and patience. The ideas he’s juggling, the issues he’s balancing are often more difficult than is apparent. I want to tell you that from all I know about President Best is he’s approaching this with a heart for service and demand for excellence.”

“Tomorrow’s workers are being trained here on a daily basis. They are the next generation of teachers, pilots, public servants, bankers, soldiers, business owners and college administrators. They must also be pprepared to step into these roles,” Kehoe said. “Dr. Best, what you are doing here is important. Students, faculty and staff, what you are doing here is important. My desire for the University of Central Missouri is that it continues to be an institution where learning is the ultimate priority, where problem solving skills are cultivated, tested and refined; where critical thinking is valued beyond group think,  and where a long range of ideas and values are discussed and respected.”

With his opening remarks to the gathering, Best spoke candidly about three great honors in his life. His comments showcased his deep faith in God; the love and appreciation for his wife, Robin Best, and being the stepfather to Robin’s two daughters; and the honor he has been given to serve as the 16th president of what he describes as an “incredible institution.”

“I suppose in moments such as these it is only natural to consider how we arrived here, what words were spoken, what actions taken which change the course of one’s life,” Best said in his speech. “Because, as our mathematics faculty and their students will affirm, only a slight change in degree at the origin will result in a remarkably and significantly different point than the original destination if one travels long enough.”

“For me, maybe it was that adjunct professor I had in my Principles of Management course who, following a class presentation, asked if I had ever considered being a college professor,” Best said.

Consistent with the “Milestones” theme, he continued his inauguration remarks by tracing some of the university’s accomplishments from its opening on May 10, 1871, as the State Normal School for the Second Normal District to a comprehensive university that in 2019 serves students from across the globe.

“And while I can point to many other instances in my own life where a word of encouragement, a simple question or an opportunity which was provided changed my trajectory, I instead want to take a moment and reflect upon some of the milestones in the life of this tremendous institution. In many of those moments we can see when the course of our history was saved or dramatically altered. Some of these moments may have even seemed small at the time, but ultimately they helped create who we are today.”

Best pointed out, for example, George P. Beard, UCM’s first president (then called principal), ensured the first classes ever offered started on May 10, 1871, with a robust enrollment of 30 pupils even though there were no buildings and it was a mere 14 days after the formal creation of State Normal School #2.

In 1873, the textbook rental system was established a system which survives to this day. By 1874, many were questioning whether a Normal School was even needed, and this eventually led the institution to become a senior college. The lab school was founded in 1899, and in 1910, “extension classes” were established and the institution thereby became a leader in distance education, Best said.

“In 1915, the main academic building, the science annex and the training school burned to the ground. The community valiantly saved the Dockery Building, which at the time was Dockery Gymnasium.  Having no classrooms, the president announced spring classes would begin as scheduled in a few short days.  Warrensburg rallied around us and found classroom spaces,” Best told the gathering. “With the future of the institution in doubt, the state legislature came together and appropriated money to rebuild, thereby ensuring the continuation of this institution.”

During the 1921-1922 academic year, the Mule was formally adopted as UCM’s mascot. American Legion Boys State of Missouri came in 1953, and in 1954, “although much later than it should have been, we once again were ahead of many other institutions when two African-American students were the first to be admitted to our university,” Best said.

In 1984, UCM made history and gained national media attention by becoming the first institution to win national championships in men’s and women’s basketball in the same year, and remain the only university to have done so on the same court the same day.

“In 1996, we were granted a statewide mission in Applied Science and Technology, and in the early 2000s began offering our first online courses along with re-establishing a KC-metro-based residence center when the Central Summit Center in Lee's Summit opened,” Best remarked.

“Today, we are considered a military engaged university, we have nationally ranked academic programs, we continue to win national championships in athletic and academic competitions, and our students continue to change the world as alumni and while currently enrolled,” the president added.

Best stressed the importance of celebrating milestones, and the opportunity to “draw inspiration from where we came from. But we must not dwell in the past. We cannot be content with who we are today, for today is simply the culmination of who we have been. Instead, we must look to the future and consider who we will be, because tomorrow’s successes can be…only if we plan for them.”

Best takes over as president at a time when many challenges face higher education institutions. He spoke about many of them, including the inadequacy of public funding; the inability of the current and next generation of learners to afford advanced education; a societal indifference toward the value of higher education; the perception that higher education employees are underworked and overpaid;  increased competition for a declining traditional student base; changing student demographic; and a world where learning occurs in ways not envisioned a few years ago, in which the pace of change is almost too fast to measure.

“So I ask you today, will join me on the hard path? To our faculty and staff, will you look at your role as one of great service to our students and each other? Will you recognize the tremendous potential you have to change the course of someone’s or this institution’s history? Are you willing to think anew if our circumstances so demand?  To our students, will you strive to fully comprehend the incredible opportunity you have today, and commit to completing what you have begun? Will you offer your support for the great work we do even after you have finished your UCM journey? To our alumni, will you be that difference maker for your alma mater just as we were for you?”

Best, who grew up in Georgia, began his UCM journey in August 1995 as an assistant professor of finance, and climbed the faculty ranks to become a professor in 2005. He was named chair of the Department of Economics and Finance in 2003; associate dean of the Harmon College of Business Administration in 2008; and dean of the college in 2010.

Following an extensive restructuring of academic programs, Best began service as dean of the newly formed Harmon College of Business and Professional Studies in 2011. He became interim senior vice president for Finance and Administration in August 2017, and concurrent with a university administrative reorganization, he was appointed as the university’s executive vice president and chief operating officer in January 2018.  The Board of Governors named him interim president Aug. 1, 2018, a position he held for three months before becoming president in November 2018.