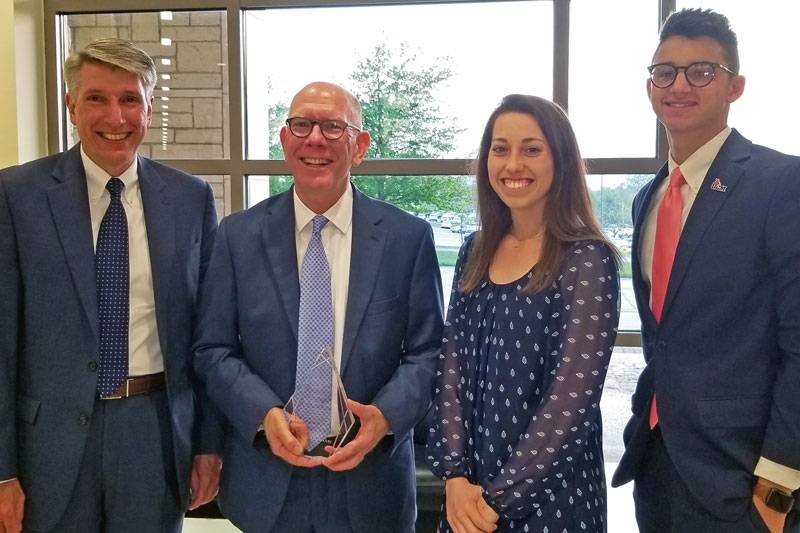 WARRENSBURG, MO – In recognition of qualities that include a commitment to public service, former University of Central Missouri President Charles “Chuck” Ambrose, has received the top honor presented by the Student Government Association. During a ceremony April 22, the new president and chief executive officer of KnowledgeWorks, Cincinnati, Ohio, received the James C. Kirkpatrick Excellence in Governance Award.

The award was established in 1985 to honor the public service of James C. Kirkpatrick, who served for 20 years as Missouri Secretary of State, and was a longtime member of the university’s governing board. Recognition is given annually to an individual who promotes the public interest, practices good governmental procedures and has shown loyalty to the university.  The recipient is student nominated and selected by members of the SGA.

In a ceremony that took place on the first floor of the James C. Kirkpatrick Library at UCM, University President Roger Best introduced Ambrose and spoke about a number of attributes that made him an excellent recipient of the award. Among them is the way he has been a strong proponent for higher education and has served the public interest.

“I can think of no one in my tenure at this institution who did more in the state and in the nation to promote higher education,” Best said about Ambrose “He did so branding the institution in a way that allowed us to become a national leader in accelerated education through the Missouri Innovation Campus.”

He said Ambrose “embodied the spirit of the award in becoming a tireless advocate for UCM while working through the state legislature to promote the value of higher education in the state, and to secure more funding for the university. He brought greater attention to the need for access to higher education from a broad spectrum of the public at an affordable price.”

Ambrose joined UCM in August 2010, and stepped down from his post in 2018 to accept his current position with KnowledgeWorks, an organization which allows him to continue to affect the promotion of higher education nationally as well as K-12 education. KnowledgeWorks is a firm believer in competency-based education and individualized learning.

In accepting the award, Ambrose said it was humbling to have an award with Kirkpatrick’s name attached.  He talked about the impact both Kirkpatrick and his wife, Doris, had on the university and beyond.

“It’s an award that really has significant meaning because of those relationships,” Ambrose said.

Ambrose spoke about the outstanding relationships the university has enjoyed over the years with people who have had an impact on the institution. He quoted a verse from the biblical book of Psalms, noting, “Our lines have been drawn in pleasant places and we are recipients of a delightful inheritance.”

“It is very difficult to be on this campus and not know that are lines are drawn in pleasant places and we have been given an inheritance by those who have come before us that we can never repay,” he added.

One of 34 people to now have received the James C. Kirkpatrick Award since its inception, Ambrose came to campus in 2010 after serving for 12 years as president of Pfeiffer University in Misenheimer, N.C. Shortly after beginning work at UCM, his leadership helped guide the institution through the building and implementation of a new Strategic Governance for Student Success Model in partnership with the Association of Governing Boards.  It also contributed to an extensive administrative and academic review process designed to provide a stronger, more viable educational experience for students, while reducing operating costs.  This was followed by a new strategic positioning initiative to provide a more articulated understanding of what makes the university unique, and help guide the institution in establishing its future priorities.

While serving the university, Ambrose built strong relationships with the men and women who serve this country through initiatives that include the establishment of the Whiteman Advantage Program, the Military and Veterans Success Center at UCM, and a Military Tuition package specifically for active duty service members, their families and veterans. As evident through his 2017-18 appointment as president of the Missouri Council on Public Higher Education, Ambrose has been a strong advocate for higher education in Missouri, and a proponent of partnerships with business, industry and public education that help accelerate degrees, reduce student debt load and bridge the skills gap in high-demand fields. This led to the development of The Missouri Innovation Campus in Lee’s Summit in 2012 in cooperation with the Lee’s Summit R-7 School District and Metropolitan Community College.  The opening of a new MIC facility followed in 2017. Ambrose’s efforts to build student enrollment and provide 24/7 environment to serve students resulted in the largest enrollment in UCM’s 140-year history, and construction of the first student housing-retail complex on campus, The Crossing – South at Holden.