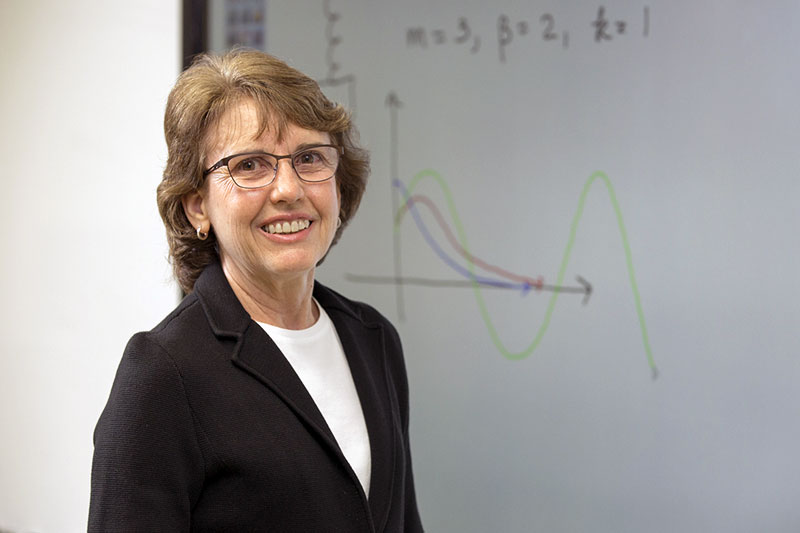 WARRENSBURG, MO – Rhonda McKee, a longtime University of Central Missouri faculty member who has contributed to the education of thousands of students who participated in UCM mathematics courses while also supporting the advancement of her profession, has received the top honor awarded annually by Kappa Mu Epsilon (KME) national mathematics honor society.

The presentation of the George Mach Distinguished Service Award took place in April during the 2019 KME National Convention in Frostburg, Maryland. Presented biennially, this award recognizes an individual who has served the society with distinction. It was established in honor of George Mach, Ph.D., who held a number of key leadership positions in KME, including serving as national vice president, president, past president, and secretary.

Individuals are selected for the award based on nominations that are solicited from KME chapters. The organization’s national council makes the award selection.

McKee has served UCM since 1984. She began teaching as a math instructor and climbed her way up the faculty ranks as an assistant, associate, and professor of mathematics, and has served as mathematics coordinator since 2012 in the School of Computer Science and Mathematics.

In addition to her work with UCM students, McKee has a strong record of involvement with KME, which includes leadership positions at the regional and national levels. She was initiated into the organization while studying as an undergraduate student at Missouri Southern State University in Joplin. When she joined the faculty at UCM, she became corresponding secretary for KME’s Missouri Beta chapter on campus.

McKee served as the North Central Regional Director of KME from 1999-2001, and at the national level, she served as secretary, 2001-2009. In 2009, she was named president-elect, and served in that capacity for four years until becoming president, a position she maintained until her four-year term ended in 2017.

“Kappa Mu Epsilon has been an important part of my mathematical career, beginning when I was a student and continuing as a faculty member,” McKee said. “It's a wonderful organization that promotes mathematics and provides opportunities for students. Over the years, the students in our chapter have benefited from the opportunity to present their research and see the research being done by students in other chapters, as well as from the friendships they have formed, at local meetings, and regional and national conventions. I'm very honored to receive this award from an organization that I have had the pleasure of being involved in for so many years.”

McKee and her colleagues have taken students to a regional or national convention each year since 1990. At the recent convention, Steve Shattuck, assistant professor of mathematics, was elected national secretary. Also during the event, Matthew Enlow, a UCM mathematics student, presented a paper that was named one of the four top papers.

To learn more about KME, visit the organization’s website at kappamuepsilon.org.