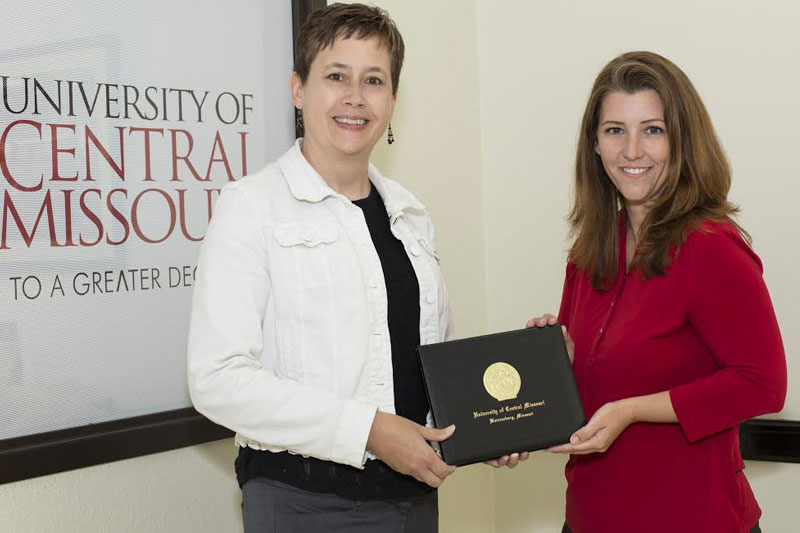 Linda Harris, left, designer in the University of Central Missouri Office of Integrated Marketing and Communications (IMC), receives the 2019 Foster/Inglish Award for Outstanding Achievement and Service in Public Relations from Kelly Waldram Cramer, director of IMC.

WARRENSBURG, MO – Linda Harris, a staff member described as someone who “truly exemplifies service to the University of Central Missouri, the Integrated Marketing and Communications (IMC) office and to students,” has received the 2019 Foster/Inglish Award for Outstanding Achievement and Service in Public Relations.

Harris, who resides in LaMonte, Missouri, joins a growing list of individuals who have received the award since the first presentation was made in 2001. The award was created in 2000 to honor achievement and service by members of the university’s Office of Public Relations, which today is named Integrated Marketing and Communications to reflect the multi-faceted communications responsibilities shared by staff members. John Inglish, university director emeritus of public relations, established an endowment through the UCM Alumni Foundation the year he retired to honor his longtime friend and mentor, Carl Foster, who retired as director emeritus of public relations in 1986 after 19 years of service to the university. Inglish devoted more than 27 years to UCM’s public relations office before he retired.

Kelly Waldram Cramer, IMC director, made the award presentation during a staff meeting on June 18.  She pointed out that the award recognizes achievement and service of regular, full-time members of the university’s PR (IMC) staff. Harris becomes the 17th person to receive the award since its inception.

In announcing the award recipient, Waldram Cramer said “collaborative, excellence, initiative, integrity and problem solver” are words that describe Harris and what makes her a highly valued member of the staff. She noted that Harris works on many different projects that serve clients across the university, and has particularly excelled in her efforts to help IMC with their acquisition of alumni communications. This includes her outstanding design work and other contributions to “UCM Magazine,” a publication that reaches thousands of university graduates.

“Linda played an integral role in the success of our alumni communications. She doesn’t shy away from operating outside of her job description and does so with a smile on her face,” Waldram Cramer said.

"I'm very honored and surprised to have received this award. I have the pleasure of working with a team of professionals who perform at a level of excellence that is second to none,” Harris said. “They make me better simply by being a part of their team, and I know what we do makes a difference in the lives of the students who we serve.”

She added, “It is a privilege to return to my alma mater where the faculty and staff have a genuine interest in each student's success. I'm thankful for the opportunity to help promote this campus and its programs to future students so they too can realize their dreams."

Harris and her husband, Shawn, are the parents of one son, Benjamin, 8. The Harris family is engaged in activities that support education, their local and surrounding communities, and their church.