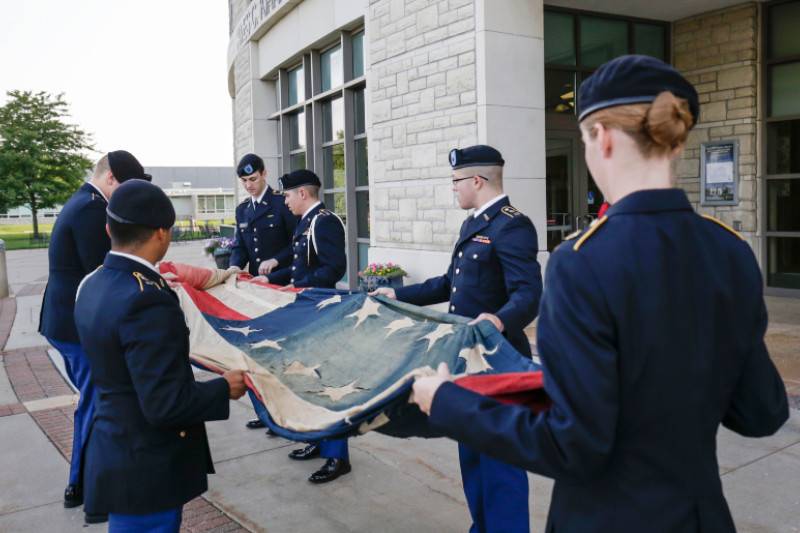 WARRENSBURG, MO – With help from University of Central Missouri’s Army ROTC cadets, the McClure Archives and University Museum is taking a step toward making an important artifact with ties to the Harry S Truman family available for public viewing.

The artifact is an 1877 United States flag that was donated to the school in 1948 by Fred Truman, who attended in 1932 what was then Central Missouri State Teachers College. The very fragile, historic flag measures 20 x 10-feet and has 38 stars, and was given to the donor by his uncle, former President Harry S Truman.  Research is still under way to learn more about the flag and its history, said Amber Clifford-Napoleone, director of the McClure Archives and University Museum and professor of anthropology.

“I’m working right now to find out where President Truman procured the 1877 flag,” she said, while also cautiously adding, its proportions are in line with the flags that typically fly over the U.S. capitol. She believes the flag was flown at least once over UCM, but the date and circumstances are still being researched.

Born in Lamar, Missouri, and having spent much of his life in Independence, Truman became the 33rd U.S. president April 12, 1945, after the death of former President Franklin D. Roosevelt. He served through 1953. Fred Truman eventually joined his uncle in Washington, D.C. Truman completed his famous Whistle Stop tour, which included a brief train stop in Warrensburg, the same year the flag was donated to the university.

Clifford-Napoleone said she plans to have the flag encased in a custom-made box with a clear covering so it can be observed by visitors of the McClure Archives and University Museum, located on the first floor of the James C. Kirkptatrick Library.

Before any efforts are taken to frame the flag, she wanted to ensure a proper retirement and folding in accordance with military protocol. Dressed in military uniforms, several cadets showed up the morning of Sept. 6 to properly fold the flag into a tri-corner shape, exposing only the blue field with stars. It was then presented to Clifford-Napoleone. She will now take steps to ensure it is enjoyed by members of the UCM campus and archives-museum visitors for generations to come.