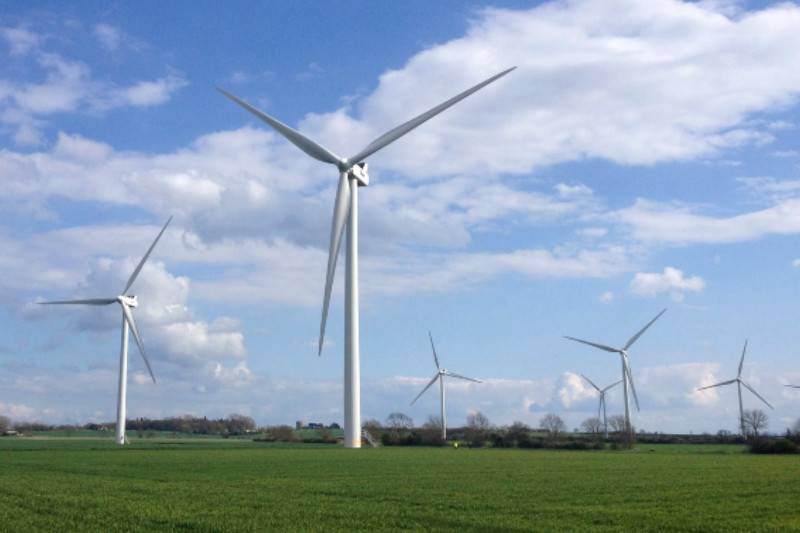 WARRENSBURG, MO - While Missouri still has a long way to go to tap into its full potential for using wind power as an energy source, a University of Central Missouri safety professor not only believes interest for electrical safety in this industry will increase, but he’s obtained federal funding to help train wind tower construction and maintenance employees.

Miaozong Wu, Ph.D., CSP, ARM, program coordinator of the Master of Science in Occupational Safety Management at UCM, has received a $75,000 award from the U.S. Department of Labor, Occupational Safety and Health Administration (OSHA) for a project that focuses on electrical safety in the wind energy industry. Funding was made possible through OSHA’s Susan Harwood Training Grant Program.

The project will enable Dr. Wu and his team to develop electrical safety training materials for employers and workers involved in wind farm construction and maintenance. This work will include unique materials related to new knowledge and properties of electric arc, and best practices in electric arc protection, which are not well reflected in current testing and safety consensus standards. Special attention will be given to the protective properties of specialized personal protective equipment for preventing worker injuries from exposure to electrical hazards. The project will also provide training opportunities and resources to youth, temporary, hard-to-reach workers, and employees who are new to the wind energy industry.

Dr. Wu, who is the project director, will have industry collaboration with electrical arc safety experts on the project. Mikhail Golovkov (www.ArcFlash-CRT.com), a senior member of the Institute of Electrical and Electronics Engineers (IEEE) and a former member of the Technical Committee 78 (TC78) of the International Electrotechnical Commission (IEC), has contributed to the development of live working and safety standards for various electrical technologies. Golovkov presented his research results in several IEEE’s Electrical Safety Workshops. Gavin Burdge, a Certified Safety Professional (CSP, CIH), has specialized experience in electrical safety from working under contract with the Department of Defense Electrical Safety Working Group. Burdge has previously collaborated with both Wu and Golovkov on different research projects that were published in the Professional Safety​ Journal.

“Pilot training will be delivered on the jobsite or at the University of Central Missouri, wherever convenient for trainees,” Dr. Wu said. Individuals who will receive training will be recruited primarily from workers who are employed at wind farms in Missouri, Kansas and surrounding states.

According to the grant proposal, the team expects to have two training sections in 2020 that will consist of six contact hours. Phase 1 takes place between April and June, followed by the second phase of training planned for July through September, 2020.

Dr. Wu said one of the primary reasons the team wanted to pursue this project is because wind provides a very sustainable energy resource. It is estimated that more than 114,000 U.S. workers have a career in wind energy, and employment will increase significantly over the next 10-20 years. Wind turbine service technicians in the U.S. are projected to grow 57 percent from 2018 to 2028, ranking as the second-fastest growing occupation, according to the U.S. Bureau of Labor Statistics (BLS).

“Unfortunately, workers in the wind energy industry and general electrical energy industry present great risks exposing themselves to electrical hazards ranging from kilowatts to megawatts of electric power. BLS data suggest an average of 150 workers were killed annually due to exposure to electricity from 2011 to 2017,” Dr. Wu said.

“Therefore, developing new electrical safety training and educational materials is significantly important for preventing worker electrical injuries, and significant for the financial interest to the business as well.”

Missouri has an average wind speed of 10 mph, which is higher than a number of surrounding states that utilize wind technology. This contributes to Wu’s belief that Missouri has an opportunity to maximize its potential to use wind as an energy resource. He noted that the American Wind Energy Association ranks Missouri only 21st for the installed wind capacity and 22nd among all states regarding the number of wind turbines. Less than 0.5 percent of land-based technical wind potential has been developed and utilized in Missouri.

Sarah Craig, director of Sponsored Programs and Research Integrity at UCM, congratulated Wu and his team for the award, saying, “This grant will further our partnerships with industries and field experts, increase the university’s development and training capabilities, and support both our educational mission and regional economic development.”

Individuals who are interested in learning more about this project, including how to participate in training opportunities, are encouraged to contact Miaozong Wu at miawu@ucmo.edu​.