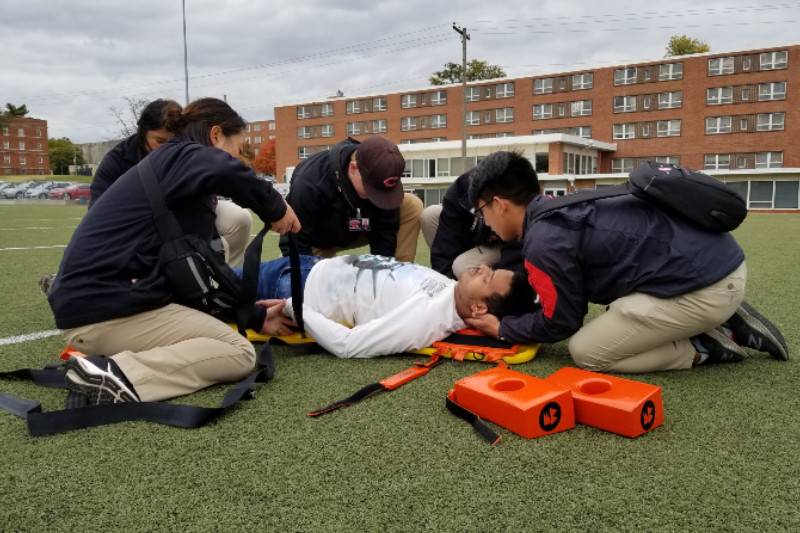 In an exercise that involved a collaboration between two academic disciplines, students from the Athletic Training program provided assistance to a student from the Crisis and Disaster Management program who was part of a simulated disaster event at East Field on the University of Central Missouri campus.

WARRENSBURG, MO – Taking lessons learned from incidents such as the 2013 bombing at the Boston Marathon, a collaborative disaster simulation at the University of Central Missouri this week brought together students and faculty in the Athletic Training and Crisis and Disaster Management programs.

The exercise took place Monday, Oct. 21 at UCM’s East Field under the leadership of Dianna Bryant, associate professor of crisis and disaster management, and Greg Williams, instructor of athletic training. Representatives of Johnson County Emergency Management added a realistic touch to the exercise by bringing to campus their mobile command unit.

Williams said he wanted to provide an inter-professional education opportunity for his students, so he reached out to Bryant to consider working together to create a learning experience designed to prepare athletic training students to deal with an emergency situation. He noted that his students already had experience engaging with other academic disciplines.

“We’ve done some things with speech-language-pathology and dietetics, but we are trying to think outside the box about other things that would be appropriate for our students that would allow them to interact with other professionals. In the real world, you don’t act in a silo or bubble, even in the world of athletic training,” Williams said.

He cited that during the Boston Marathon bombing, athletic trainers who were waiting at the finish line were among the first to administer aid to injured individuals.

“These are situations we hope our students never encounter, but we wanted them to get the experience of what it might be like to respond to something like this – to be out of their comfort zone but also being within the scope of what they can do.”

The simulation developed between the two educators related to violence that erupted between two rival groups at the end of a soccer match, resulting in injuries to four players. In this scenario, a call was made to local law enforcement agencies and Johnson County ambulance, but the athletic trainers had to step in to administer medical assistance while emergency help was en route to the scene of the incident at East Field.

“There’s always four or five minutes before emergency people show up, so we’re trying to give them some experience in how they would play a role in the incident,” Bryant said. She noted the athletic trainers would have experience in working with individuals who are injured, and they could employ those skills as the first people on the scene.

CDM students represented the team, facility and law enforcement to establish an Incident Command Center. Johnson County Emergency Management brought to campus their 20-foot-long-mobile command unit, equipped with various work stations, communication and resource materials, to support the event. They provided tours of the mobile facility to all of the student participants once the simulation was over.

Troy Armstrong, director for Johnson County Emergency Management, said this was a good opportunity to show students equipment that can be used in an actual incident to communicate with an Emergency Operations Center. It was also an opportunity to foster more relationships with the university and its personnel to help prepare for different types of emergency management situations.

“If we can build those relationships pre-disaster it is important because when something actually happens that’s not the first time we want to see someone’s face,” Armstrong said.

Suhail Alameri, a crisis and disaster management student from the United Arab Emirates served as in a security role during the simulation. He said the experience was beneficial because it helped him “learn how to organize and what to do to plan for an emergency.”

Kyleigh Moorer, athletic training student from Lee’s Summit, Mo., added, “I’d say it will prepare us better for the future, but it will also help us in being able to discuss with our future safety management and people who are in charge of getting us the things we need in these types of incidents.”

Other students commented on the value of learning about different resources they would need in a future situation, and most of all, the importance of strong communication.

Williams said the students planned to meet with their instructors after the exercise to discuss what they learned, including what worked, and what they would do to improve response during an actual incident.

“I think we did well, but we have lots to learn,” he remarked.