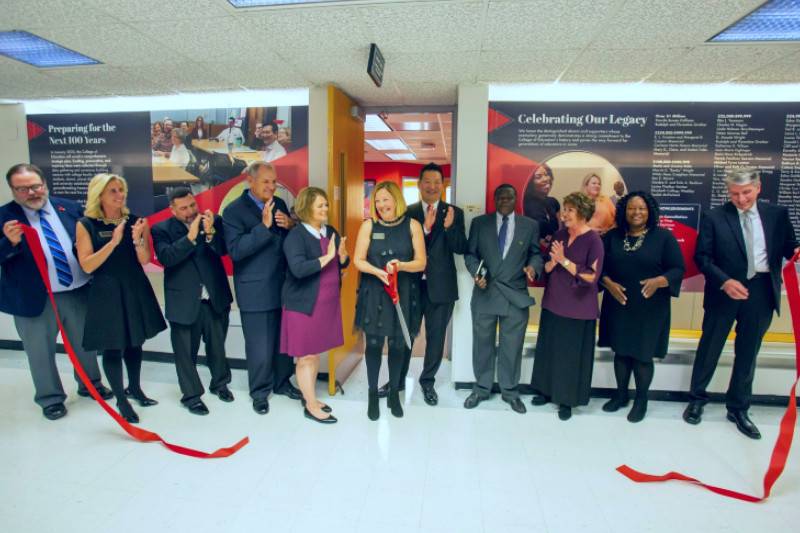 WARRENSBURG, MO – Showcasing the quality of alumni who have earned degrees from the University of Central Missouri College of Education, six individuals who have distinguished themselves as educators at many different levels were honored by their alma mater Oct. 25. Recognition took place as the college celebrated its 100-year anniversary at UCM.

Recipients of the college’s first Legacy Alumni Awards are Thomas Goddard, Lake Tapawingo; Morris Collins and Deborah Orr, Warrensburg; Kim Spencer, Harrisonville; Eduardo Mendez, Kansas City, Kan.: and Gift Alfred Bwerakumanda Dube, Mzuzu, Malawi, Africa. These individuals were honored during the Legacy Alumni Dinner, immediately following their participation in an afternoon ribbon cutting ceremony to commemorate the opening of the COE’s new Legacy Suite. Located on the second floor of the Lovinger Education Building, this area covers both sides of the hallway, and is adorned in graphic panels depicting the college, past, present and future. It also includes a room with comfortable seating and office space decorated in UCM colors and memorabilia as a place where alumni can relax and gather during their visits to campus.

“This Legacy Suite and the installation of this historical tribute to our college’s rich history, which we dedicate today, was conceived from the notion that we need to embrace our past and our roots. We should take time to celebrate our accomplishments, but let us not rest on our laurels,” said College Dean Robert Lee. “Let us prepare to forge ahead so that those who follow us may have reason and occasion to celebrate the next 100 years.”

Dean Lee added that those present are standing together as a community in a space “to affirm the legacy of our alumni with a commitment to reach out and build new partnerships and position ourselves for the start of a new decade in 2020.”

The College of Education’s history dates back to the naming of the university as Central Missouri State Teachers College in 1919. The university has been preparing teachers since the institution opened in 1871 as a state normal school, and today continues to be a leader in teacher education with graduates serving throughout the state of Missouri and beyond.

The dinner included a presentation about the COE strategic plan for the future. Those attending had an opportunity to learn more about each of the Legacy Alumni, whose accomplishments are as follows: 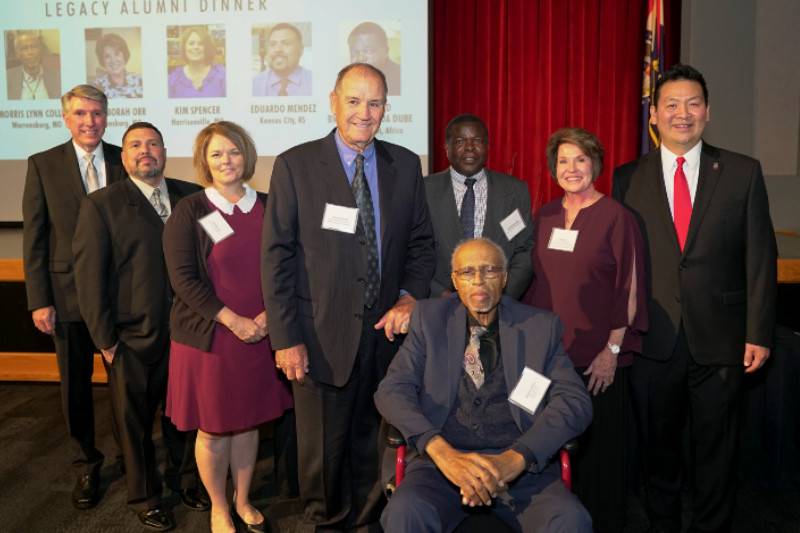 Thomas Goddard earned both a bachelor’s and a master’s degree in education from UCM with a physical education emphasis in 1961 and 1964, respectively.  He hails from a long line of teachers and UCM alumni, starting with an aunt who attended Central Missouri State Teachers College in 1927, followed by his mother in 1929.

Goddard has taught and coached basketball at Warrensburg Junior High School, Windsor High School and Raytown High School, where he led the team to the Missouri State Final Four. He retired from his 35-year education career in 2003 after serving as activities director for Blue Springs R-4 School District. Since his retirement, Goddard has served as a member of the UCM Alumni Foundation Board of Directors and is currently mayor of the City of Lake Tapawingo.

Morris Collins was a first-generation student at UCM, earning both a bachelor’s and a master’s degree in art education in 1969 and 1973, respectively.
Upon graduation, Collins became the first African-American teacher in the Warrensburg school system. Throughout his career he taught at the elementary, middle and high school levels. After retiring from public school in 2002, he returned to his alma mater as an art instructor at UCM.

Collins continues to serve on the Warrensburg School Board, a seat he has held for 15 years, twice serving as board president. He also has been a member of the board of directors for the Missouri School Boards’ Association, and in 2012 became the senior pastor of Jesus Saves Pentecostal Church in Warrensburg, which his father founded.

Deborah Orr has earned four degrees from UCM: a bachelor’s and master’s in education in 1974 and 1989, an education specialist degree in school administration in 2001, and a doctorate in educational leadership in 2007.

Throughout more than four decades in education, Orr served as a STARR teacher, regional facilitator, principal and assistant director for the Central Regional Professional Development Center. She became superintendent for Warrensburg R-6 School District in 2006. Under her leadership, the district was Accredited with Distinction for seven years, passed bond and levy issues that provided funds for a new elementary school and additions to other buildings, and created two preschools.

Orr returned to her alma mater in 2012 to become an assistant professor in the early childhood and elementary teaching program, officially retiring in 2018.

Spencer did her student teaching in Harrisonville, which led to her first teaching positions. After five years as a fifth grade teacher, she moved to third grade as the school expanded. She spent the next eight years in this role and another nine teaching fourth grade.

Spencer returned to UCM to pursue an advanced degree in elementary mathematics, which led to teaching first through third grade math in a Title I school within the district. This year she received the prestigious Jedel Excellence in Mathematics Education Award and became the math specialist/interventionist in Lee’s Summit School District.

Mendez grew up in the Argentine community of Kansas as the first-generation American-born son of Mexican immigrant parents. He changed careers from the financial sector to education in order to make a positive influence in Kansas City’s Latino community. Mendez has served as a social studies teacher, at-risk coordinator and principal at Guadalupe Centers High School, transitioning the school from an alternative approach with low achievement to a college preparatory curriculum with high expectations and results. Today he is the director of Student Services in the Guadalupe Centers Schools district office.

Mendez has served on UCM’s College of Education Advisory Committee and is currently the liaison for the KC Teacher Education Collaborative.

When Dube found that Mzuzu University needed a librarian to work with children in communities surrounding the campus, he enrolled in UCM’s Master of Science in Library Science and Information Services program and obtained a graduate assistantship. After returning home, Dube became assistant librarian responsible for children and outreach services and liaison librarian for the faculty of education.