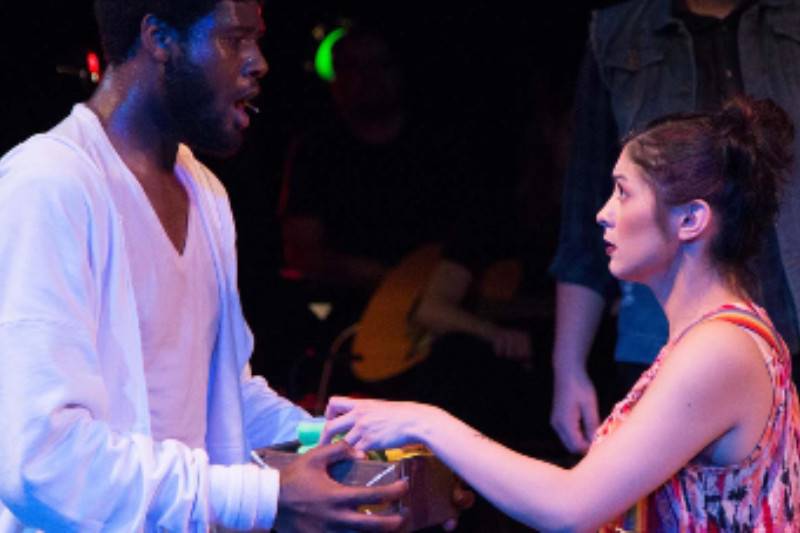 WARRENSBURG, MO –  University of Central Missouri Theatre and Dance will present a night of Studio Theatre one-act plays at 7:30 p.m. Nov. 14, 15, and 16 in the Black Box Theatre located on the first floor of Nickerson Hall. These one-acts are performed, directed, and designed entirely by UCM students. The one-act plays being presented are “Touch” by Briana Morgan, “The Other Room” by Ariadne Blayde and “Wash and Dry” by Shel Silverstein.

“Touch” is a one-act play set in a society where it is illegal to touch others due to the spread of disease. The story follows The Seeker, played by Danielle Sachse, as she discovers the human nature of physical affection and its need in life’s toughest moments. The Seeker is hesitant to rebel after growing up with a mother who is a formerly addicted to touch. The Seeker meets a hug Dealer, played by Taé Nickerson, and soon gains the confidence to push back. The Cured, played by Jade Seraaj, attempts to protect her daughter from needing an Enforcer, played by Luke Habjan. Along the way the seeker sees the desperation of addiction when she meets the Addict, played by Veronica Dervin. “Touch” is written by Briana Morgan and directed by Alley Pettey with technical design and technical direction by Kayla Gross.

“The Other Room” tells the story of Austin, played by Chasen Brown, who is a brilliant teenage astronomer who happens to have autism. Lily, played by Melanie Gratham, is his popular classmate who has an interest in astronomy. When a chance encounter after school leads to a growing connection between them, Austin’s imagination, intelligence, and constant struggles to connect with the world are revealed in the form of four characters, played by Kathryn Marshall, Demetruis Hampton, Ashton Bennett, and Derek Caswell, representing his inner life. Things take a turn when Lily’s boyfriend, Travis, played by Noah Bryan, enters the room. With turns both funny and heartbreaking, “The Other Room” is a compelling and sensitive glimpse into a unique and misunderstood mind.  “The Other Room” is written by Ariadne Blade and directed by Kayla Helms with technical design and technical direction by Kyle Yorg.

“Wash and Dry” is a comedic short play about a woman, Marianne, played by Molly Ross, who expects to do business at an independently owned laundromat. George’s Wash and Dry is owned by a kooky man named George, played by Nathan Endreshak. Marianne is surprised to find out that her clothes have never been washed, but rather “watched.” George teaches her the lesson of reading the fine print and a few life lessons along the way after accusing her of certain lifestyles based on her dirty laundry. Marianne isn’t the only one who ends up being fooled by George’s (not so) false advertising. Kenneth, played by Dalton Grafton, ends up doing his laundry business with George as well. “Wash and Dry” is written by Shel Silverstein and directed by Tanis Ham with technical design and technical direction by Molly Ehrnman.

The faculty advisors for these Studio productions are John Wilson and Ken George.

Tickets are $1 and are only available at the door. Due to the size of the space and limited seating, arriving at least 30 minutes in advance is strongly recommended. Doors will open at 7 p.m. and the show will begin promptly at 7:30 p.m. For additional information, please contact UCM Theatre and Dance at
660-542-4020.