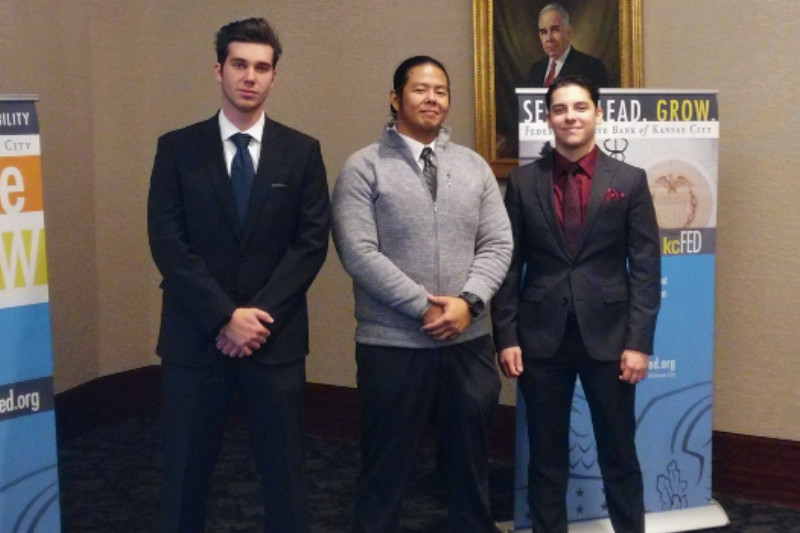 WARRENSBURG, MO – For the third consecutive year, a team from the University of Central Missouri placed in one of the top three positions at the annual Code-A-Thon hosted by the Federal Reserve Bank of Kansas City.

The UCM team known as the Fighting Mongooses captured second place in the event for their website titled “Binder.” Contributing to the high finish were team members: Demeitrius Huff, Peter Copus, Allen Anthes, Gabriel Martinez, and Marco Tordera. The Fighting Mongooses were one of two UCM teams that participated in the competition. The other team, the Fighting Mules, was comprised of students Grayson Kuyns, Jon Brockhorst, John Irle, and Nick Stamos. This was the fourth year for the Code-A-Thon in which UCM teams placed first and third in 2018 and first and second in 2018.

According to the Federal Reserve, the Code-A-Thon is a virtual event designed to encourage and inspire computer science and engineering students by providing a medium where they can work as a team to develop innovative solutions to real-life problems. These problems were presented by Kansas City Fed staff. Federal Reserve information technology professionals worked with community development advisors to determine the challenge for participating teams, which was focused on developing a tool to help entrepreneurs support their small businesses.

“I was truly amazed at the professionalism, the depth of thought the competitors put into the subject matter and the polish on these applications in less than 48 hours,” said Brian Faros, vice president and chief information officer at the Kansas City Federal Reserve.

Belinda Copus, an assistant professor of computer science who is also one of the faculty members who annually works with Code-A-Thon teams, the theme for this year’s event was “Fostering Entrepreneurship.” The competition began with the unveiling of the theme at 6 p.m. Friday, Oct. 25, and continued through the evening of Sunday, Nov. Oct. 27, giving teams of up to five students 48 hours to create a software application based on the theme. First round results were announced on Oct. 31, and determined which teams would advance as finalists.

“The Bank invited the top three teams from the initial submissions to their campus to make a final presentation on Thursday, Nov. 7. The Fighting Mongooses was selected for the final round,” Copus said.

The team developed a mobile phone application using a play on the popular online application known as “Tinder.” The students’ “Binder” application was designed to help bring talented workers together with employers who are seeking individuals with their skills and abilities and vice versa.

“Users set up accounts and then are able to search for potential matches,” Copus said. “The user can swipe left on a candidate that isn’t a good fit, and swipe right if there is a potential match. If both parties have swiped right on the other, a match is made and the users are informed of the mutual interest.”

Copus stressed that working within the competition timeline is truly a challenging effort that requires a cooperative spirit.

“The event always stretches our students. They have to quickly identify a product based on the theme and then get to work producing a prototype. Team members divide duties and often need to step out of their comfort zone to learn new skills or tools while creating their solution.”

“Not only does this teach us a thing or two about tech and working with people, but it builds camaraderie for everybody participating,” said Marco Tordera, a Fighting Mongooses team member, who had competed in the Code-A-Thon previously.

UCM computer science faculty and Office of Technology and operations staff also assist with this program, which is unlike anything students experience in the classroom. This very intense competition provides a weekend experience that provides a lifetime benefit for students as they prepare for the challenges and opportunities they will face transitioning into their professional careers.