Students Question About “Why Vote?’ Leads to Research, Action 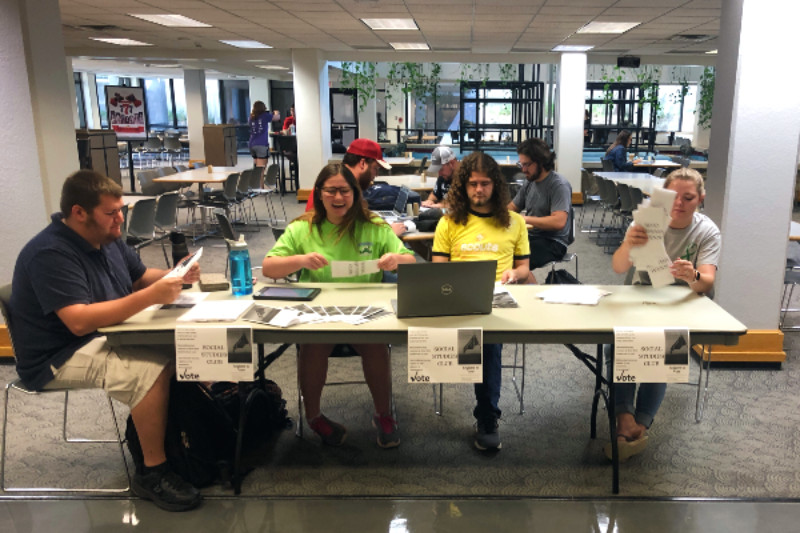 WARRENSBURG, MO – On their way to learning how to teach social studies to high school students, University of Central Missouri students this fall addressed the question “Why vote?” Their response led to a practical exercise in voter education and original research that may help increase other students’ participation in the voting process, particularly those who are far from home.

The students were part of the Social Studies Education course taught over two semesters by Star Nance, associate professor of education and social studies director at UCM. The course is inquiry-driven and uses what is known as a C3 framework to emphasize the acquisition and application of knowledge to prepare students for college, career and civic life.

The C3 model can be used in high schools to help address Common Core State Standards in social studies, Nance said. It is a learning process with four-dimensions, beginning with the development of questions and planning inquiries, followed by the application of tools that enable students to look at an issue through different lenses in areas such as civics, economics, geography and history. Two final dimensions include an evaluation and evidence collection process which can involve original research, the communication of findings and informed action.

“The focus is civic democratic education so that the students are showing high school students how to think for themselves, come up with solutions, and then act on those solutions,” Nance said.

McKenzie Stephens, a senior from St. Peters, Mo., who is seeking a bachelor’s degree in secondary education in social studies with a history minor, was part of the fall 2019 class. From initial discussions, she and her classmates launched a discussion early in the fall semester that ultimately led them to understand more about voting behavior.

“The first dimension is like the hook. It’s the bell ringer. For us, it was ‘Why vote?’ Every step that you do, you are always going to be looking back at that essential question,” she said about the learning experience. “It’s really important that we go through it and learn it ourselves, because that’s what we are going to be teaching.”

“We looked at statistics and a lot of demographics for people who vote, such as age groups, gender, sex, minorities, and figured out who is voting and who is not,” Stephens said. “So it gave us a basis to know who is participating and who isn’t. Based on that, we came up with a survey, and we focused on our age group – college students.”

Students in Nance’s class gathered more than 100 responses to a questionnaire they prepared.

“We asked students if they voted in the last election and why they voted or why not,” Stephens said. “We wanted to know how active people were in local elections. That happens to be the one people kind of neglect the most.”

“What we found based on our findings is that the number one issue with college-age students or peers is they weren’t in their hometown to vote,” she said, “so absentee voting was a problem.”

The students’ next step was to develop an action plan, which led them to locations on campus such as the Elliott Student Union. They distributed information to help students understand the absentee voting process.

“We made flyers that explained the absentee ballot system and where to go. We printed out absentee ballot request forms and had information at a table about elections in four areas,” Stephens said, “and we also had a computer set up to see if people were registered or not.”

Nance said this C3 project was led by 13 students. They will now have the opportunity to work with public school teachers who may not have experienced the C3 model. In the process, students also may be teaching seasoned teachers.

“It’s kind of a professional development for teachers they (student teachers) have been assigned to work with because most of them have never done it. I’ve had teachers latch on to them and say, ‘I want to do that,’ so they do it the next year. It does trickle down sometimes.”

While students such as Stephens appreciated the experience they gained through Nance’s course, other students have recently voiced their appreciation for her role as a faculty advisor, which has led to recognition at the state and national level.  During 2019, Nance received the National Academic Advising Association (NACADA) Certificate of Merit for Region 7 Excellence in Advising Award for a Faculty Advisor. It was an honor she received after previously being recognized with a Missouri Academic Advising Association Award.

“It was the greatest award to receive because if comes from the students,” Nance said. “I was excited to win at every level because it was validation from my colleagues that my style and philosophy of advising benefits every student in my program.”

Nicholas Metts, a senior social studies major, was one of two students who nominated her for the award. He called Nance an “asset to the university and to her students” and “a true role model.”

“My overall experience with advising has been phenomenal. Dr. Nance always goes above and beyond when helping me pick my classes for each semester. She ensures that I am in the best classes with the most outstanding professors on campus,” Metts said.

Nance has worked for UCM for seven years. Prior to joining the university, she was the Middle School Director at Fitchburg State University in Massachusetts, and a social studies teacher and counselor in public and private schools in Oklahoma.