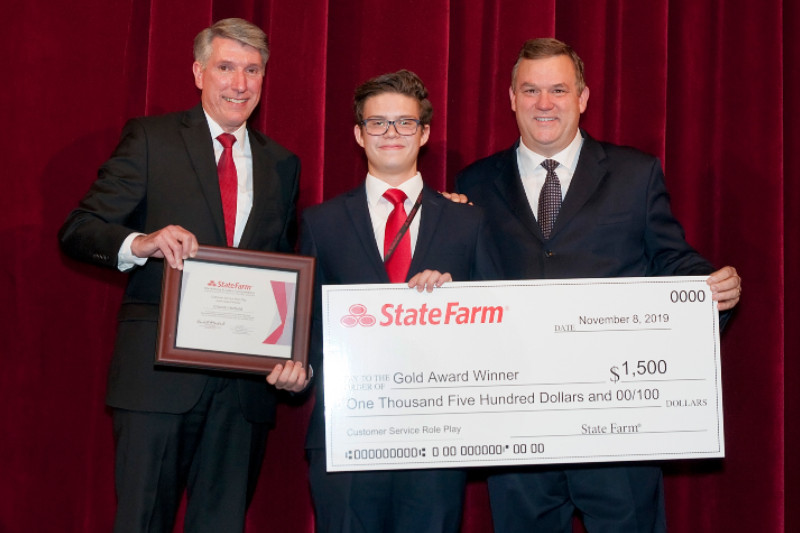 A University of Central Missouri marketing major from Union, Missouri, Orlando Hatfield, center, claimed the Gold Award in the Customer Service Role Play category of the State Fair Marketing and Sales Competition at UCM. With him for the presentation of a $1,500 check was Roger Best, UCM President, left, and Rand Harbert, a UCM alumnus who serves as executive vice president chief agency, sales and marketing officer for State Farm.

WARRENSBURG, MO – Orlando Hatfield, a marketing student from the University of Central Missouri, claimed the Gold Award in the Customer Service Role Play category at the 2019 State Farm Marketing and Sales Competition Friday, Nov. 8 at UCM.

Orlando Hatfield, who is from Union, Missouri, earned the recognition and $1,500 competing against teams from 11 schools from across the country.  He and his teammate, Logan Lee, a marketing major from Centerview, Missouri, also competed in the Sales Role Play and Marketing Presentation.  Each received $1,000 individual awards for participating in the competition.

The annual competition is hosted by the UCM Harmon College of Business and Professional Studies in cooperation with State Farm. Tyler Hirlinger, assistant professor of marketing who participated in the State Farm competition as a UCM undergraduate student, is adviser for the team.

“The State Farm Marketing and Sales Competition provides an opportunity for students to improve their marketing and sales skills, enabling them to better compete in the marketplace,” said Charlie Schwepker, Randall and Kelly Harbert Marketing Professor at UCM. “The competition instills confidence in students that they can compete with the best and brightest students from across the nation, as well as provides them with an opportunity to network with State Farm executives and employees, opening the door to potential future employment with State Farm.”

The Marketing Presentation category of the competition showcases student creativity as a team, entrepreneurial spirit and presentation skills. Individual team members also participate in the categories of Sales Role Play, which showcases a student’s personal selling skills in a real world scenario with young adult prospective auto insurance buyers, and Customer Service Role Play, which demonstrates a student’s ability to display skills in handling a challenging customer service scenario after the sale. The team with the highest combined score in all three categories receives a Team Award. 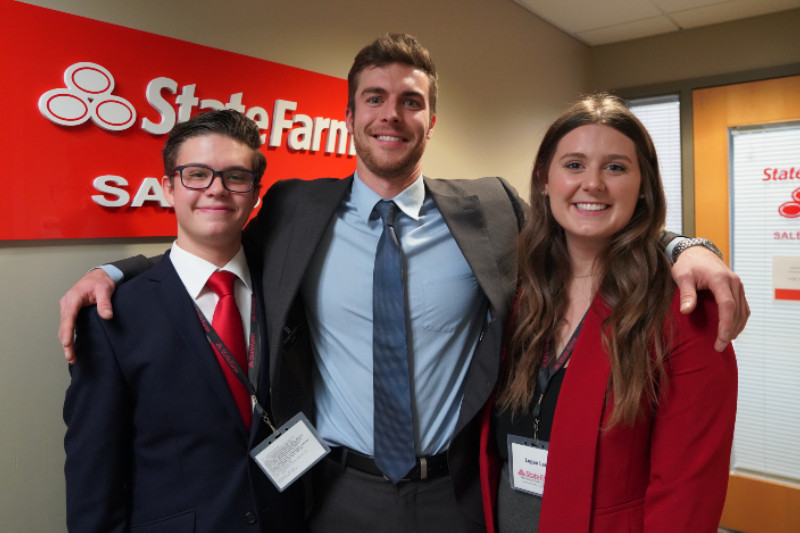 Teammates Orlando Hatfield, left, and Logan Lee, right, both marketing majors at the University of Central Missouri, participated in the annual State Farm Marketing and Sales Competition at UCM in which Hatfield claimed the Gold Award for Customer Service Role Play. With them is team advisor Tyler Hirlinger, an assistant professor of marketing who participated in the State Farm competition as a UCM undergraduate student.