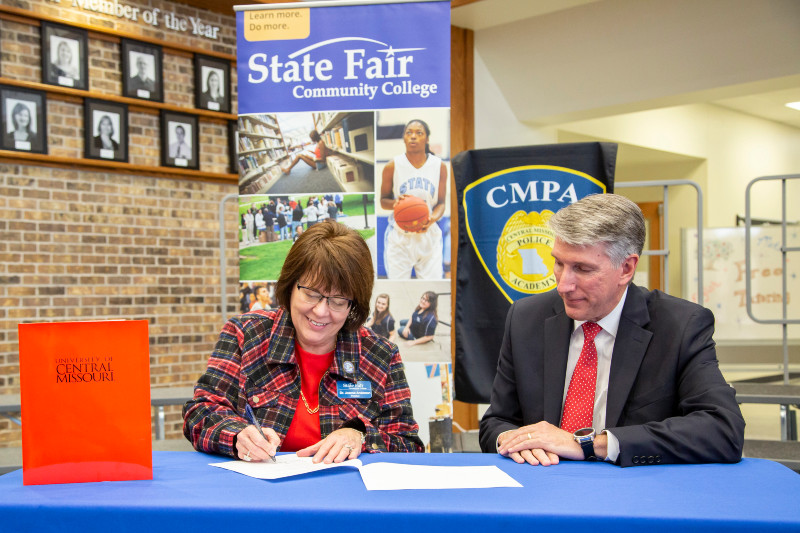 Joanna Anderson, president of State Fair Community College, and Roger Best, president of the University of Central Missouri, sign a Memorandum of Understanding to officially launch a new part-time basic law enforcement academy at SFCC beginning in January 2020. The program is in cooperation with the Central Missouri Police Academy, which is part of UCM’s Missouri Safety Center.

WARRENSBURG, MO – Touting the value of a partnership that provides much-needed training for local law enforcement personnel, top leaders at the University of Central Missouri and State Fair Community College (SFCC) on Dec. 5 ceremonially signed a Memorandum of Understanding (MOU) launching a new part-time police academy in Sedalia. The academy is already drawing interest from individuals beyond Pettis County.

Roger Best, UCM president, and Joanna Anderson, SFCC president, signed the MOU highlighting both institutions’ collaborative efforts to deliver the 18-credit-hour certificate program at SFCC. While the program will be offered in Sedalia, cadets will receive instruction through the Central Missouri Police Academy (CMPA), which is part of the Missouri Safety Center at UCM.

“Higher education is working really hard to build collaborations and partnerships, and its wonderful we have a partnership just 30 miles down the road, and you are bringing this program to our community,” Anderson said as she joined Best and other UCM-SFCC personnel at the Charles E. Yeater Learning Center to publicly announce the program.

Anderson stressed the value of providing an opportunity for local residents who want to work in law enforcement to receive training close to home. She thanked Best and his colleagues at UCM for their cooperation in making the program possible, adding that “maybe this is the first of many more things to come that are really designed to shorten the time to get students certified and to get them great jobs.”

Echoing Anderson’s sentiment, Best said, “Our primary goal is to serve the community through this piece of workforce development in an area that we know has a critical need. We know there are plenty of needs for police officers, and we hope to provide some of that supply. Doing so through a Missouri post-certified program will benefit not only the Sedalia Police Department and Pettis County Sheriff’s Department, but even beyond that.”

Tim Lowry, a retired Warrensburg Police Department officer who serves as director of the Central Missouri Police Academy, said he has already heard from 16 individuals who inquired about enrollment in the program, He said it is especially geared to individuals who have other daytime commitments, which may discourage them from pursing police officer training.

“They want to be in law enforcement, but things happen in their lives. They thought they were giving up this dream. This is providing that dream,” Lowry said.

According to Joanna Kurt-Hilditch, senior director of the Missouri Safety Center, the part-time basic academy was created with a goal to mirror the success of the full-time basic police academy at UCM. This new nine-month academy meets all the licensing requirements of the Missouri Peace Officer Standard and Training (POST) 600-hour  program. She added, however, “It goes beyond that with numerous supplemental classes and topics for new law enforcement officers to be prepared and competitive for a career in the field.”

The part-time basic academy begins in January 2020 at SFCC. Courses will be held Tuesday and Thursday evenings, Saturdays, and Sundays from January through September 2020. The program provides 18 hours of “free choice elective” college credit at UCM, which is the same as the full-time program.

One of the individuals who helped bring the program to fruition is James Cunningham, SFCC dean of academic affairs, who began a law enforcement career in Sedalia at age 21. He stressed the value of having a local program, particularly to serve those individuals who have families and may otherwise have to drive long distances for training. He noted his son, for example, drove from Sedalia to Jefferson City and back over a nine-month period for training.

“Over the course of nine months, he spent 300 hours on the road, whereas this would have given him more time to work and spend time with his family,” Cunningham remarked.

Cunningham said he is already hearing from individuals in places such as Clinton, Warsaw and Marshall, who want to be police officers, and are interested in this program.

Cendy Harrell-Carson, criminal justice program coordinator at SFCC, said she is pleased about the partnership with UCM, which is her alma mater. She remembers the challenges she faced finding time and convenient training when she entered what became a 25-year career in law enforcement in Sedalia.

“Life has changed. Our world has changed, and we need to have better trained law enforcement officers in the field, and this is going to happen…We’re excited and anxious to get started,” she told the gathering.

To learn more about the part-time basic academy, visit the CMPA website.