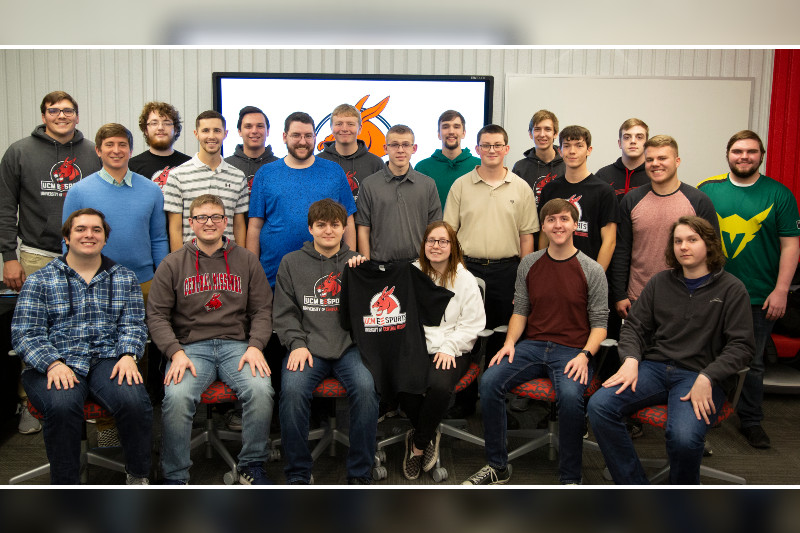 WARRENSBURG, MO – Meeting a growing level of interest in a highly competitive arena, the University of Central Missouri has signed 27 students to participate in UCM Esports for spring 2020. Students from many different academic disciplines turned out for the signing event in December to formally document their intention to join UCM Esports. All of these team members will each receive a $500 scholarship for the spring 2020 semester just for being selected to participate in esports.

Steven Shattuck, assistant professor in the School of Computer Science and Mathematics, organized and launched the university’s first-ever esports team during the fall 2019 semester. While getting this program off the ground was a learning experience, he said it was fun for all who participated, and interest is continually growing.

“We had hundreds of applicants, and that was just all in-house. We are now starting to get people applying from other places,” Shattuck said, noting that about 200 potential freshmen, nationwide, have expressed interest in enrolling at UCM in order to participate in esports.

The startup of UCM Esports took place on a small scale, but with expansion this spring, there is an opportunity to add more games which are of interest to team members. One team is selected for each of three different games.

Shattuck said the fall 2019 Overwatch team participated in a national collegiate tournament, but lost to DePaul University as it was making a run for the finals.

“We ended up going over .500 for the year, which is pretty good for a first team,” he said.

Shattuck added students who participate in UCM Esports are being challenged to do their best. Much like students involved in other collegiate sports, they are encouraged to study videos that will help them to learn more about their strengths and weaknesses, and how they can improve. Careful attention to player development will contribute to the team’s success in the future, he said.

“We had 15 team members last semester, and eight of them have returned. It’s not just about academics, because they have to have at least a 3.0 (grade point average), but we do look for improvement, because it’s a competitive team,” Shattuck said.

Shattuck noted that UCM was the second public university in Missouri to create its own esports team. Esports provides an opportunity for competitive, organized electronic gaming involving individuals who play the same popular games that they enjoy on their home systems. Competitions involving programs such as Overwatch, League of Legends and Rocket League can take place on campus, but at the highest level, this could mean arena-style play where participants can be watched in action via a streaming video service such as Twitch.

Similar to collegiate sports teams, which follow guidelines established by a member-led organization such as the National Collegiate Athletic Association (NCAA), esports also has its own organization to champion its growth and development on college campuses. With more than 100 participating schools, this group is the National Association of College Esports (NACE), headquartered in Kansas City, Missouri.