While Scholarships are Awarded, Audience Reminded MLK Dream Lives On 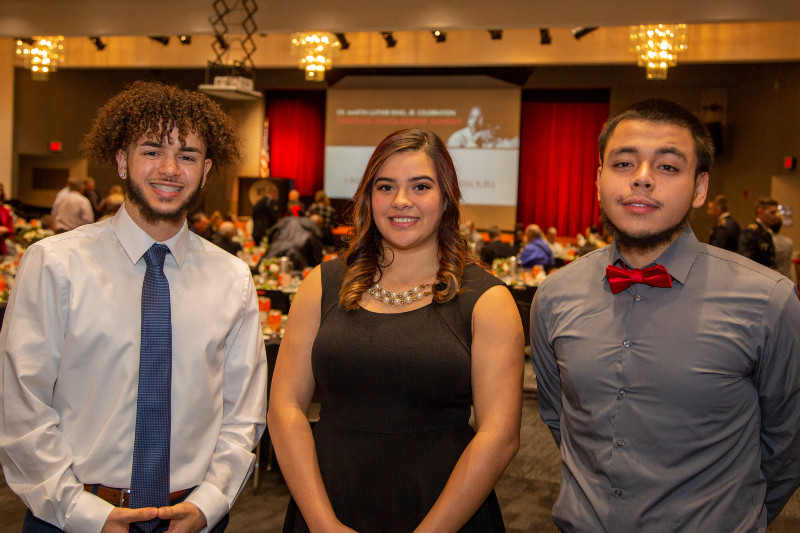 WARRENSBURG, MO – In honoring the legacy of Dr. Martin Luther King, Jr., members of the University of Central Missouri and the local community came together Jan. 22 to award scholarships to five UCM students at an event that also included recognition of local art students, and remarks from a UCM alumnus whose personal story demonstrates how King’s dream for others continues today.

Approximately 200 people attended the 2020 MLK Freedom Scholarship Dinner in the Elliott Student Union. The dinner was part of an annual celebration that was coordinated by a committee of campus and local community members under the direction of the UCM Center for Multiculturalism and Inclusivity. It takes place every January as an opportunity to pause and reflect on the work and impact of Dr. Martin Luther King, Jr., while also raising funds to help students with their education.

Since its inception, proceeds from the dinner have made possible approximately 200 scholarships through the UCM Alumni Foundation. Five students were honored in the 2019-2020 academic year with scholarships, and three of them were introduced at the dinner. Scholarship recipients who were recognized are Segrio Del Toro, Jr., a junior from Kansas City, Kansas, majoring in engineering technology; Adonis Knight, a sophomore from Olathe, Kansas, majoring in criminal justice; and Rocio Rodriguez, a sophomore from LaMonte, Missouri, majoring in nursing.  Two scholarship students were unable to attend the dinner, Allison Ratliff, an education major from St. Louis who graduated with a bachelor’s degree in December 2019, and Dominic Tiglao, a sophomore design and drafting major from St. Peters, Missouri. The scholarships are consistent with UCM’s efforts to make higher education more accessible, a topic Roger Best, UCM president, shared in his welcome remarks to the gathering.

“As you are fully aware, Dr. Martin Luther King, Jr. believed that the color of your skin should not dictate your opportunity. He and so many others worked very hard to ensure not just equal access to opportunity but equal access to equal opportunity,” Best said. “If you know anything about what we‘re doing here at the University of Central Missouri, we firmly believe that all of our students should have equal access to success.”

“We know that all of our students don’t come from the same starting point.” Best added. “Our goal, when we work with each of our students, is to ensure that we address where each of them start so that each of them has the opportunity to graduate. I see on a regular basis, if our students come to us and we admit them and they are working hard, we’re going to work equally hard to ensure that they are successful. And so, in that small way, we are hoping that we are continuing the legacy of Dr. Martin Luther King and so many others to ensure equal access to equal opportunity.”

Also during the ceremony, there was a tribute to Morris Collins, a longtime Warrensburg art educator who also taught in retirement at UCM. Collins passed away in 2019. His memory was honored through a youth essay/art exhibition, with winning entries on display at the dinner. Certificates recognized top entries considered from K-12 students from the Warrensburg R-VI School District: Skyler Ryberg, Jaina Lockard, Alina Perkins and Kailee Gatiss; and Whiteman Air Force Base Elementary School student Madelyn Gutierrez. 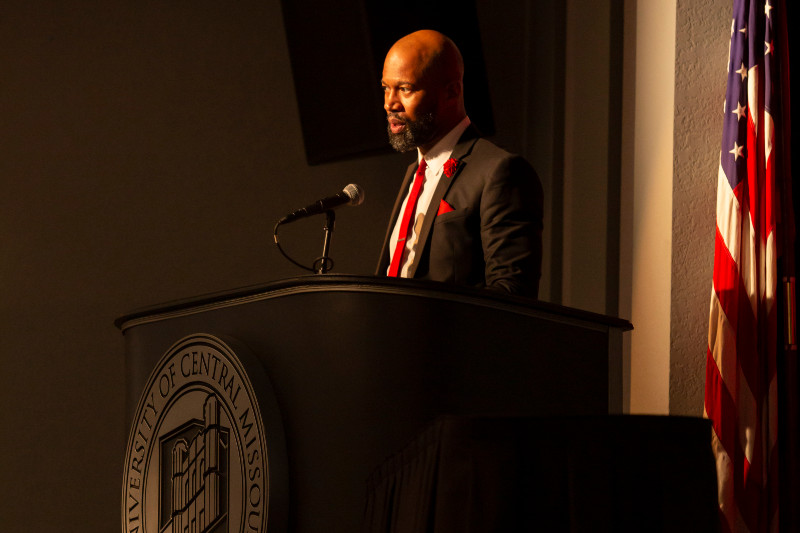 Author, journalist, and public speaker Toriano Porter provided the keynote remarks. After growing up in south St. Louis, Missouri, he went on to graduate in 1999 from UCM, then known as Central Missouri State University, with a bachelor’s degree in journalism and a minor in creative writing. Today he is a published author and serves as an opinion writer and member of The Kansas City Star editorial board. Porter is living out his dream to be a writer and journalist after a rocky start toward the college education he needed to help him launch a professional career.

“A little over 25 years ago, administrators at the University of Central Missouri made the decision to send me home. Technically, I flunked out,” he told the gathering. “To be honest with you guys, I definitely deserved to be expelled. So, today I came back, and I want to give a message to everyone in the room: the dream does live on.”

Porter became the first member of his family to pursue a college degree. As he related his personal story, he cited a quote from King that has provided him inspiration: “If you can’t fly, then run. If you can’t run, then walk. If you can’t walk, then crawl, but whatever you do, you have to keep moving forward.”

For him, moving forward has come with many tough life lessons, which also translated into valuable learning experiences. In 1992, he came to UCM on a football scholarship. While it should have been a time of great pride and excitement, he was disappointed because his hope for landing a football scholarship to play for a Division I school did not materialize.

“What I learned is that you don’t always get what you want,” he said. Porter added that because he didn’t value his scholarship, and didn’t follow through on success measures such as regular class attendance, he lost the scholarship by the end of his first year in school.

Another attempt to pursue his college education failed, but after much “soul-searching,” Porter returned to UCM in 1995, where his life began to change. By the 1996-1997 academic year he was on the Mules playing field serving as team captain. As a Division II player with a dream to play for the National Football League, he was the second leading tackle on the Mules with numerous other accomplishments. Although he never made it to the NFL, today he credits the influence of Mules football coaches such as Terry Noland, Willie Fritz; Walt Hicklin, who was then overseeing the student retention program; Defensive Coordinator Jeff Floyd, and Athletic Director Jerry Hughes for roles they played in supporting, motivating, and inspiring him to succeed on and off the field in pursuit of his college education.

During his MLK presentation, Porter also introduced and thanked Professor Emeritus Rose Marie Kinder for helping to nurture and fuel his passion for writing. As Porter recalled, he and his former creative writing teacher got off to a rough start regarding some of his early writing assignments. But Kinder saw promise in his writing of short stories about the people and situations he encountered while growing up in St. Louis.

“She absolutely, positively changed my life,” Porter said about Kinder. “She said to me, the ‘stories you tell are raw. They are real, but let the narrator use the cool reflective voice. Let your characters do all the slang talk and cursing, all of that. It changed my whole creative writing game, and I just thank her for taking time to teach me how to be a creative writer.”

Kinder wrote the forward to Porter’s first published book, “The Pride of Park Avenue.” He went on to publish a second book, a novel, titled “James Cool,” and has a third book coming out this year, “The Plain Ugly Truth,” which is a collection of personal essays. Porter’s writing/journalism experience also includes working for the Independence Examiner and the Lee’s Summit Journal.