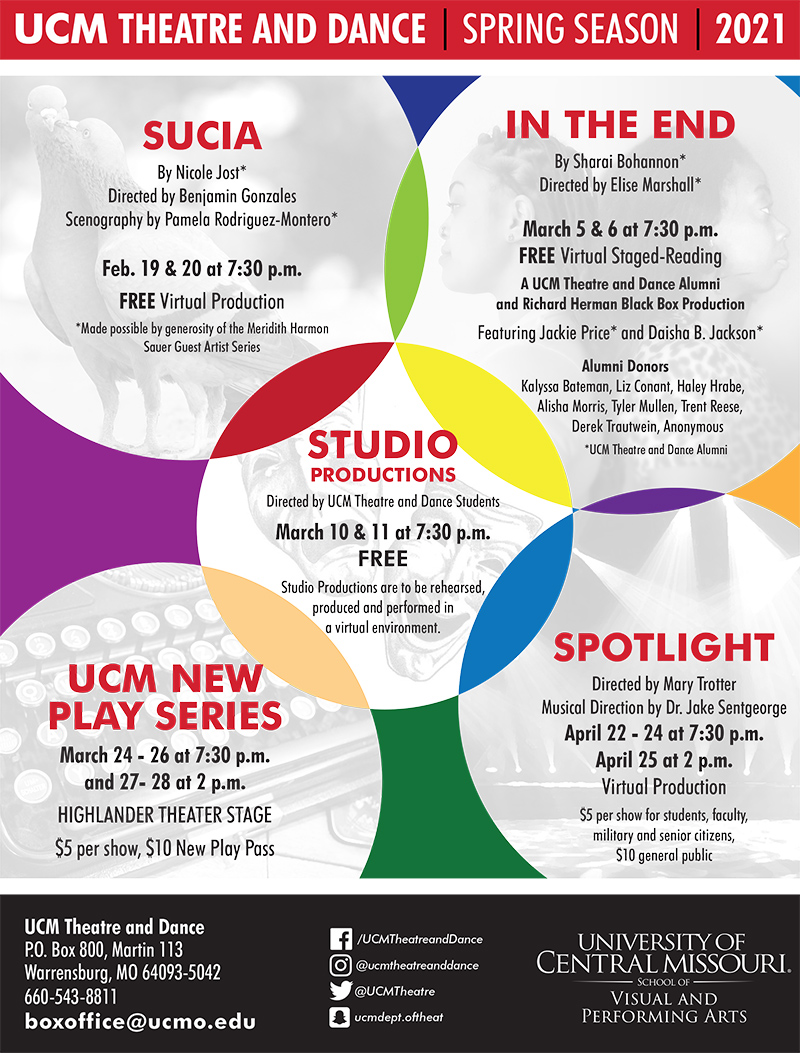 WARRENSBURG, MO – University of Central Missouri Theatre and Dance will present its Spring 2021 Mainstage season, consisting of “Sucia,” “In the End,” the UCM Theatre and Dance New Play Series, and “Spotlight.”

The first production of the spring Mainstage season is “Sucia,” written by Nicole Jost and directed by Benjamin Gonzales. In this nationally recognized new play, a motherless Chicana girl, known only as “Sucia,” becomes the backbone of a new family in this fairy tale of magical realism. Despite dire financial straits and the demands of her domestic life, Sucia dares to chase her Ivy League dreams. With a brilliant blend of Spanish and English, this is a Cinderella story for 21st century girls who aren’t afraid to get their hands “dirty.” Bonus: there are talking pigeons. Performances will be streamed virtually Feb. 19-21.

“In the End,” written by UCM alumna Sharai Bohannon and directed by UCM alumna Elise Marshall, will be produced by UCM Theatre and Dance Alumni in conjunction with the Richard Herman Black Box Program. In the play, Emmy and Bridget continually cross paths during the worst of times. Both are on separate missions in a city where violence runs rampant. Emmy deviates from her usual routine of comforting dying people to spend more time among the humans and to try to inspire them to get off of their predetermined course. Meanwhile, Bridget races the clock to find her missing sister hoping that she can still be brought home alive. “In the End” is a play that tries to make sense out of senseless death and provide some small comfort to those who grieve the fallen. The show features a virtual staged reading available via live streaming March 5-6.

Next, UCM students will present their Studio Productions. Studio Productions are a series of short plays directed and technically directed by UCM Theatre and Dance students. A night of many stories, this is not to be missed. Studio productions will be streamed virtually, March 10-11.

The inaugural UCM Theatre and Dance New Play Series will follow the Studio Productions. This performance of all new works, written by UCM students and faculty, is the first time a new play festival has been presented as part of the Mainstage season. The production will feature live staged readings of new plays over the course of five days. Talk-backs will take place after each show so the audience can participate in the development of the plays. Performances will take place March 24-28 on the James L Highlander Theatre stage. Masks and social-distancing will be required. Tickets will cost $5 per show or $10 for a Play Pass to see all the plays over the five-day period.

“Spotlight,” directed by Mary Trotter, will close out the Spring 2021 Mainstage season. UCM Theatre and Dance students take you on a theatrical journey of personal artistry as they select and perform monologues, musical numbers, and dances that reflect their aesthetic. An exploration of what it means to be a young theatre artist in spring of the year 2021, audiences get to share in a celebration of the young people who are the heart and soul of UCM Theatre and Dance. The show will stream virtually April 22-25 and tickets will be $5 for students, faculty, staff, seniors and military and $10 for the general public.