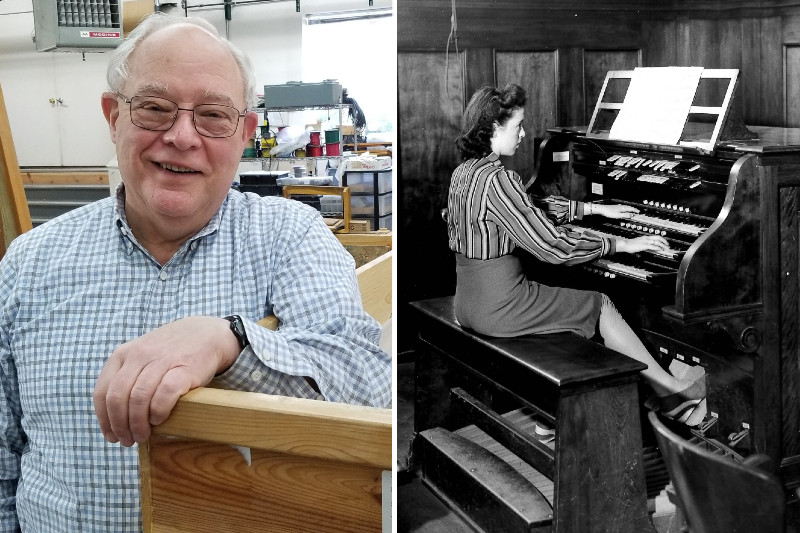 Often playing the pipe organ in Hendricks Hall, Eleanor Shockey (right) was a great teacher and mentor to Mike Quimby (left), a University of Central Missouri alumnus who plans to restore the 1924 vintage organ as a gift to UCM in memory of the educator and organist who inspired him.

WARRENSBURG, MO – Showing his appreciation for a former music teacher whose positive impact was never forgotten, Warrensburg resident Michael Quimby is honoring the memory of Professor Eleanor Shockey by restoring the pipe organ she once played at the University of Central Missouri. The owner of Quimby Pipe Organ Inc. is beginning the three-year project to breathe new life and enhance the Hendricks Hall pipe organ the same year he celebrates a company milestone.

Quimby founded his firm in 1970 while attending what was then known as Central Missouri State University. He studied vocal music under Shockey while earning his bachelor’s degree in 1973 and his master’s in 1975, both in music.

“I had many teachers, but as far as a teacher who prepared me for what the real world was like after graduation, she provided the most insight,” Quimby said. “She was a very multifaceted musician. She was a singer and a pianist who could sight-read anything. She was an organist, and a great lady.”

Restoration of the organ allows Quimby to show his gratitude for a great teacher and mentor, and it is also an opportunity to preserve an important piece of university history. The bulky instrument, designed with the pipes intentionally hidden from public view, was built by the Austin Organ Company in Texas, and was purchased by private gifts at a cost of $11,000. It was presented as a memorial to soldiers who died in World War I, and was officially dedicated in a ceremony that took place Jan. 19, 1924.

Quimby said his goal is to “refurbish the organ, enlarging and changing its character so that it will be an instrument capable of doing great organ and orchestral works.” He added that his plan for restoration will actually make the organ better than it was brand new. When finished it will be an instrument with the style and signature sound that distinguishes Quimby pipe organs from those built by other companies.

Michael Sawyer, dean of the College of Arts, Humanities, and Social Sciences, expressed his thanks for Quimby’s gift, noting that the pipe organ restoration project complements other efforts to improve Hendricks Hall as a venue for campus music and theater events.

“Michael Quimby’s generous gift marks an important landmark in the Hendricks Hall restoration and will be an integral component of the larger project,” Sawyer said. “We will hold celebratory events when the organ restoration is finalized. We have already laid new carpet and plan to undertake the next phase of the project, restoring the ornate ceiling and improving acoustics, once our current multi-year donor pledges mature and we attract the remaining needed private and grant dollars to complete this first major step. The community has been very supportive and generous, and we are honored to have the opportunity to return this historic venue to its former splendor.”

Quimby and his restoration team brings plenty of experience to the UCM project. From humble beginnings as a small tuning and maintenance firm, Quimby Pipe Organ Inc. has blossomed into a nationally known company. It employs approximately 10 individuals, including craftsmen working in areas such as woodshop, console design, voicing, pipe making, and general production. With the exception of solid state components such as keyboards, these employees make most of the organ parts by hand at the Warrensburg shop.

“We call this place a little family,” Quimby said about the collaborative environment at his business. “They work like a family together, and we take care of them.”

Quimby Pipe Organ Inc. engages in projects worldwide involving organs of various vintages, some dating back to the 1920s and even 1800s. From the firm’s first organ build, Opus 1, an instrument created for the First Christian Church in Warrensburg in 1973, they most recently finished building their 76th instrument, a pipe organ that was installed at the Dunwoody United Methodist Church in Dunwoody, Georgia. Among a growing list of projects are newly built organs at the Cathedral at St. Paul in Minnesota, St. Paul’s Cathedral in San Diego, Fourth Presbyterian Church in Chicago, and the First United Methodist Church, Athens, Georgia. This is in addition to a vast number of pipe organ refurbish and rebuild projects, including the organ at Grace and Holy Trinity Cathedral in Kansas City and the Cathedral at St. John the Divine in New York City, which has a pipe case that is five stories tall.

Quimby said his appreciation for pipe organs dates back to his childhood. He remembers “pestering” his father, securing books from the library at Oklahoma State University on the subject, after getting his first look inside one of the large instruments. “Magic” is how he described the experience – a feeling that sticks with him 50 years after launching his pipe organ business.

Individuals who would like to know more about the organ project or how they can support the Hendricks Hall restoration may contact Michael Sawyer at 660-543-4750 or msawyer@ucmo.edu.