Jensen Honored Through Governor’s Award for Excellence in Education 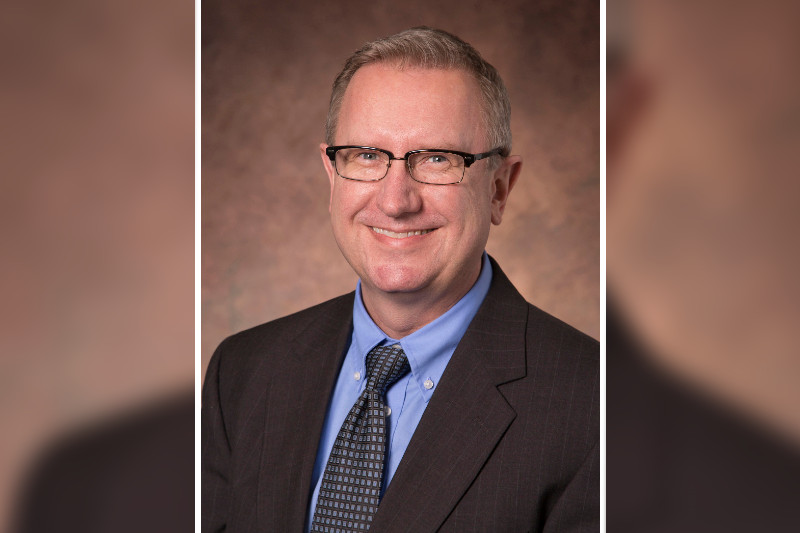 WARRENSBURG, MO – Described by colleagues as a caring teacher, mentor and coach who strives to provide his students with real-world experience, Dan Jensen, Ed.D., is the University of Central Missouri’s 2020 recipient of the Missouri Governor’s Award for Excellence in Education.

The Governor’s Award is an annual recognition initiative established by the Missouri Coordinating Board for Higher Education. In recognizing honorees, the awards program considers criteria such as effective teaching, effective advising, innovative course design and delivery, service to the university community, commitment to high standards of excellence and success in nurturing student achievement.

Jensen is an associate professor of management in UCM’s Harmon College of Business and Professional Studies, where he coordinates the Entrepreneurship and Social Enterprise (ESE) Program and was recently named MBA Director. He joins award recipients selected from each of Missouri’s public higher education institutions. The award selection at UCM was based on nominations submitted to a committee appointed by Philip Bridgmon, provost and vice president for academic affairs.

Jensen arrived at UCM in 2014 after working for Rockhurst University in Kansas City as an adjunct and full-time faculty member from 2002-2014. His professional career also includes working as a researcher on rapid-growth entrepreneurship at the Ewing Marion Kauffman Foundation, as well as consulting for ESI International, a global training firm, where he facilitated learning experiences for the Fuji-Xerox Leadership Institute in Japan. His engagement with ESI also took him across the United States to work for Cisco Systems, MetLife, NATO, the U.S. Department of Defense, the Federal Bureau of Investigation, and other major corporations, nonprofits and governmental agencies.

During the past five years at UCM, Jensen has integrated a number of practices into his teaching that have impacted the way students respond to him, and the way he feels about being in the classroom. This includes team-based learning, experiential learning, flipped classroom, and the integration of extracurricular activities into the classroom.

Jensen joined the Harmon College of Business and Professional Studies in the role as administrative coordinator and instructor for the Entrepreneurship and Social Enterprise major. Recognizing the need for entrepreneurship students to have outside-the-classroom experiences to enhance learning, he garnered support from the college dean and the management department chair to establish UCM’s Big idea Program in fall 2016. The initial program consisted of a day-long conference, which brought high-caliber regional entrepreneurs and business professionals to campus to mentor students. This event has since expanded into the monthly Big Idea Speaker Series, sponsored by the Blaine Whitworth Foundation; the Big Idea Pitch Competition each fall, and the Big Idea Business Plan Competition in the spring.

Mary McCord, professor in the Harmon College, was among those who submitted letters supporting Jensen’s nomination for the award. She praised his commitment to being an outstanding teacher.

”Dr. Jensen holds himself, his colleagues and his students to high standards. He is creative, efficacious, and spends many hours implementing innovative and effective teaching practices. His courses have high standards and students know he genuinely cares for their future and appreciate the steps he takes to help them achieve those standards.”

Jensen has also been active in service at UCM on many different fronts. Among such efforts, he served on the School of Business Administration’s (SoBA) Strategic Planning Committee, he has worked as an advisor for the UCM Collegiate DECA Team, and with the loss of the Small Business and Technology Development Center in 2017, he has increasingly become a resource for aspiring entrepreneurs. Additionally, he has led the UCM Strategic Enrollment Management Task Force with the goal of engaging and aligning all members of the campus community in operationalizing their enrollment management plans and sharing best practices. In his letter to the nominating committee, Jensen spoke about his dedication to UCM and its students -- aspirations which align with his selection.

‘When I arrived on campus in fall 2014, I knew that I had found my home.” Jensen said. “I have worked in higher education for more than 20 years, but the opportunities afforded to me at UCM have been unparalleled. My obligation is to make UCM as good an institution as it can possibly be. I choose to focus my tangible support in changing the lives of students, improving the working environment of colleagues, and creating opportunities for UCM to continue to thrive for many years.”