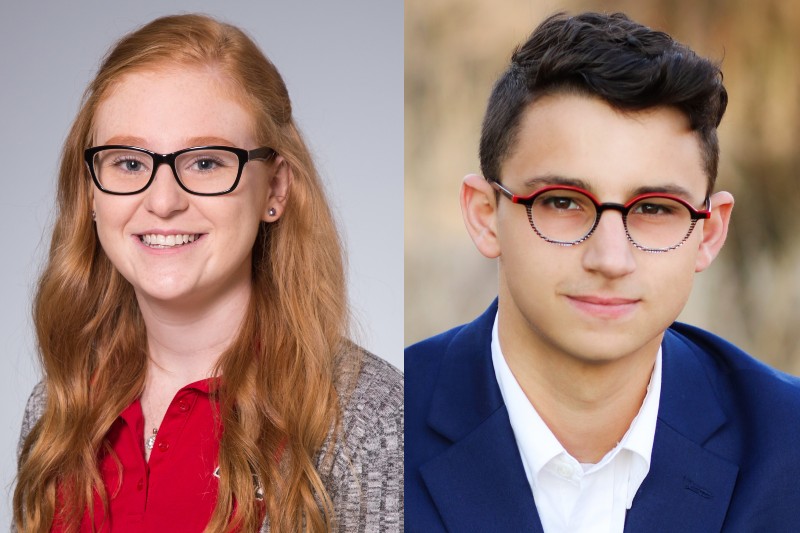 WARRENSBURG, MO – The Charno Award, the highest honor presented to both a male and a female graduating senior at the University of Central Missouri, has been awarded to Cole Fine, Olathe, Kansas, and Hannah Breedlove, Lee’s Summit, Missouri, for 2020.

The Charno Award is named after George Charno, Sr., a Kansas City attorney who established the award in 1940. Each year, recipients are chosen among students who are named to Who’s Who at UCM. Who’s Who recognizes students who are well-rounded and who have contributed to campus in a variety of ways. Selection is based on a combination of criteria, which include: leadership, scholarship, character, involvement in campus organizations and extracurricular activities, service to the university, and involvement in one’s academic department.

Charno Award recipients are annually honored publicly during spring commencement. Because the spring 2020 graduation exercises were postponed due to efforts to prevent the spread of COVID-19, Fine and Breedlove will be formally recognized during the rescheduled commencement activities, Aug. 1. Both students exhibit many qualities that exemplify individuals for whom the award is intended.

Throughout his education at UCM, Fine has been active in a variety of leadership activities, including the Student Government Association, where he began his service as a senator, then progressed up the leadership ladder to become vice president and president. He has been involved in the Honors College, which requires a capstone project. For Fine, this entailed a bioethical analysis of a student health fee, a measure which SGA ultimately proposed while he was serving as president, and was approved by the Board of Governors.

Fine is active in Sigma Pi fraternity and has experience serving on the Judicial Board that oversees Greek Life on campus. He has promoted student involvement in the democratic process as a student coordinator for the American Democracy Project. Additionally, he served as a freshman orientation leader, academic resource coach, and on numerous university committees and advisory boards.

He has received recognition through the Young Family Scholarship honoring a political science student and has been named to the Dean’s List each semester that he has attended UCM.

Breedlove worked in Academic Advising as a Success Coach for approximately three years, and in 2019 was promoted to Senior Success Coach, where she began training other Success Coaches. She has served as a Peer Advisor for Career Services, and a teaching assistant for multiple courses on campus. These include the University Foundations and Exploring Majors course for the Open Options program and the Career Readiness course through Career Services. She earned Peer Educator Certification through the National Association of Student Personnel Administrators.

On her way to completing her education at UCM, Breedlove worked as a student assistant in University Housing, served as a Mule Team leader, student ambassador, orientation leader, and was president and vice president of UCM's Society for Child and Family Development. A testament to her academic dedication, Breedlove was a nominee for the Learning to a Greater Degree Award in 2018 and nominee for the Student Employee of the Year Award in 2019. In addition to making the Dean’s List every semester, she was awarded the Harmon College of Business and Professional Studies’ Child and Family Development Student of the Year Scholarship last year. Upon graduation from UCM, she will be a Certified Family Life Educator.