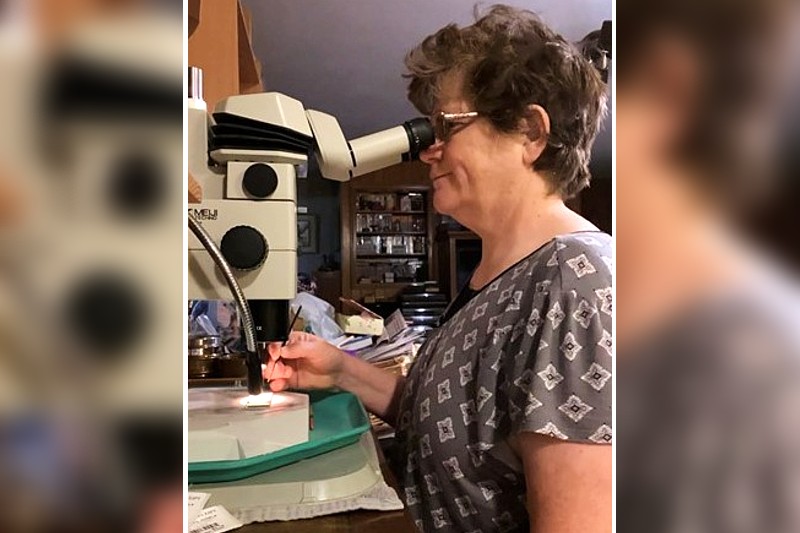 WARRENSBURG, MO – When discussing the impact of global warming, many skeptics often cite examples of glaciers that aren’t retreating as a way to support a belief that human-induced climate change doesn’t exist. Recently published research involving a University of Central Missouri professor, however, shows that new models depicting the long-term nature of glacial movement can demonstrate the pitfalls of making such an assumption.

That is the view of Dr. Sally Zellers, professor of geoscience in the School of Geoscience, Science and Safety at UCM. She is the second author on a research article led by Dr. Ellen Cowan, a professor at Appalachian State University, published in April 2020 by “Nature Communications.” Ten other researchers who were part of the International Ocean Discovery Program (IODP) contributed to the article titled, “Sediment controls dynamic behavior of a Cordilleran Ice Stream at the Last Glacial Maximum.”

“A lot of times, people who argue against the idea of climate change caused by humans will point to a glacier that is actually advancing rather than retreating,” Zellers said. She noted that some individuals believe an advancing glacier is a sign that warming temperatures caused by greenhouse gases aren’t affecting these large icy masses.

“What they don’t realize when they are doing that is that this particular glacier is responding to local controls or processes rather than global. But in the end, the global processes will take over,” she said.

Research that contributed to the article started in 2013, and involved a number of scientists who spent about two months in the Gulf of Alaska, in part, studying glacial marine sedimentology for IODP’s expedition No. 341. IODP is an international marine research collaboration which uses ocean-going research platforms such as drill ships to explore the Earth's history and dynamics. Their work creates data that is generated from seafloor sediments and rocks in addition to monitoring sub-seafloor environments. Scientists from around the world are selected for IODP expeditions, where they may work shipboard, or in the case of Zellers, conduct shore-based research.

The study utilized long core samples to look at the Bering Glacier from the perspective of the sediment that gets transported out to sea by icebergs through a process called “ice rafting.” Zellers’ research focused on looking at foraminifora (forams), which are microscopic single-celled organisms that live in the water or in the sediments. They die and they accumulate and researchers can look at the diversity of these different creatures and gain insight into the paleoenvironmental conditions, she said. Researchers gain information about the history of the location, including helping to determine where the edge of a glacier was at a particular point in time.

“So that’s how we kind of started out. We (Zellers and Cowan) were both looking at the same column of mud and asking different questions, then we realized what we were looking at was kind of lock step related. I got different assemblages of the fossils when the ice rafting was abundant. And I got different assemblages when there was no ice rafting, and then there were times when this particular area was ice free but also when the ocean conditions had less oxygen (we call this the oxygen minimum zone).”

From the core samples, the researchers learned more about how glaciers respond to different environmental changes over time.

According to Zellers, “Glaciers are kind of like bulldozers. They are moving downhill slowly. They have the ability to cut into bedrock, and some of that bedrock gets broken up into small bits of sediment. Then the glacier moves that sediment downhill due to gravity to its end, its terminus.”

“This particular type of glacier is called a ‘temperate glacier’ because it is not in a polar climate but in a warmer climate. So in a polar glacier, the glacier is literally frozen to the bedrock, but in this kind of glacier, it (temperate glacier) is actually moving on a sheet of water at its base. So there’s a lot of meltwater at the base, and all that meltwater has sediment in it. The sediment is delivered at the terminus.”

Zellers said the combination of meltwater and deposits of sediment piling up comprise the local processes that contribute to stopping the glacier from advancing – at least temporarily.

“I think that is the message our paper brings. It is simply that at times in the history of a glacier the local processes will control the behavior of the glacier. But in the end, the glacier will not handle atmospheric warming,” she remarked. “That’s what we’re documenting. This glacier stopped responding to its local processes and ended up retreating to where it is now, which is on land and not extending out onto the continental shelf.”

“That is the summary,” Zellers said. “Local processes can control the behavior of the glacier and need to be considered when looking at modeling the long-term behavior of glaciers.”

Zellers, who has been on the UCM faculty since 2003, plans to continue her work with IODP in 2021. This time, however, she will travel to Japan to conduct research related to earthquakes and tsunamis. To read the recent research article in “Nature Communications,” go to https://rdcu.be/b3y88.