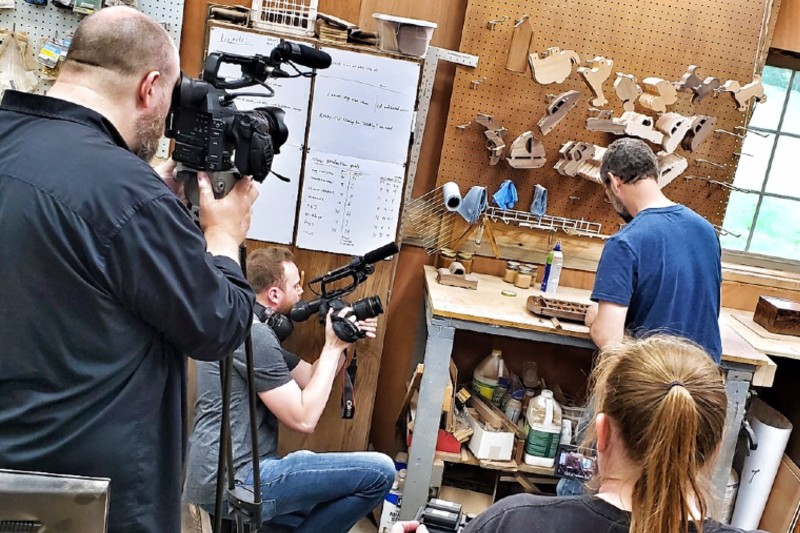 Receiving a Silver Telly in the Food-Beverage category was a story highlighting the Green Truck Bakery, located in Warrensburg, Missouri. Known for breads baked in a wood-fired brick oven, the bakery is run by Carl and Carmen Schick, who distribute their artisan hearth breads through local farmer’s markets and restaurants.

Other stories receiving Silver Tellys were those highlighting multi-media artist Sarah Nguyen, and Hear the Art Studios based in St. Charles, Missouri – both in the Non-Profit category. Four other stories were recognized with Bronze Telly Awards, three in the Documentary category. The first was the premiere episode featuring the annual conference of the Blacksmiths' Association of Missouri (BAM), Three Trees Workshop in Warrensburg, Peggy King of Snowflake Glass, and McCracken Saddles and Tack in Blue Mound, Missouri. The story on BAM earned its own Bronze Telly, as did another story on the Kansas City Woodturners. In the Food-Beverage category, a feature on the Public House Brewing Company earned a Bronze Telly.

About KMOS-TV
KMOS serves the citizens of 38 central Missouri counties with high quality, educational content and experiences online, over-the-air and in our communities. It is integral to engaged learning as a professional learning lab for students from a variety of disciplines at the University of Central Missouri. KMOS-TV broadcasts programming on four channels throughout the region with programs for all ages on 6.1, lifestyle and how-to programs on 6.2, news, dramas and more on 6.3, and a full schedule of kid’s programming to fit the schedule of every busy family on 6.4.

About the Telly Awards
Founded in 1979, the Telly Awards annually showcases the best work created within television and across video, for all screens. Receiving over 12,000 entries from all 50 states and five continents, Telly Award winners represent work from some of the most respected advertising agencies, television stations, production companies and publishers from around the world. The Telly Awards recognizes work that has been created on the behalf of a client, for a specific brand and/or company (including your own) or self-directed as a creative endeavor.

The Telly Awards are judged by members of the Telly Awards Judging Council, a group of over 200+ working industry who have previously won the Telly Awards highest accolade and as such, have demonstrable expertise in the categories they review. Learn more at tellyawards.com.