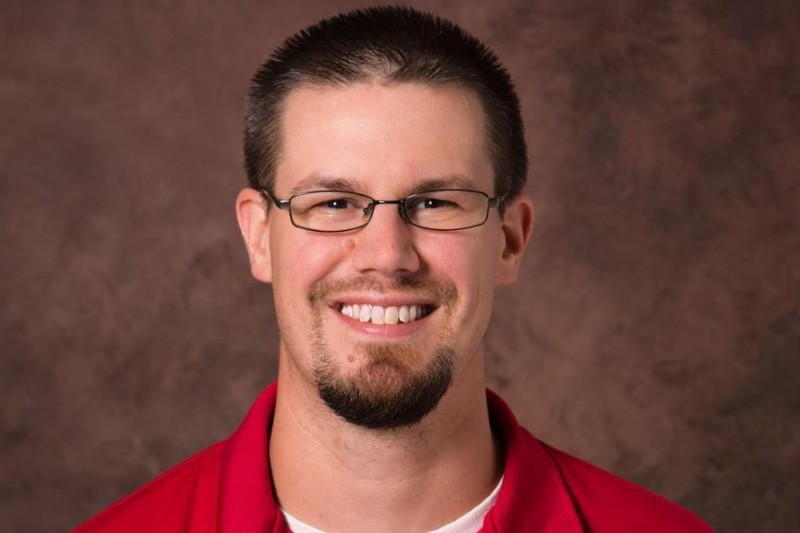 WARRENSBURG, MO – Described by his supervisor as someone who is intuitive, strives for excellence, and is a problem solver, Sam Schleicher has been named the 2020 recipient of the Foster-Inglish Award for Outstanding Achievement and Service in Public Relations at the University of Central Missouri.

The award was created in 2000 to honor outstanding work in the university’s Office of Public Relations, which today is named Integrated Marketing and Communications (IMC) to reflect the multi-faceted communications responsibilities shared by staff members. The award was made possible by John Inglish, university director emeritus of public relations, who established an endowment through the UCM Foundation the year he retired to honor his longtime friend and mentor, Carl Foster, who retired as director emeritus of public relations in 1986 after 19 years of service to the university. Inglish, a longtime Warrensburg resident, devoted more than 27 years to UCM’s public relations office before he retired in 2000.

A resident of Green Ridge, Missouri, Schleicher came to UCM in September 2016. He currently serves as a communication specialist, playing a major role creating and executing university strategies related to the use of social media. He also dedicates time to students as a co-advisor for the Innovative Public Relations program, a joint effort between IMC and the academic public relations area to provide students with real-life experience operating their own PR firm. As a communication specialist, Schleicher works in a fast-paced medium that often requires monitoring and responding during evenings and weekends, in addition to his daytime duties.

“I’m in a unique position that gives me the opportunity to communicate directly with our campus community on a daily basis, which I truly enjoy,” Schleicher said. “Whether I’m sharing important campus announcements, answering questions from students and parents, or highlighting accomplishments from across MuleNation, I consider it an important responsibility to communicate quickly, clearly and creatively on behalf of the university, and I’m proud of the role I play in that communication.”

Kelly Waldram Cramer, IMC director of marketing and promotion, made the award presentation during a staff meeting in late June. She pointed out the award recognizes achievement and service of regular, full-time members of the university’s PR (IMC) staff. Schleicher becomes the 18th person to receive the award since its inception.

Waldram noted about Schleicher, “It is a great privilege to present the Foster-Inglish Award to Sam. It is a pleasure to work with him, and to witness his continued growth as a valued staff member who is highly dedicated to the university and its students. While Sam always strives for excellence, this year he especially deserves recognition. He has demonstrated great leadership throughout the pandemic, something we are still navigating, and has proven himself to be a strategic thinker and a true collaborator.”

She added, “Sam is a tremendous asset to the university. We deeply appreciate his service in IMC, and are honored to have him on our team.”

Schleicher said he was pleased to be selected for the award. As he put it, “Receiving the Foster-Inglish Award is a tremendous honor. I’m humbled and grateful for the recognition, and consider it a privilege to work alongside so many creative and talented people at an institution that is making a lifelong impact on the lives of students.”

Schleicher graduated from the University of Missouri-Columbia in 2010 with a bachelor’s degree in journalism. After producing digital content and managing social media for several television and radio stations, he began working in higher education when he joined the Marketing and Communication staff at State Fair Community College in Sedalia. He was working for State Fair when he was hired by UCM.

Schleicher and his wife, Liz, are the parents of two children.