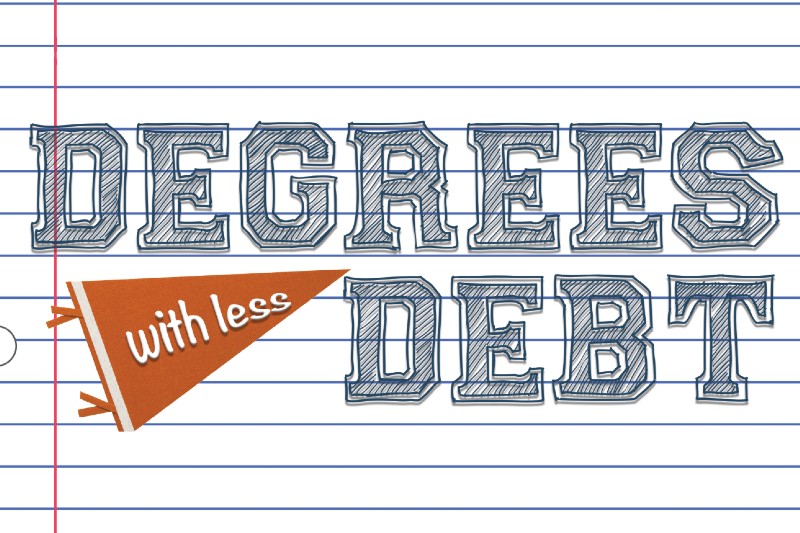 WARRENSBURG, MO – The University of Central Missouri has been identified among five colleges and universities leading the charge to support low-income students and Black students to graduate from college with less debt. UCM’s work in this important area are noted in the report, "Degrees with Less Debt: Postsecondary Strategies that Enhance Low-income and Black Student Success," to be released by St. Louis Graduates on July 15.

The report highlights strategies at five colleges that stand out in a statistical model as enrolling significant percentages of low-income students and Black students and supporting them to graduate with less debt. St. Louis graduates commissioned the report, which is by Janet K. Holt, Ph.D., professor emeritus at Southern Illinois University-Edwardsville (SIUE).

“The Degrees with Less Debt research focuses on what is more important - ensuring students not only enroll in college but graduate with a degree that benefits them and our community - and doesn’t put them into debt for the rest of their lives,” said Amy Murphy, chair of the St. Louis Graduates Degrees with Less Debt Task Force that guided Holt’s research and director of Donor Relations and Scholarships at St. Louis Community Foundation.

“We are grateful that our faculty, staff, and students have been recognized again for their success in a vitally important area of work for all us,” said Phil Bridgmon, provost and vice president for Academic Affairs. “UCM is committed to continuing our collaboration with St. Louis Graduates and our partners in the Post Secondary Equity Network to advance our collective goals of equitable outcomes in higher education. These efforts fulfill our mission of graduating citizen leaders who go from UCM and strengthen our communities and state.”

The report finds several common themes among colleges effectively supporting low-income students and Black students including a focus on affordability, including need-based financial aid and financial aid advising that helps students make informed decisions about debt; institutional leadership committed to equity; pro-active academic supports; and critical wrap-around services, including mental health. While the report acknowledges that much has been done at highlighted institutions to support low-income students and Black students, interviews conducted for the report indicate significant additional work needs to be done for students, particularly Black students, to feel safe and supported in college.

“We are excited about the new Degrees with Less Debt video series which highlights the perspectives of students and those of us in higher education and in the community who want to help them achieve their goals,” said Melissa Findley, Co-Chair of St. Louis Graduates and Executive Director of Missouri Scholarship & Loan Foundation.

“The only way we can reach our goals for a trained workforce is to focus on degree completion for low-income students and Black students. The Degrees with Less Debt research gives St. Louis Graduates and its partners a play book for how we work toward equity in degree completion,” said Trent Ball, co-chair of St. Louis Graduates and assistant vice president for Academic Diversity and Outreach, Academic Support Centers, Southeast Missouri State University.

Launching with the release of the 2020 Degrees with Less Debt report on July 15, the new video series Degrees with Less Debt will focus on the barriers facing low-income students and Black students and what colleges and universities can do to create a higher education system that supports these students. The video includes interviews with administrators and students from each of the five institutions highlighted in the report, as well as community partners. A Twitter chat will follow the release of the report and video to foster discussion of key issues raised within the video including: how the systemic barriers of race and class are holding back students, how the COVID-19 era has exacerbated inequities, and why collaboration engaging institutions, community partners and students is the path forward.

Individuals interested in registering for this virtual event should visit dwldstl.org and join St. Louis on Wednesday, July 15, 2020 at 2:00 p.m. via the above link for the series premier and immediately following at 2:30 p.m. via Twitter at #DWLD for the post-episode discussion.

The new report is the second in a series of Degrees with Less Debt reports commissioned by St. Louis Graduates. The first, released in 2017, identified effective policies and practices of four-year colleges and universities graduating low-income students, first-generation students, and students of color. That report led to a collaboration that included UCM with four other Missouri colleges - Maryville University, Southeast Missouri State University, University of Missouri-St. Louis, and Webster University. This collaboration was subsequently recognized as a Talent Hub, one of 26 collaborations supported by Lumina and Kresge Foundations for accelerating degree completion for underrepresented students.

“College value and college debt are twin concerns for all students, but for low-income and black students, they can represent the difference between an opportunity and a barrier to flourishing in life,” said Chris Beggs. executive director of Academic Support Services at UCM. “Reports like this show that colleges and universities that make the commitment can also make the difference for these students. There is much more work to do, but we can be encouraged and revived by the work that's being done here and elsewhere. Students are savvy - they will go where they believe the university is for them.”