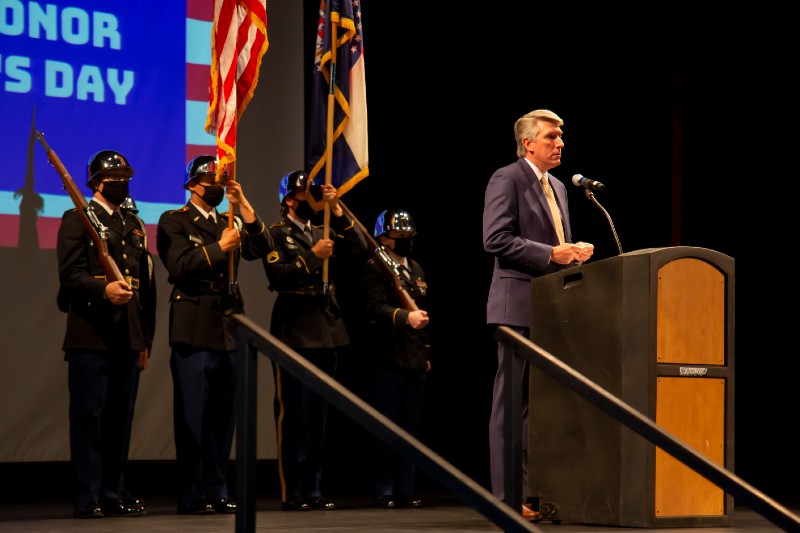 WARRENSBURG, MO – While terrorist acts that occurred Sept. 11, 2001 on American soil still live vividly in the minds of many United States citizens, whose lives were forever altered on that date, a younger generation that includes college students may one day look at 2020 as a year that changed their lives. That message was part of a speech by Army Lt. Col. (Ret.) Gareth Young, who presented the Patriot Day remarks in Hendricks Hall.

Young, who is also an adjunct professor in Military Science and Leadership, spoke at an event that was initially planned for the university quadrangle, but was moved indoors due to inclement weather. The university Office of Military and Veterans Services coordinated the annual Patriot Day ceremony, which included the UCM ROTC color guard, participation by members of the UCM Department of Public Safety, and the Warrensburg Fire Department. Other local emergency responders and active duty military and veterans also attended and were recognized at the closing of the program.

In his welcome to the gathering, UCM President Roger J. Best noted that 19 years ago, almost 3,000 civilians, police officers, firefighters, first responders, and military personnel died in a coordinated terrorist attack. This carefully orchestrated plan utilized commercial airplanes that were all hijacked and flown into targets that included the World Trade Center in Manhattan, New York, and the U.S. Pentagon in Arlington, Virginia. Another attack using an airplane was thwarted by passengers who perished in a field in rural Pennsylvania while trying to prevent hijackers from taking over their flight.

“In the 19 years since, more than 7,000 service men and women have died in the war on terror. Today, even though we remember everyday what happened, we spend extra time not only to remember but to honor, lest we forget.”

In his remarks, Young said, “Nineteen years ago the tragic events of 9/11 struck our country and changed our world. They say that every generation has some defining event that changes things and makes the world at least a little different. For many of us 9-11 was that event.”

“So think for a moment,” he continued, “19 years ago, most traditional students here don’t remember that event, or in some cases, weren’t even born. For those of you less than 30 (years old), your world-changing event might be what is occurring right now with COVID-19 pandemic. A year ago, I doubt if anyone here would have thought we’d be walking in public with masks on and lecturing with our mouths covered.”

He recalled speaking to another man about a month and a half ago. “The conversation naturally came around to the pandemic, and we tried to remember the last time we had shaken hands with anyone. Our world is different than it was a year ago. We would assume that a year from now we won’t be wearing masks but likely some things will have changed.

“Our world before 9/11 was different too,” Young said. “Those of you old enough may remember when you could board an airline with no security or with much less security than you do now. We had experienced terrorist attacks. Oklahoma City seemed to be the most significant, but largely we considered the U.S. safe,” he told the audience. “Large-scale attacks with thousands of victims happened elsewhere, not here; 9/11, like COVID-19, was a tragic event that forced us to change our world.”

Young has a rich heritage as an educator at UCM and has a distinguished military career. He served 25 years in Army, including completing combat in Operation Iraqi Freedom, Operation Desert Storm, and Operation Just Cause, the 1989 invasion of Panama. He also served four tours of duty in Korea, and had an assignment as a military adviser to the Saudi Arabia Ministry of Defense. This is in addition to six years spent as a paratrooper.