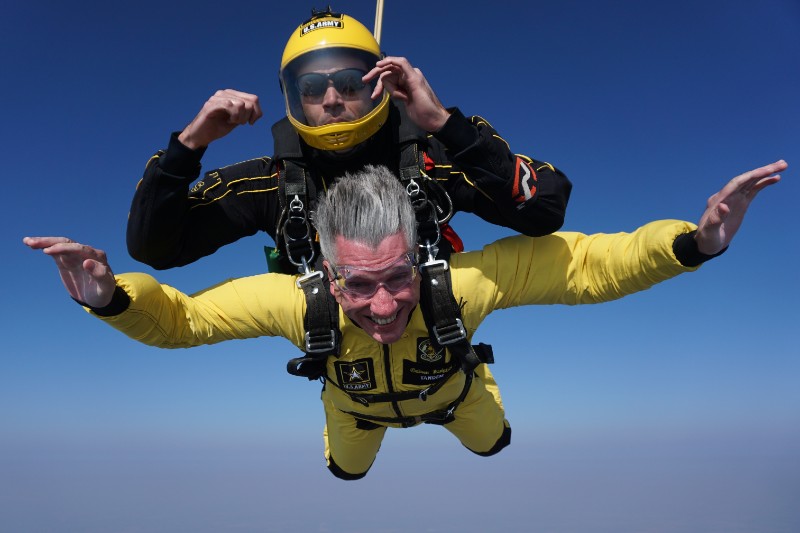 Seconds after making a leap from an Army airplane, Roger Best, president of the University of Central Missouri, and Golden Knights tandem team member, Staff Sergeant Dan Osorio make their descent back to earth in a freefall after starting at 12,500 feet above the Butler Airport. (Photo courtesy of Army Golden Knights)

WARRENSBURG, MO – A strong supporter of the United States military, University of Central Missouri President Roger Best got a glimpse of what it’s like to be among an elite group of men and women in service after accepting an invitation to join the Golden Knights on a tandem parachute jump.

Best and his wife, Robin, traveled to Butler Airport, Oct. 6, where they met with members of the Army’s premier parachute team, a group that has traveled and performed in exhibitions all across the globe for approximately 60 years. The opportunity was made possible by UCM’s Army ROTC cadre through the unit’s cadet command.

Best was one of a number of area educators and community leaders who were invited to participate in the Golden Knights Tandem Team program, which took place in cooperation with Skydive Kansas City. He was the only university president to join the tandem team on the near perfect fall morning.

“Our role and mission with the tandem team is really to connect the American public and the American Army with a firsthand experience,” said Sergeant First Class (SFC) Richard L. Sloan, a Golden Knights paratrooper.

In this manner, Sloan said the Golden Knights hope to introduce private citizens to what “it’s like, just for a few minutes, to be a U.S. Army soldier facing fear, adversity and danger all the while having the trust and confidence of that soldier who is on our back.”

During the exercise, each civilian participant was paired with an experienced member of the Golden Knights, who worked in tandem with each guest to make the jump from an altitude of approximately 12,500 feet. Before taking off in a twin-engine Army airplane flown by one of the team members, all of the participants completed a brief safety session with the Golden Knights, and were also fitted with proper gear. For many participants, including Best, this was the first time they ever skydived. The opportunity allowed them to experience a freefall of about one mile before their chute opened and they gently glided back to earth.

“The Army has multiple parachute demonstration teams, and as you walk through the upper echelons, these guys are the top of the tier,” he said. “The guys jumping together on this tandem include several gold medal holders in competitive skydiving and the gentleman who is with President Best is actually a world record holder for skydiving. One of them has over 4,500 tandem jumps, so you are dealing with a lot of experience and a lot of professionalism with the Golden Knights.”

Within a few minutes after taking off, Best was back on the ground safely, and excited to share the details of his experience. He called it “amazing,” particularly the freefall.

“There’s an amazing rush of wind that you get hit with,” he said, in describing what it’s like to step out of moving airplane. “As you are plummeting toward the earth, it’s hard to imagine you are up there falling without any parachute behind you, then all of a sudden the chute opens and it’s just a nice drift down.”

“Anytime you think about jumping out of an airplane that’s still flying, it makes you a little bit nervous,” he said, “but when you think about doing that with the finest parachute team in the world, you can’t do it any safer way. I was just talking to my instructor and my tandem partner and he said he does 500 to 800 jumps a year, so this is something that’s his profession. It’s something he loves, and he does it to serve us, so it’s my honor and privilege to be able to jump with him today.”

Best equated his experience to what it means for students to experience opportunity in action at UCM. He said the university provides students with an “education that will make a difference in their lives, but that opportunity doesn’t make any difference to you unless you take advantage of it, so you have to take action within the opportunity.”

“I know it can be fearful to step out and do something that is new and different and risky, but without risk you don’t get rewards. So step out and do what you can do to honor your life and honor those who are around you and support you,” was Best’s advice to students.

Stepping out of an airplane for him was a way to honor the men and women who serve this country, including UCM's ROTC Fighting Mules Battalion, and to remind students to live their lives with purpose.

Any nervousness that Robin Best may have initially experienced prior to her husband’s skydiving disappeared when she saw him back on the ground.

“It’s something he has wanted to do since he was in college. To see him come down and have a smooth landing, that was really good. I’m glad he did it and I’m glad it’s done,” she said smiling.

UCM’s First Lady also echoed the president’s comments about taking advantage of opportunities. As she noted about her husband’s experience with the Golden Knights, “I think it’s a good example. There’s just nothing you can’t do if you set your mind to it.”