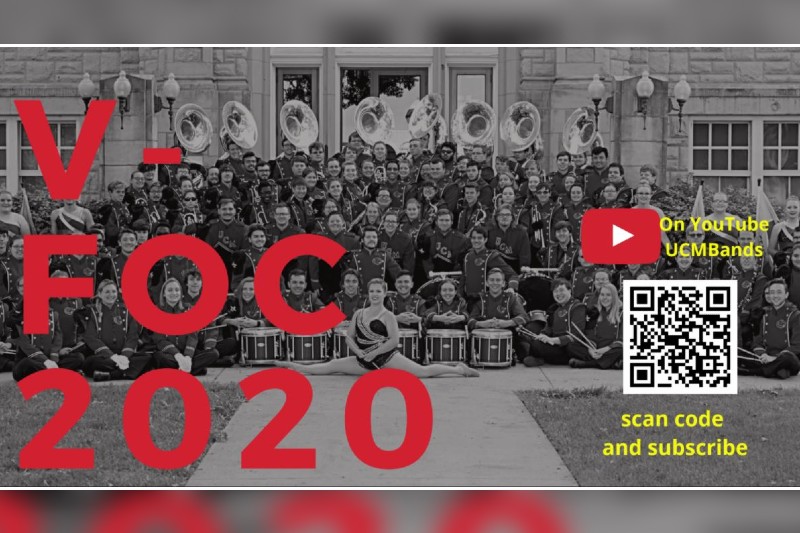 WARRENSBURG, MO – After more than 40 years of showcasing live high school marching bands in what has evolved into the Festival of Champions, the University of Central Missouri will host the 2020 fall event in a virtual format. The event, which includes both a competitive and non-competitive circuit for field shows, indoor percussion, and/or indoor color guard, takes place this Tuesday, Wednesday, Thursday, (Oct. 13-15) and Saturday, Oct. 17 with an awards show culminating the event at 5 p.m. (CST). All events can be seen free via live streaming video on the UCM Bands YouTube channel.

“One hundred bands from coast to coast signed up to participate in this event, with 75 bands and groups from Missouri,” said UCM Director of Athletic Bands and Assistant Director of Bands Dr. Julia Baumanis, “Overall, there are 7,000 participating student musicians and color guard performers. Along with their band directors and band family, this event has the potential to reach a very large audience.”

Individuals who go online to watch the Virtual Festival of Champions Award Show also will see an exhibition performance from the UCM Marching Mules, Percussion and Color Guard. The awards ceremony will honor winners in various competitive categories. Students involved in the UCM Digital Media Production program under direction of DMP faculty members Dr, Joe Moore and Scott Hofsommer are producing the entire show, which is expected to last about one hour. The virtual program also will include opportunities to hear from special guest speakers that include UCM administrative leaders; renowned band composer Frank Ticheli; members of the Boston Brass, a special guest from of Marvel Films Studios, and more.

“This is such a remarkable expansion of the festival’s scope as a nationally visible event – not to mention a Herculean task during COVID-19,” said Dr. Albert Kim, assistant professor of music and coordinator of UCM concert publicity. He pointed out UCM music students are playing a substantial role in producing the event as well as adjudicating the participating ensembles in a format that resembles a sports drafting ceremony.

High school band directors from across the nation were given the opportunity to register online for the event, and to indicate if they wanted to be adjudicated. They had the opportunity to submit a video of their marching band that was taken either by smartphone or by advanced-level video equipment during a band rehearsal or a live performance at their home stadium.

A panel of judges that includes adjudicators from around the country views each performance and provides feedback and a score, much like the live event. All assessments and comments will be shared with each band director at the conclusion of Festival of Champions. Additionally, rankings for the competitive teams will be announced at the end of the live-streamed show, similar to what takes place in the finals round of the live competition.

The viewing schedule is as follows:

In cooperation with music faculty and staff, UCM has become a Midwestern hub for seeing in action some of the best high school bands in the region through the annual Festival of Champions. The event began in 1978 as the Missouri Music Bowl, but grew into a showcase for more than 30 bands from Missouri, Kansas Arkansas, Nebraska and Illinois.

Dr. Anthony Pursell, UCM’s director of bands, said that “This year’s event was initially scheduled for October 17, 2020 at Audrey J. Walton Stadium, but due to concerns over the pandemic, it was re-designed to culminate on that date in a completely virtual format to provide a safe experience for all while also providing an opportunity to expand its reach and to showcase more of the nation’s top high school bands.”

The competition will also spotlight a tribute to all high school seniors. “For most of these students, COVID has taken away their final opportunity to put on a band uniform as a senior member of their ensemble, and we know that weighs heavy on them,” Pursell said. “My own son is only a sophomore, but I put myself as a dad into this festival to give the students a little something special. We hope that it brings a smile to these students, their directors, and their families at a time when COVID has taken so many opportunities away.”

While the Festival of Bands provides an opportunity to raise funds for scholarships for music students, representatives of UCM’s music program are reaching out to corporate sponsors to help assist with costs and to gain financial support to help students in pursuit of their college education.

Learn More About the Virtual Festival of Champions